The District has been home to world-class jazz musicians since Duke Ellington’s early days, but historically – and in the past 50 years especially – the city has suffered from a shortage of venues where these artists can showcase their talents. This continues to be the case, to some degree, but along with the resurgence of the city over the past 15 years or so, there has also been growth in the number of nightclubs that are willing to book jazz acts. This is also true of certain larger venues that have opened recently, like the Hamilton and the refurbished Howard Theatre. Now that growth is spreading to the suburbs, with the addition of the Bethesda Blues & Jazz Supper Club, a theater in the guise of a club, which opened in March.

BB&J, as it is sometimes called, is the dream of Rick Brown, a local native and real estate developer. He comes from a musical family that includes veteran pianist Larry Brown. “He had a vision of an old-fashioned supper club, in the Copacabana feel,” said Gillian Moloney, the club’s social media and marketing director.

Brown also wanted to take advantage of the historic art deco architecture of the building itself. Constructed in 1938 as the Bethesda Theatre, the edifice was once among the area’s largest cinemas. Walking into the club to see the band Chaise Lounge perform this past Saturday, I felt like I was walking through a time warp, or into a movie. The club’s foyer has the look of classic Hollywood and opens into a stylishly appointed bar area. Just beyond the bar is the listening area, which features table seating for 300 near the stage, and theater-style seating for an additional 200 at the back of the room. On this evening, the astronomically inspired artwork, sleek decor, and subtle lighting created the perfect ambiance for the band’s vintage Capitol Records sound. The well-designed audio system provided crystal-clear fidelity. And the professional, efficient wait staff made the experience all the more enjoyable. 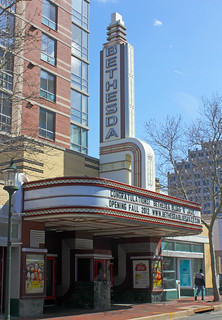 Ralph Camilli, who runs BB&J’s day-to-day operations, has over 35 years of experience within the local music industry, having worked at storied venues like the Cellar Door and Blues Alley. His current plan is to feature daily performances and full-menu dining all year round at the club. The current programming features mainly local and regional acts during the week, including a resident big band on Monday nights, and bigger names headlining on weekends. Branford Marsalis will perform in May at BB&J’s “Grand Re-opening,” which coincides with the building’s 75th anniversary.

But BB&J also goes beyond the musical scope that its name implies. “In the second week of March we featured Maggie Rose, the rising country star, for two nights,” Moloney said. “We’re also looking to book some big-name comedy here in the summer.”

For Saturday’s Chaise Lounge performance, the dining area was nearly full, but there was no need for the theater seating. The crowd that evening was largely comprised of middle-aged folks, which is expected given the night’s music and the club’s suburban appointment. Moloney says that most of BB&J’s draw comes from the surrounding suburbs, with typical ages ranging from early 30s to 60s, depending upon the evening’s show. And it’s doubtful that the room will draw younger adults, given the price point the operation has chosen: The cover charge starts at $20 and goes up depending upon the feature’s prominence. There is also a $15 food and drink minimum for those seated in the dining area. The food was very good, but $15 doesn’t get you much beyond a beer and an appetizer. Cover plus a full meal and drinks will easily run up a $75 tab per person. This is not an unreasonable bill for this type of establishment, but it will exclude a lot of people.

All in all, BB&J holds a lot of promise as a welcome addition to the area’s music and arts scene. Rick Brown and his team began with a clear vision and did not cut any corners in bringing their concept to fruition. Only time will tell whether it becomes a sustainable endeavor.

“We’re in a very culturally aware and culturally sensitive place right here,” Moloney said. “I think we’re definitely meeting a need here, which is such a good feeling.”