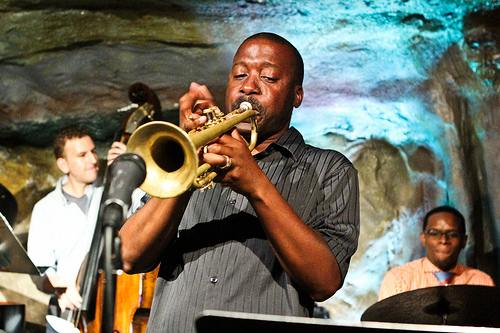 Kenny Rittenhouse has developed a reputation as one of the DMV’s most versatile and virtuosic trumpeters, able to bounce between classical music and various sorts of jazz with the poise of a true master. His sophomore album, New York Suite, further exhibits him as a gifted composer, crafting complex lines and harmonies, all the while making great use of his excellent group.
top 5 albums of 2013
New York Suite is No. 5. Read CapitalBop’s full list.

Rittenhouse recorded it in January with a septet featuring some of the usual suspects of the District jazz community’s top brass. It’s little wonder that the pianist Allyn Johnson, the trombonist Reginald Cyntje, and the saxophonist Lyle Link continuously crop up on District artists’ liner notes – these are simply three of the most well-versed and sensitive jazz musicians playing today, anywhere. The seasoned bassist Romeir Mendez, the veteran drummer J.C. Jefferson, Jr., and Rittenhouse’s fellow Army bandmate, the saxophonist Antonio Orta, round out the ensemble. 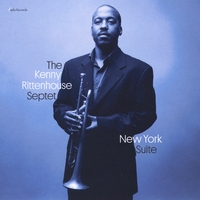 The album opens with “Seneca’s Dance,” a polite salvo; as the title might suggest, the tune is a medium-tempo, hard-swinging blues, a great way to warm up to a classic-sounding recording. Next is ”Last Train to Harlem,” the first movement in Kenny’s “New York Suite,” a three-part piece with tracks scattered throughout the album. A very interesting tune once the title is realized, the continuous line from the piano and bass is reminiscent of the Nuyorican clave, a standout in the culture of Harlem. Though set in 3/4 time, the feel is very similar to much of Duke Ellington’s Latin-tinged work, complete with the intricate melodic line shared by the horn section.

For the second movement, Rittenhouse nixes the Latin and goes for straight, hip-hop-tinged 4/4. “Kaela’s Song” is a moody and contemplative track: Its structure is almost that of a brief history of a portion of New York jazz. The introduction is a John Coltrane-like dirge, beautifully showcasing Link’s deeply emotional improvisational prowess. With a quick count-off from Jefferson, the tune shifts into the more modern New York, the gritty city of the early ‘90s, the Mo’ Betta Blues era. This is certainly one of the standout tracks.

The third movement, “East 21st Street,” is dedicated to Rittenhouse’s wife, Stacey Cohen, who, according to the liner notes, “will forever be a New Yorker.” The tune’s swift hard-bop feel definitely conjures the feeling of a Big Apple on the move, with a pleasant surprise just before Rittenhouse’s solo: The tune changes abruptly to a funky groove, and the trumpeter riffs over the top. Cool and comfortable, he is clearly at home in a New York state of mind.

The track “Let Me Loose” was written by Johnson, and is one of only two not penned by Rittenhouse. Befitting of the album, Johnson’s tune swings thoroughly, with overt influence from the hard-bop of the ‘60s. As always, his piano solo is a lesson in itself: Open strong, allow for silence, reference an old bebop tune (in this case, “Cool Blues,” by Charlie Parker), and use your harmonic knowledge to create something original and logical in the moment of improvisation.

Overall, the album is a pleasant offering from a veteran of the area’s jazz community. Other tracks – such as “Penelope,” “A Ballad for Blue,” “Hubtanium” and an interesting arrangement of “Amazing Grace” – add to the sense that this is, in many ways, a tribute album: It is a tribute to the bandleader’s family, his faith, and his experiences. The success of New York Suite is intimately tied to Kenny Rittenhouse’s inspired state while contemplating his son, wife and mentors. All the while he keeps the band swaying, even through the splashes of Latin and hip-hop. It is all a reference to their swinging source.