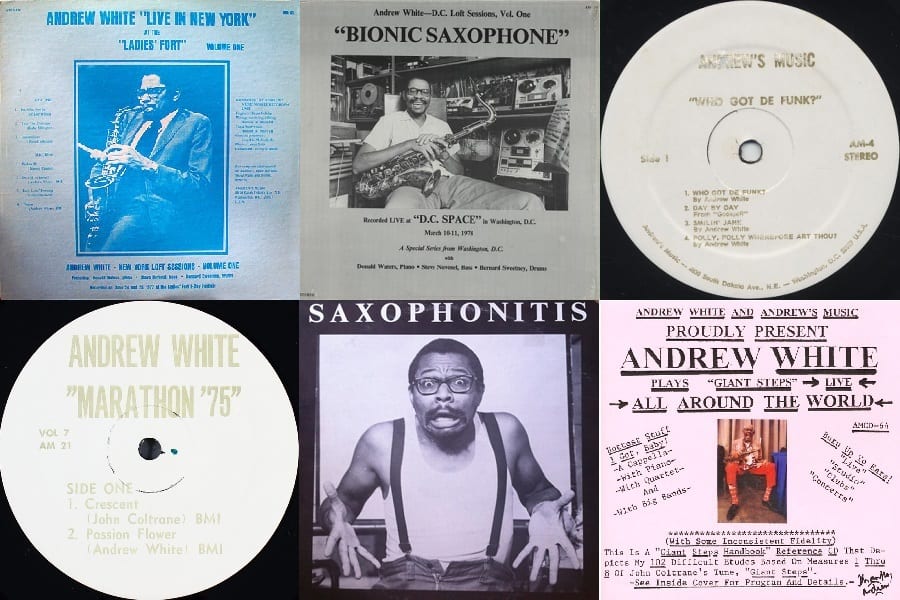 The great majority of Andrew White's appearances on record are on albums (LPs and CD reissues) that he released through his own venture, Andrew's Music. Courtesy Andrew's Music
Features

Longtime Northeast D.C. resident Andrew White is an indelible figure in the jazz world, both here and abroad. As a saxophonist and multi-instrumentalist, he’s played with everyone from Stevie Wonder to Weather Report, while leading a remarkable, nearly 60-year career as a bandleader and John Coltrane scholar. And with 42 LPs in the catalog of his self-run record label, Andrew’s Music, he’s also one of the most devoted musician-entrepreneurs in D.C. history.

But it’s difficult to summarize White in a few sentences. Close study reveals sides of his artistic and intellectual tendencies, all in complex dialogue with one another. White puts it simply: “I’m not a pigeonhole player.”

On one side is a Western classical music composer, arranger and performer, proficient on English horn, oboe and piano. On another is the author of several books — some autobiographical, others more like treatises on the business of music. Then there’s the devoted student, who has transcribed almost every solo John Coltrane is known to have recorded.

And there’s more — including, of course, his performances on his primary instruments: saxophones. Take a look at his recorded output. Beginning with AM-1 (Andrew Nathaniel White III) in 1971, and ending with AM-42 (Profile) in early 1984, the breadth he covers — musically, geographically, instrumentally — is overwhelming. Distilling the many hours of White’s recordings down to a “best of” nugget feels futile. So instead, consider the list below a small sample of a much larger world left to explore, with the selections based on what struck me as a strong representation of White’s diversity as a musician.

White has never made the Andrew’s Music catalog available digitally, so today — with his permission — we are thrilled to offer this sampler of streaming tracks from across his career. And if you’d like to hear this local legend live, the Andrew White Quartet will be giving a rare public performance tonight at Blues Alley, with 8 p.m. and 10 p.m. sets.

On the albums below White plays alto or tenor saxophone on all tracks, unless otherwise noted.

The obvious reply to the album title’s query is, of course, that Andrew White got de funk — all attitude and dynamic swagger. “Part 2”  is one of three tracks recorded at Sunwest Recording Studio A in Hollywood, Calif., with members of the 5th Dimension. (White played electric bass for a time with that pop vocal group.) White says radio DJs at the time “had a lot of fun with that title.” Partly a comic rave regarding man’s eternal search for the funk, this group keeps the groove moving, highlighting the “fun” in funky. Listen and just try not to smile a little. Personnel: Rudy Stevenson (guitar, alto flute, vocal), Montego Joe (percussion, vocal), Mel Lee (drums, vocal), Andrew White (all other instruments)

The title is French for “sad song,” and White’s mournful and delicate voicing on English horn is accompanied by spare piano phrases. Everything here is by White — all the instrumentals, the composition, the arrangement. This subtle, deliberate, slow piece showcases White’s classical chops, showing that his dedication is the same regardless of the genre or sound palette he’s working in.

White cites this album as one of his biggest sellers. His big, rough-around-the-edges, smoky saxophone sound glides at a steady, measured pace. And Killgo’s hushed brushes softly tell you time is passing. A suggestion: On the next rainy day, put this moody track on and watch the raindrops fall outside, and collect on the window, then roll down. Personnel: Kevin Toney (piano), Steve Novosel (bass), Keith Killgo (drums)

Right from the count-in, the quartet is off to the races, with no looking back. White’s soloing is direct and almost confrontational. Perhaps emboldened by the live setting, the group’s sound is unequivocally bold, and loud. The album was part of White’s own series of D.C. Loft Sessions live recordings, recorded at various spots in and around D.C., using White’s own mobile recording equipment. This installment in the series was recorded at d.c. space, the venerated, now-long-gone music venue, on Sep. 23, 1978 as part of a John Coltrane Memorial Weekend Concert. Personnel: Donald Waters (piano), Steve Novosel (bass), Bernard Sweeney (drums)

This is one of several in the “French group” of tracks written by a French pianist and chanteuse who went by the name Barbara. (She was quite popular at one time, White says.) This track conveys the sensitive, even romantic side of White’s music, recalling the memory of a lost love in serious, expressive phrases throughout. White adds that this was his late wife Jocelyne’s favorite song of his. Personnel: Kevin Toney (piano), Steve Novosel (bass), Keith Killgo (drums)

According to White’s album notes, this LP is meant as a gift to the people of Japan for their support during his tours there. This particular song is a Tadd Dameron composition famously recorded by Dizzy Gillespie’s big band in the 1940s, and a twisted take on “I Got Rhythm.” Toney pounds down hard on the keys, while White playfully layers on top, winding through phrases with the movement of a ball bouncing down stairs. It’s pure fun, and the audience, heard at the end, seems to agree. Personnel: Kevin Toney (piano) Steve Novosel (bass), Keith Killgo (drums)

One selection from “A Coltrane Triptych,” which contains noticeably new arrangements of familiar Coltrane tunes. “Blue Train” begins minimal and sultry — lean in close for the extended quiet opening, before submitting to the full bore of White’s attack 48 seconds in. With a track time of just 1:15, it neatly conveys the yin and yang of White’s arrangements. He says that this trio of tracks “did very well for us, too. On the radio they’d play all three of them together.”

A song perhaps woefully familiar — and overdone — to listeners of a certain age (the Diana Ross single hit No. 1 in 1976), White pokes fun at the slight kitsch of the original, but drains it of its sentimentality to reveal the sorrow in the melody, and reducing it to its elemental, melancholic heart. Personnel: Kevin Toney (piano), Steve Novosel (bass), Keith Killgo (drums)

There are several recordings of White’s work with various groups, and are worth finding to get a true sense of his diversity. For starters, pick up Weather Report’s 1973 seminal album, Sweetnighter on which White plays electric bass on three tracks — especially for the mind-altering “125th Street Congress.” Look for the 5th Dimension’s two-record set Live!!, released in 1971; White (credited mysteriously as Andrew “Muff” White) plays electric bass on all tracks but one. For something more refined, there’s “Fountain in the Circle,” on the Lloyd McNeill Quartet’s album, Washington Suite, from 1970. White did the arrangement, and plays oboe as part of the Woodwind Quintet.

Additionally, White recorded two albums with the Beaver Harris Quartet, and played on two historic releases in 1961 and 1962 with the short-lived JFK Quintet, a D.C.-based band that he co-led. Cannonball Adderley helped the quintet — the house band at Bohemian Caverns from 1961 to 1963, Tuesday through Sunday, playing three to four sets a night — get a deal with Riverside Records. Live jazz was being performed regularly then all along the U Street corridor, particularly at the Caverns and at Abart’s Internationale. “There’s nothing like it now,” White said.