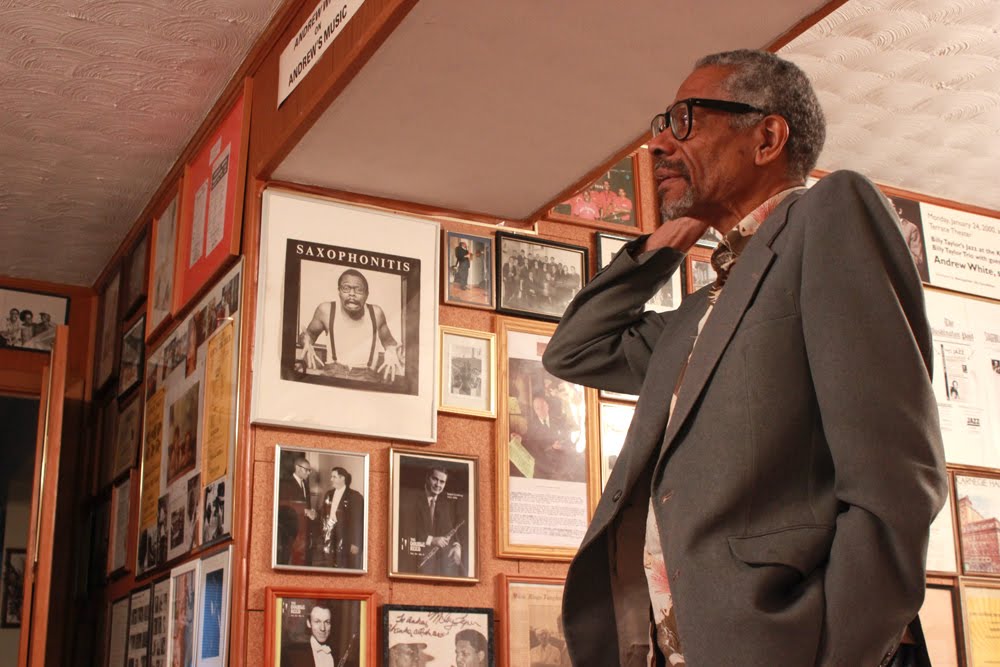 Andrew White, pictured at his home in 2011, released over 40 albums and transcribed more than 800 John Coltrane solos. Giovanni Russonello/CapitalBop
Features

The accomplishments of Andrew White — multi-instrumentalist, composer, arranger, entrepreneur and performer, who made his home in Northeast D.C. for half a century — are as impressive as they are varied.

Recognized throughout the city’s jazz community and well beyond for his prodigious talents on alto saxophone, as well as for his proud, outspoken and endearingly boastful personality, White was always working. He self-produced his music, self-published his world-renowned scholarship on John Coltrane, and self-promoted all of it.

In an unimaginable feat of focus and endurance, White, who died on Nov. 11, transcribed almost every recorded Coltrane solo — 840 transcriptions in total. His work also included transcriptions of solos by other jazz giants, including Eric Dolphy and Charlie Parker. White’s transcriptions of all three artists are catalogued at the Library of Congress.

Born in D.C. and raised in Nashville, White returned to the city in 1960 to study music composition and theory at Howard University. White soon helped found the J.F.K. Quintet, in which he played alto saxophone and served as musical director. It became the house band at Bohemian Caverns, the vibrant jazz venue at 2001 11th St. NW. The group released two albums, New Jazz Frontiers from Washington (1961) and Young Ideas (1962). A third recording remains unreleased. In addition to White’s powerful, energetic playing, the recordings feature several of his compositions.

After he graduated, White’s career developed along a number of diverging paths. He appeared on recordings with Elvin Jones, McCoy Tyner, Beaver Harris, Weather Report, the Julius Hemphill Saxophone Sextet and Otis Redding, before launching his own career. In a live music setting, White performed over the years at the Kennedy Center, Lincoln Center, Carnegie Hall and the Newport Jazz Festival. For more than two years he was a member of the American Ballet Theater Orchestra.

In the early 1970s, after a stint in New York City, White moved back to D.C. and married Jocelyne Uhl, who would often serve as co-business partner behind the scenes, and sold his transcriptions and albums at local shows “She was 100 percent behind him,” said Steve Novosel, who served as White’s bassist for nearly 60 years. “A wonderful, beautiful woman.”

A school teacher by trade, Uhl was also a visual artist, and some of her paintings were portraits of White. He, in turn, would honor her through his music. For example, “Chanson de Jocelyne,” a track from his debut album, was written for her. She inspired other work throughout his career too, including classical compositions and arrangements such as those heard on his album Songs for A French Lady (Dedicated to Jocelyne), released in 1974. The couple remained close in this partnership—in domestic and in business concerns; she passed away in 2011.

Known for his unshakeable consistency, White started his own label and publishing house, Andrew’s Musical Enterprises Incorporated, soon after he and Jocelyne were married. He created his own albums, self-made and self-distributed, complete in vision and in execution. The aesthetics of the album jackets were as straightforward as he was, most featuring gold or black text on white background. (The record labels inside were a simple, practical gold or black text as well.) He made his first record in 1971, catalog number AM-1 (shorthand for “Andrew’s Music”). Titled Andrew Nathaniel White III, it featured White on alto and tenor, oboe, English horn, piano and electric bass, and seemed to announce: I am Andrew White. I am here. Look out! It was the beginning of a run that would last nearly 50 years.

“Everything was his idea,” Novosel recalled. “He’d hire people to come in and record, but he was the last word on everything. It was his record company. He was the producer, the director, the librarian. Everything that it took to have that company was him, all him.”

“I learned how to play fast, playing with Andrew. He played tempos I had never played before. You had to follow him. You either got there or played by the wayside, man,” Novosel added. “He gave me endurance. When I say fast, when you have to play a very fast tempo for 45 minutes, you have to be ready, man. If you’re not ready, you’re not going to make it.”

White owned two adjacent houses in the Michigan Park neighborhood, and the band would always rehearse at the house next door to where he lived. White called that residence “Villa Pablina,” a museum of sorts featuring Jocelyne’s artwork and mementos from White’s diverse, multi-dimensional career. “He could always surprise you with a story. He was very prolific in telling a story,” Novosel said. “It was like poetry in a way.”

White’s musical roles were diverse in its truest sense: His skills on the electric bass earned him touring gigs in the 1970s with Stevie Wonder and the 5th Dimension. He appears on their 1971 recording, Live!! In the credits he’s listed as Andrew “Muff” White, for reasons that can be left to one’s own imagination. He was also on Weather Report’s I Sing the Body Electric (1972) and Sweetnighter (1973). (Check out his sublime bass work on “125th Street Congress,” from the latter album; he comes in around 3:15.)

Additionally, he played on recordings with Otis Redding and McCoy Tyner, and was the principal oboist with the American Ballet Theatre from January 1968 through August 1970. As part of fellow Washingtonian Lloyd McNeill’s quartet, he played oboe and created arrangements on selections from McNeill’s Washington Suite, released on the flutist’s own Asha Records. (Like White, McNeill was a multi-talented artist and impresario; his albums often featured his own visual artwork. Keeping things local, the art was hand-printed by Lou Stovall, a D.C. artist.) McNeill and White had a friendship, and he was credited as the engineer on several of White’s live recordings, managing the live mix as White’s band played.

In addition to the 42 albums he released under the Andrew’s Music brand, White’s legacy is perhaps best embodied in the approximately 800-page autobiography, weighing over five pounds, Everybody Loves the Sugar: The Book: My Autobiography, was self-published in 2001. The cover photograph is of White, in white tank-top and suspenders, holding his hands outstretched, and a mock-comic expression on his face. All pages are either in typewriter text or in White’s exuberant cursive. On the final page, with the company letterhead at the top, the words “The Promise Page” are written. That is followed by a final valediction — the aforementioned promise, which, in typical White style, doubles as one last note of self-promotion: “Life is Beautiful and All of Andrew’s Music is Good for You! Bye!”

Tentative plans are being put in place for an event next September honoring White and celebrating 50 years of Andrew’s Music.