It has been a difficult year, by all accounts, but on the D.C. music scene it’s also been a hopeful one. The list you see below is only the tip of the iceberg: This was one of the strongest crops of recordings that CapitalBop has seen since our team started doing year-end recaps a dozen years ago.

Back then, our staff was just two people. This year we had our broadest base of voters ever, with a nine-person panel weighing in, consisting of CapitalBop staffers, confidantes and well-known contributors to the DMV music-journalism world.

There are some significant notes attached to this year’s list. First, it should come as no surprise — though it’s noteworthy nonetheless — that three of the five albums below are from women-led ensembles, including two of the top three albums. Second, this is the first year that CapitalBop co-founder Luke Stewart (who didn’t vote in this poll) attained the No. 1 spot on our list. (There’s a comprehensive breakdown of the voting process at the end of this article, for those who are curious how we balance our working and personal relationship with Stewart, with the fact that he is an undeniable creative force whom we can’t ignore in our own pages. So-called journalistic impartiality is a tough shake! We’re doing our best.)

We hope you’ll dive into, absorb and enjoy these records. Don’t skip the list of honorable mentions, which features an even wider range of sounds, songs and experiences, reflecting the truly multi-dimensional nature of the D.C. jazz scene. And if you want more, check out the rundown of albums we published over the summer, listing our favorites of the year thus far. Happy holidays and best wishes for the new year! — Jackson Sinnenberg

The Love Chord EP is the debut recording by the D.C.-based tenor saxophonist, educator and producer Allie Wilding. The album is an interesting fusion of electro-acoustic compositions that reflect the fabric of Wilding’s musical style: reverberated, jazz-influenced songs with synthesized beats and, of course, the tenor saxophone, which is layered throughout the echoes of repetitive ornamentations.

Wilding’s sound derives from a number of musical influences, including Zero 7, Massive Attack and Bonobo. As such, this recording stands out from the predominantly improvised and straight-ahead jazz scene in D.C. The music reflects the seed of a new sound that could grow branches and vines, and possibly create new avenues of genre, form and style. — Jordannah Elizabeth

Todd Marcus never misses, and his latest album hits particularly hard. Based on Marcus’s artistic contextualization of his Egyptian heritage, In the Valley is a piece of art as chromatically complex as that heritage demands, with tracks that beg for continued listening. This is especially true of the album’s penultimate cut, “Final Days,” a ballad whose lushness is typical of Marcus’s arranging. It digs deep for emotion, beauty and introspection.

In the Valley presents itself as a holistic and complete statement with tracks that blend and fall into one another. Unity gives way to individuality and back, and buried sonic treasures spill out of the mix early and often, though not so much as to be overwhelming. As a whole, the record builds a rich and complex sonic landscape, a fertile valley where every voice becomes imbued with purpose and meaning. — Abe Mamet

Live @ Jojo’s (Set One) is an otherworldly offering centered on the elements of life in the wilderness. With expressions of duality, chaos, beauty and silence, the 13-track album – featuring Sarah Hughes onsoprano saxophone and effects pedal, Jon Steele on double bass and effects pedals, and Nate Scheible on drums – lays groundwork from expert musicians who are comfortable using improvisation as a form of abstract storytelling. The trio renders ethereal and chaotic-themed tunes against a backdrop of lively activity at a jazz club.

Among the album’s gems is “One Quiet Branch,” in which Hughes uses her effects-laden saxophone and conversational phrasing to weave fluent compositions within the wider sounds of the trio. While “Calling, Picking, Flying” highlights the trio’s ease of improvisation and percussive instrumentation across a nearly eight-minute performance, “A Little Sing Song” is lyrical, dreamlike and succinct, concluding after just two minutes. Live @ Jojo’s entices its listener to revisit and examine the mysterious dualities of nature through an ethereal, wild adventure. — Majeedah Johnson

Cinematic. Unrelenting. Brash. Tender. These are just a few terms that might help capture the majesty and mystique of the debut recording of cellist Janel Leppin’s Ensemble Volcanic Ash. The ensemble includes an all-star cast of area musicians: Brian Settles on tenor saxophone, Sarah Hughes on alto, Larry Ferguson on drums, Kim Sator on harp, Luke Stewart on bass and Anthony Pirog on guitar.

Listening to the album’s 11 tracks in one sitting feels like getting lost in an ever-changing dreamscape, surrounded by a midsummer night’s kaleidoscope of textures, colors, rhythms and emotions. Compositions can change mode and mood in an instant: the nine-minute expanse of “Woven Forest” starts in a roiling sea of drums, bass, guitar, cello and saxophone before transforming into a sharp, chamber music-meets-the Stooges sprint. That track reveals the deep influence that Alice Coltrane has throughout the record, with Leppin drawing particularly from Coltrane’s early-1970s work. Settles channels Joe Henderson on “Forest,” blowing a deep sound that could wake the dead; the group builds a delicate-yet-firm baroque monument on “A Palace for Alice,” balancing heavenly melodies with free-improv brash. Leppin’s genius is on full display here, with wonderfully penned compositions and masterful playing throughout. Her best moment might be her solo on the penultimate “Leaving The Woods,” which evolves from an enveloping dance of long and short, mid-range bowing to a haunting keen. It shakes the soul to its core, as truly great music can. — J.S.

An intricate balance shapes Luke Stewart’s music. The bassist prefers experimental frameworks where ensembles, forms and compositional-improvisational relationships abhor any template, functioning on their own terms. Yet he also pointedly centers a Black American musical aesthetic. Stewart’s work is often about striking that traditional/nontraditional balance. And never has he done so with the clarity of The Bottom, the debut of his Silt Trio. It’s music of startling beauty, profundity and humanity.

Melody is in no short supply, but here it becomes conflated with rhythm in a way that heightens both elements: Tenor saxophonist Brian Settles’ steplike tones on “Dream House” don’t work without Stewart and drummer Chad Taylor’s sure footing (and vice-versa). This also reinforces the music’s inherent Blackness; even the abstract “Angles” resounds with what Cannonball Adderley called “them dirty blues,” and with all the intellect and brilliance that pertain to the blues tradition. Like melody-as-rhythm, folk and art-world idioms are often interchangeable, as in the mind-tangling but grooving polyrhythms of “Roots.” Is The Bottom a culmination of what Stewart strives to achieve in his art? It’s tempting to say so … but for the love of God, we hope he won’t stop striving. — Michael J. West

The list above was compiled using a ranked-choice voting system by a panel of nine CB contributors and close observers of the D.C. jazz scene, all of whom voted by secret ballot: Kelsye Adams, Jeanette Berry, Jordannah Elizabeth, Majeedah Johnson, Allen Jones, Abram Mamet, Jamie Sandel, Jackson Sinnenberg and Michael J. West. The ranking is an exact reflection of the tallied vote. Each album in the “honorable mentions” category received at least one vote from at least one panelist. Considering the interconnectedness of the District’s jazz scene, where any panelist had a direct conflict of interest related to a particular album under consideration, that panelist recused themselves from voting on it and other panelists’ votes for that album were weighted up to account for the smaller voting pool.

Luke Stewart’s album received votes on eight out of the nine ballots, including three votes for No. 1. In the interest of utter transparency, none of those No. 1 votes came from current CapitalBop staff. 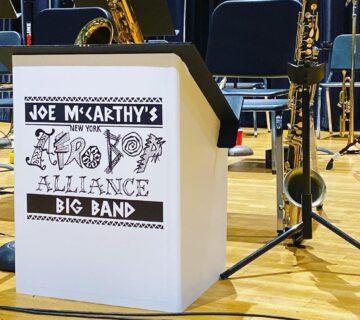