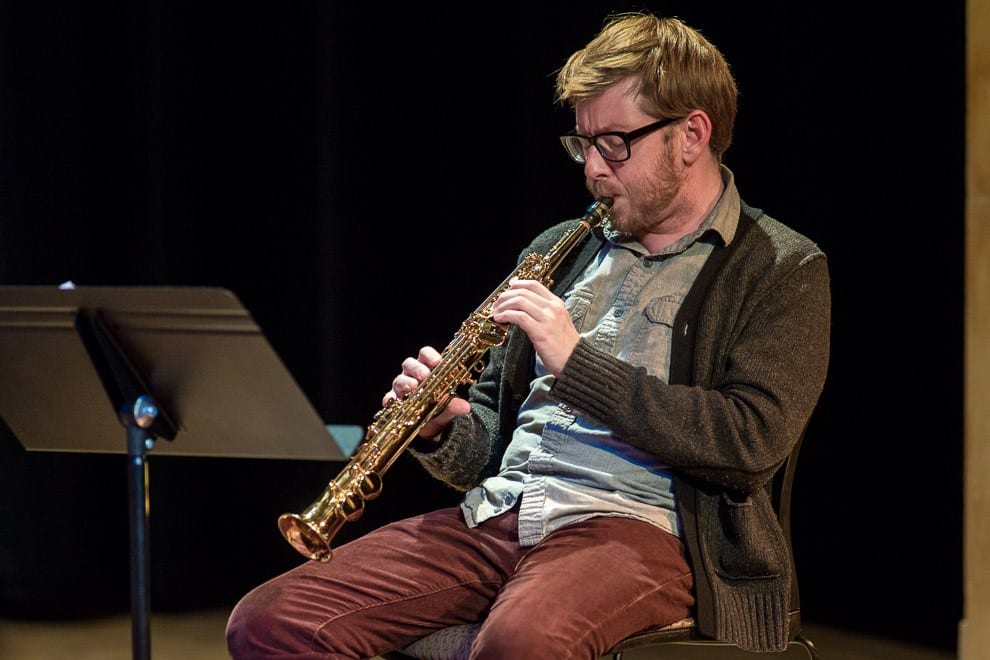 Brad Linde started this new year, as many of us do, with a resolution. “I decided in January,” he said, “that I was going to finish up all the projects I started over the last four years.”

This task is harder than it sounds. On top of teaching music at Georgetown Day School and co-leading the Bohemian Caverns Jazz Orchestra through a transient era, Linde found time to record material for 13 albums since 2014, seven of which he’s releasing this year under five different project names.

Since he first moved to the D.C. area to attend the University of Maryland in 2005, Linde, a saxophonist, he’s been involved in 32 distinct groups, by his count. Those include but are not limited to: Team Players, an avant-garde combo that performs music inspired by sports culture and is currently touring a new album, “FORE!”; DIX OUT, a cheeky quartet that mixes trad-jazz (as in, “Dixieland”) with free improvisation (“out” music); a Lennie Tristano tribute with saxophonist Ted Brown, one of Tristano’s former students; Roger Over and OUT, a group that reinterpreted the songs of country musician Roger Miller; and the Big Ol’ Ensemble, a big-band collaboration with Australian trumpeter-composer Elliott Hughes that released a new album and played the DC Jazz Festival this year.

The groups span a lot of ground, from straight-ahead jazz to work that borders on noise music. But Linde has a strong vision for each one, and an equally strong desire to create community — whether it’s just between the performers onstage, or between all in the room.

“That’s the common theme with all my projects I guess,” Linde said in a recent phone interview. “Some kind of organic, unfurling ideas of living in the moment with the musicians around me, and not practicing to play a certain way every time.”

Linde, who was born in Louisville, Ky., in 1979, grew up playing in middle and high school jazz bands, as well as in community bands in Elon, N.C. It was in these groups that he began to develop the community aspect of his artistic vision.

“I wanted to be a teacher, even before I was a musician,” Linde said. “I thought that was a noble career. And so I think music just found the outlet for that.”

“In high school I was mentoring younger musicians and I was playing in a community band at 15 where older musicians mentored me,” he continued. “Part of the reason I do all these projects, especially the big bands, is to create a sense of community and to connect people who come through town.”

Well into graduate school, first at the University of North Carolina and then at the University of Maryland, Linde developed his technical abilities in collegiate big bands and small combos, and also dug into his love for Duke Ellington, Charlie Parker and Lennie Tristano. In fact, a former Tristano student named Ed Paolantonio was a key early teacher for Linde. Like Tristano — an innovative pianist who helped pioneer free improvisation and himself taught dozens of private students — Paolantonio took a rigorous approach to improvisation, making his students sing solos by improvising masters like Charlie Christian.

“Only after you could sing them perfectly without any kind of backing could you put them on your instrument,” Linde said. “And then only after you play them can you write them down.” This method got at the idea of “how a great improviser tells a story,” Linde said. “What does the whole 64 bars feel like, instead of the hot eight-bar lick?”

Saxophonist Lee Konitz, a cool-jazz icon and another Tristano associate, would open the door to a broader approach to composition and improvisation. Linde met Konitz, an NEA Jazz Master, in 2007.

“Opening up to free improvisation, or oblique interpretations of standards, came when I met Lee Konitz,” Linde said. “’Creative music’ seemed more organic, more an extension of what Lee was doing with standards.” Linde specifically mentioned Konitz’s standards album Alone Together, recorded with Brad Mehldau and Charlie Haden. “[Konitz] has an expressive tone,” he said. “Everything sounds spontaneous; nothing sounds forced or prepared. I like that idea of discovering and not deciding.”

When pressed to describe what defines his sound, Linde points to an Ethan Iverson quotation about “informed canonical choices.”

“Because of my education and my background, I want my free playing to sound like songs, and I want my tunes to sound like free playing, whatever melodic quality or rhythmic quality,” Linde said. “I want a strong melody and a strong sense of rhythm; it can still feel good in terms of a ‘swing thing.’ I have to have some tether to the history of the music. … Whether it’s my deep study of Charlie Parker or Tristano or Duke Ellington — my love of that music — I can’t throw it out when I play free.”

“I feel Brad is someone who is hungry for information,” Aaron Quinn, a guitarist and frequent Linde collaborator, wrote to CapitalBop in an email. “He’s always reading, writing and investigating what it means to be an improvisatory composer/performer. Because of this, he is a person who will ‘take the wheel’ in order to make things happen and make his [musical] family happy if it’s something he wants to do. As a leader, it is difficult to make people happy all of the time. As a leader, he will try his hardest to make sure people know they are respected and their time is appreciated.”

‘I wanted to be a teacher, even before I was a musician…. And so I think music just found the outlet for that.’ —Brad Linde

The two major threads of Linde’s artistic vision, the communitarianism and the tradition-rooted free playing, came together after he was accepted to the 2013 Banff International Workshop in Jazz and Creative Music, a three-week intensive that places developing artists among both peers and mentors. That year, the faculty included luminaries like Nicole Mitchell, Wadada Leo Smith, Ambrose Akinmusire and Esperanza Spalding. But Banff also introduced Linde to many of his current collaborators from outside the D.C. orbit: pianist Erica Dohi, saxophonist Patrick Booth, percussionist Jonathan Taylor and trumpeter Elliott Hughes, among others.

Linde returned from Banff flooded with new musical ideas, and a strong desire to ensure the connections he made remained alive. He certainly made good on that effort: Many of the projects he’s wrapping up this year stem from recording sessions between 2014 and 2016, and feature collaborators he met at Banff.

He also wanted to bring some of those Banff connections to D.C. Many musicians he’d met there appeared with the BCJO in their weekly residency at the Caverns, giving orchestra members the chance to learn from a new colleague.

“We can play Basie and Ellington and Stan Kenton until we’re blue in the face,” Linde said. “But if we’re trying to be marketable or relevant or just enjoy the process of learning, [we should be] working with composers, getting their idea of why they do what they do.”

Saxophonist Billy Wolfe, a member of the BCJO and Team Players, said Linde’s will to both dream big and then follow through is what makes him such a valuable asset to the contemporary-jazz ecosystem. “I think what makes Brad stand out is his ability to conceptualize and breathe life into projects both small and large, that would otherwise go unrealized,” Wolfe wrote in an email.

“During our first Team Players tour in 2014, there was one car ride where the four of us were spitballing puns and/or kitschy ideas for band names,” Wolfe said. “Sure enough, Brad came up with several clever concepts and within the year, the bands came into being (even if only for a brief period of time). His ability to do what is necessary to make things happen is quite admirable.”

The next big event on Linde’s horizon is the Bohemian Caverns Jazz Orchestra 10-year anniversary in 2020. He knows he wants to do something special for that. He might also want to record one of his two Therapy Bands, groups in which the members all play their non-primary instruments. (He plays drums in one.) But lately, Linde has a different kind of concept in mind altogether.

“Maybe it’s time, instead of doing 32 projects over the course of 15 years, to focus on one and really go deeper with that,” he said. He’s talking about Team Players, with Wolfe, Quinn and Dickens — all of whom are available enough to regularly tour and record together.

“For the first time, I don’t have any burning desire” to embark on a new project, Linde said. “I think I’m just gonna let the dust settle on 10 years and 15 albums.” His tone suggested contentment, but then his voice quickly perked up. “But you know, there’s always a joke band title that needs to be created.”