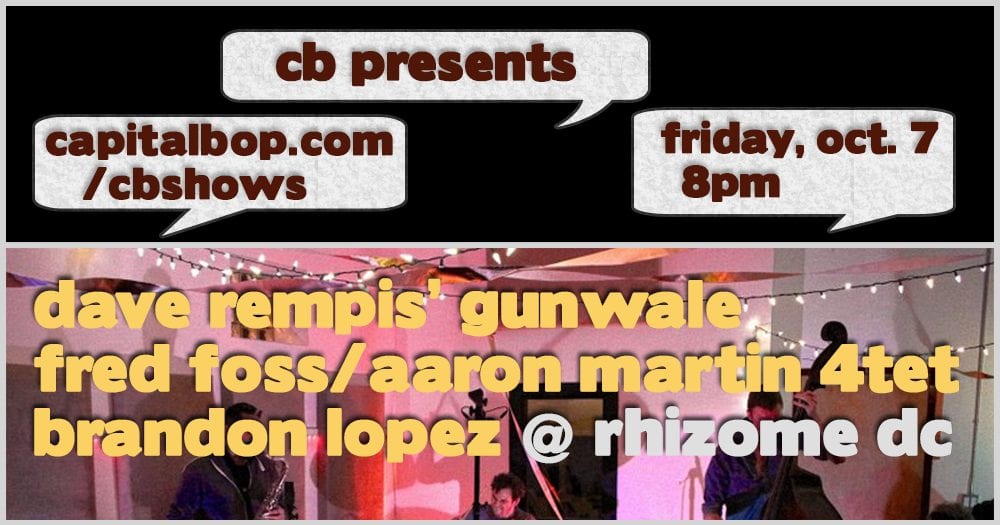 This Friday, CapitalBop is setting up shop at Rhizome DC, the city’s newest venue for experimental sounds. We’re thrilled to be bringing some of the best musicians we’ve presented all year to a community organizing space that’s dedicated to art, activism and community power.

The searing saxophone master Dave Rempis is coming all the way from Chicago with his trio, Gunwale. Fred Foss and Aaron Martin, two alto saxophonists and longtime D.C. luminaries, will debut their new quartet—a truly historic moment, as far as this city’s jazz scene is concerned. And Brandon Lopez, a Brooklyn bassist and rising star, has plenty of revelations up his sleeve.

Come join us at Rhizome DC, located at 6950 Maple St. NW, just steps from the Takoma Park Metro stop. Things will get started at 8 p.m., and we’ll be going at least until 11 p.m. Admission is just $10, and this is a BYOB event. See you Friday night!

Dave Rempis’ Gunwale matches the veteran Chicago saxophonist with two of the up-and-coming stars from the next generation of young Chicago improvisers, Albert Wildeman and Ryan Packard. For years Rempis has forged a singular path as a deeply dedicated saxophonist and organizer of concerts in Chicago, helped to shape the city’s identity as a thriving haven for experimental music. In addition to regularly releasing original, innovative music on his label Aerophonic, he has helped open and run Elastic Arts, an important venue for jazz and experimental music in Chicago. Dutch-born bassist Albert Wildeman moved to the Windy City in 2011 to participate in the scene that Rempis has helped to pioneer. Since then he has collaborated with a host of the city’s improvisers, and is making a name for himself as a strong voice on the instrument, steeped in the tradition of improvisation as experienced in the Netherlands and in Chicago. And Ryan Packard has become a fixture in Chicago’s classical music community as a percussionist and electronic musician, performing original music and in New Music ensembles. As a trio, Gunwale’s voice carries a unique shape, combining a love for full-on blasts of energy with a sensitivity to the smallest details, resulting in music that can be a freight train one moment, and an insectoid microcosm the next. The band released their first recording, Polynya, on Aerophonic Records in the summer of 2016.

CapitalBop is proud to feature the debut of the Fred Foss/Aaron Martin Quartet, the first time these two elder statesmen of the saxophone in D.C. come together on stage. These musicians come at improvisation from different angles, but have a lot in common: Both use music as a force for expanded consciousness, liberation and strength. Fred Foss has taught and mentored nearly every significant jazz saxophonist – and a handful of other instrumentalists – who has spent time in D.C. since the 1980s. In addition to performing with some of the icons in jazz, and developing a deep relationship with saxophonist Jackie McLean, Foss has led his own ensembles exploring the tradition of jazz, as well as presenting sophisticated original music. Fellow alto saxophonist Aaron Martin has for decades been a fixture of D.C.’s tiny, fledgling and fluxing free jazz community. Raised and steeped in the tradition of bebop, Aaron also had the experience of performing with Anthony Braxton and studying with Jimmy Lyons, two icons of avant-garde saxophone. An activist an organizer, Martin is determined to instill his music with the radical and revolutionary message that he developed through his experiences in the movements of the 1960s and ’70s. Together, Aaron Martin and Fred Foss will be on different sides of the same coin, the same tradition, heard together for the first time.

The young bassist Brandon Lopez is one of the most prominent figures in Brooklyn’s free jazz/free improvisation community, a stellar player and performer gaining traction and building a strong reputation as a virtuoso instrumentalist. His solo performances are the stuff of legend in the making, constantly pushing the boundaries of things-to-be-done on the upright bass. Coupled with a higher sense of stream-of-consciousness improvising, Lopez is building a body of performances that get better with every appearance. He will be releasing his debut solo bass album this fall.