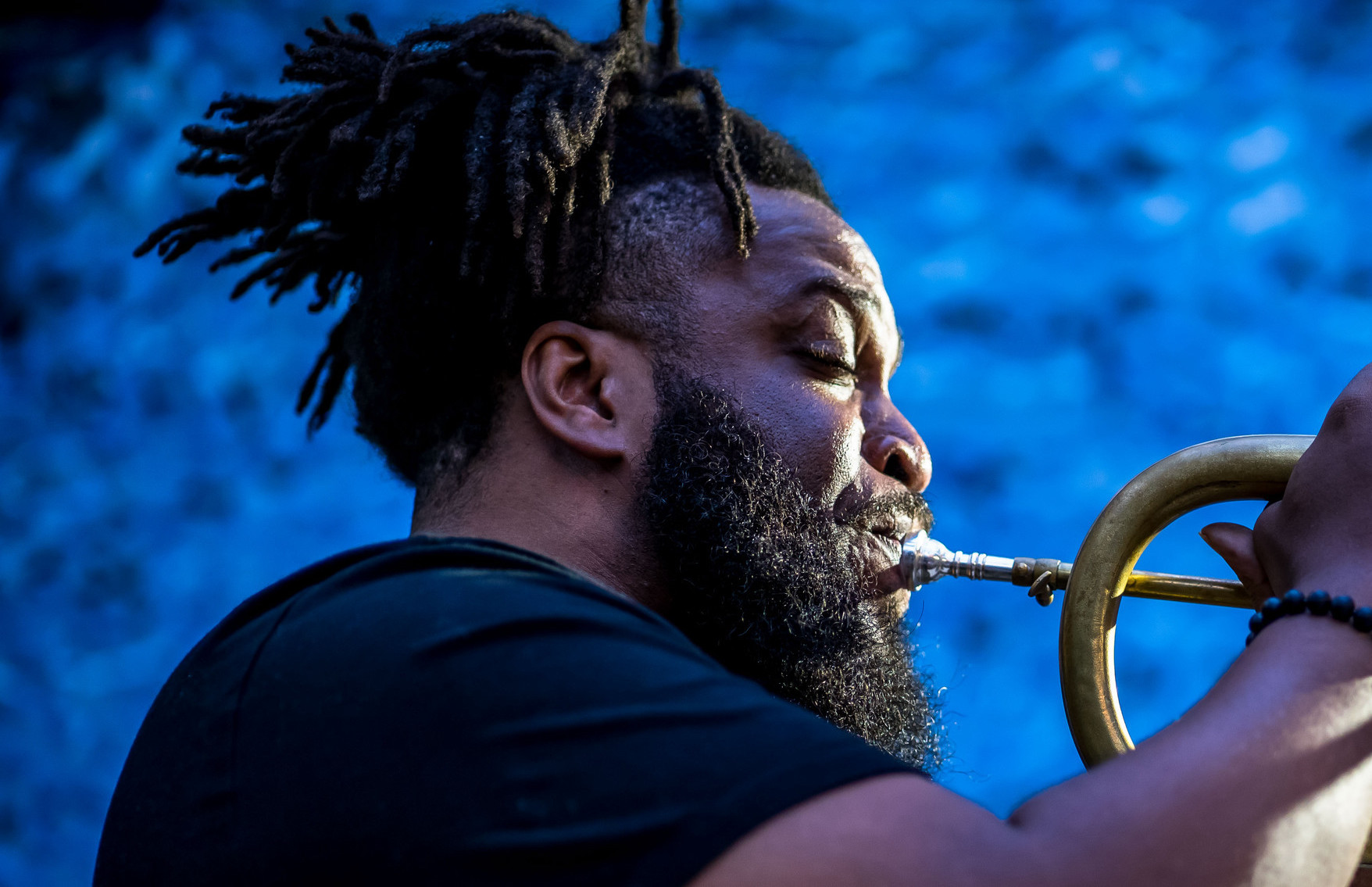 Clarence Ward III is a trumpeter, flugelhorn player and saxophonist whose star is on the rise. He recently released "Melanated Love," from a forthcoming EP. Courtesy Michio Ribeiro
Interviews

Multi-instrumentalist and composer Clarence Ward III has recently established himself as a staple of Baltimore jazz. His weekly jam sessions at R. House, near the Charles Village neighborhood, have ignited the scene and created a joyous environment for both attendees and the best jazz musicians in the city, young and old. His music, which he describes simply as “feel-good,” is not only melodically pleasing: Ward is beyond proficient — gifted, in fact — and he plays the trumpet, flugelhorn and saxophone with enthusiasm and seasoned sophistication.

For the past six years, Ward, 42, has been able to work full-time as a musician, and now performs several times a week in and around Baltimore, drawing on his past experience working with major players like Gladys Knight, Robert Glasper, Nancy Wilson and Benny Golson, among others.

His soon-to-be-released studio EP, Dat Feel Good, will be a departure from his live sound, offering listeners a different side of Ward as he reveals himself as a producer, engineer and arranger. We got a tantalizing taste of it earlier this month, when Ward released the EP’s lead single, “Melanated Love.” He is multifaceted and accomplished, and his consistent foothold in the Baltimore jazz community has manifested as an outlet not only for himself, but for everyone who comes into contact with his magnetic playing and approachable persona.

I sat down with Ward in Baltimore recently to discuss his career, his inspirations and the new music he has in store for us.

CapitalBop: Let’s talk about how you started working full-time, some of your biggest projects and who you’ve been able to work with.

Clarence Ward III: Well, full-time, realistically, [came] when I made more money playing music than I did at my regular job. That was probably around 2016. And I’ve been able to maintain for a while.

It’s been good. Especially being a Baltimore-based musician. Coming up, I was always told I had to have a fallback. And throughout life I always thought like that. But, in the end, music really became my fallback. When I was working in corporate America, I lost that job. I remember a week later I got a gig call for Lil’ Mo.

CW: Yup. And I played a few shows with her back then. And then while in rehearsal with her, I got a call to begin touring with Ledisi…. [I] toured with her for maybe about a year or two. If you don’t know her, you got to look her up — one of the greatest voices of this time.

CB: You didn’t feel pressure to go to New York?

CW: I’ve always felt pressure to go to New York.  I started playing at 15. At the time I had a girlfriend; she was from New York. Five months after I started playing, we went up for the holidays. I was hanging out with her family; her sister’s boyfriend’s name’s Ron Affif. He’s a guitar player who usually runs sessions at The Zinc Bar…. Her sister told him about me; he said I could come in and hang. And I hung out with him all night.

I saw so many killer musicians walk in — so many guys — [but they were] living in the subways. Some of the greatest musicians, at that time, that I had ever heard. I said, “I don’t want to live like that.” In my opinion, it showed no matter how good you are, that shit didn’t even matter in New York. That was my eye-opening experience, five months after I started playing. After that, I used to always want to go to LA. I always wanted to go hang in New York; I did that from time-to-time. But moving there?

I live in Baltimore — the cost of living is totally different.… I was like, “What? There’s no way I could move up here, paying all this money to have barely anything, and then completely struggle and hope somebody likes me? I didn’t want to do that.”

CB: Then it would become competitive.

CW: There’s nothing wrong with that.

CB: Competition in jazz: That never shook you?

CW: No. My background before music, I did martial arts and I played football. So I was always competitive.

One thing that I love about the music was I could express myself a lot more than I could in martial arts. I wasn’t able to fight every day. And in football … we had our games, but I went through life every day living in Baltimore. When I started playing music it was always a release for me.

Now, I miss the contact — to this day. I still miss hitting and getting hit sometimes. So when it comes to competition, I never had a problem with it. I look at it from the perspective [of] me coming up from a Baltimore City public school. That’s not a music magnet; I never got the attention. I’ve always had to play hard. Simple as that.

I’ve been grinding in Baltimore for 20 years. And over the last five years I’ve started to get a little more recognition. It’s cool, but in the end I’m just mainly about the music, about the people in my city.

CB: When you’re at R. House, and you see a large crowd having a great time, do you ever take it all in?

CW: Even at Terra Cafe, we had moments. But now much more so. I really enjoy it. It feels good for me to be in Baltimore and to see the love that goes around in whatever event I have. Because in Baltimore all they ever talk about is the negative aspects.

I perform a lot. The session is every Monday. People can talk about it every week because there’s something good that goes on every week. Outside of the high-level professionals that are there, the kids that come in — some of those kids have been hanging with us for the past five years. They’ve grown a lot simply from being there: playing with us; learning the aspects of the music — of different music, not just straight-ahead jazz. I mix in a bit of everything. And I always tell a lot of them, the reason why I work as much as I do is because I’m eclectic.

I’m a chameleon in the music. I’ve always listened to a lot of different music. Whatever you put me in, I’ll play within that style of music. Along with my style of playing, I’m going to play within-context to that music. A lot of people aren’t able to do that. For me that comes from growing up: I used to mimic people a lot, imitate folks. My aunt used to hate it.

CB: How do you feel about Roy Hargrove?

CB: Does he inspire your sound?

CW: Yup. Roy is the reason I decided to play trumpet and flugelhorn. I’m a saxophone player first. I started on flute, then alto and tenor [sax]. I played all woodwinds, minus some of the double-reeds. I remember I picked up the trumpet the first time around 17. But I was just noodling around with it. I really didn’t take trumpet serious until around 27. But I was always a Hargrove fan.

First album I heard of Hargrove’s was The Tokyo Sessions. Antonio Hart is on that album — that’s a Baltimore cat. When I first got to Dunbar [I was] put on alto saxophone. [The instructor] said, “Man, you got this ‘Cannonball’ sound.” I’m like, “What’s that?” So I went and looked him up and then [the instructor’s] son gave me the Roy Hargrove album. I went home and listened to them cats, and all I wanted to sound like then was Antonio Hart and Cannonball Adderly.

But I couldn’t get past the trumpet player, the way he felt when he was playing. Antonio Hart … sometimes when he played, he stretched out the music. It felt like it was authentic Baltimore playing. But when Roy did his thing, he emotionally felt different, on the other end. And I’m a Cancer, zodiac-wise — I can be an emotional cat at times. It just always stuck with me. Always. The thing that separates me musically is my sound, style and feel. And those are the things about him that I felt separated him from everybody.

A lot of cats can play. Another one of my influences is Nicholas Payton. Those cats are polar opposites. But for me it was always Roy.

CB: You mentioned the “authentic” Baltimore sound. Describe that within the jazz realm.

CW: Well, that’s the hard part to say sometimes. Over the years, myself and my comrades talk about it. Sometimes [there is] a point in solos where we stretch; it gets a bit rageful. And within that rage, to me, it’s the complete Baltimore experience. You get the good and the bad of whatever is supposed to be, emotionally. When you listen to some of these cats stretching, if you close your eyes, you feel like you might be walking down a dark alley amongst 10 guys waiting to rob you. That’s the stuff I see sometimes — it can get real aggressive.

CB: And, somehow, you’re able to stay true to melody.

CB: While I was listening to your single, “Melintated Love,” from your upcoming EP, Dat Feel Good,  I was thinking about your live sound versus your studio sound. On the studio album you’re able to use filters, synthesizers, certain things. Tell me the difference between your live and your studio processes.

CW: For me it’s a big difference, because the track that I sent you I’ve been working on for a long time. It’s been about a year. I play it from time to time. But I’ve just been building on it. Over the years I’ve done a lot of production, musically. People a lot of times see me as just a horn player. No — I do a lot of producing as well.

I have hundreds of tracks at home. I decided it’s time to start using some of these. And I made that track about a year ago — just been building on it.

CB: It seems like there are two different worlds — your live world is very organic. And then your production, studio world, seems very intentional. How do you keep those separate and which one do you prefer?

CW: Live is always best for me. Especially live in front of people. My live album, that was a live-feed show. And I enjoyed that. And during that time that was the best I [had sounded] in the previous four months. My father died at the beginning of Covid; I spent that next year and a half depressed, not really playing much, because I was emotionally messed up. But [the live recording] was one of the best moments I had all year. That was one of the best days I had. I said, “You know what? This needs to be my first album.”

CB: Tell me what you want the readers to know about the EP, and why they should listen. CW: For starters, it’s feel-good music. It’s music that in my opinion most people should be able to relate [to]. Music that’ll come out later they may not. But right now, this music that is coming out is more catered towards the people.  It’s going to be some nice, heartfelt music, I’d like to say.