The droplets of sweat congeal on my forehead. Nervous chuckles spill out with every uncomfortably spot-on observation. With Linnean precision and Dowdian snark, the column before me, written by Nate Chinen of JazzTimes, is characterizing, or perhaps rather caricaturing, a particular type of music fan — a new species, if you will. His subject is the “jazzbro,” what Chinen describes as “a self-styled jazz aficionado, overwhelmingly male and usually a musician in training himself, who expresses a handful of determinative social behaviors.”

First, am I jazz aficionado? Look above this column, which is published on a website devoted to jazz coverage, and you’ll see a pencil sketch of my face. So the answer is probably yes. I also possess a Y chromosome and pursue music in a more-than-a-hobby-but-less-than-a-career sort of way. Things aren’t looking good at first glance.

Maybe a saving grace lies among the “determinative social behaviors” that identify the jazzbro. First, let’s talk about how Chinen reports that surveyed specimens vocalize their appreciation in a live jazz setting. Apparently, the jazzbro’s distinctive call is an enthusiastic cry of “Wooooo!,” made at certain climactic moments during a performance. Overuse of the word “killing” is also a readily detected trait. In my defense, I tend to drop the “g” when I use “killing” in a jazz context, but I don’t think the jury would find that to be a persuasive argument. Sigh. Guilty as charged on both counts, your honor. 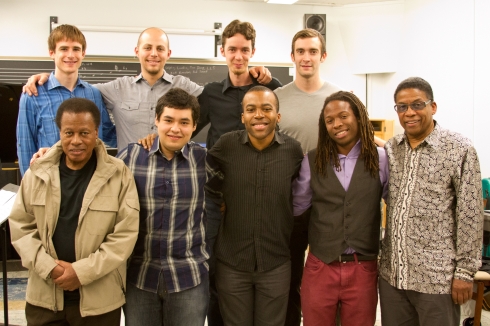 There are other behavioral traits that are associated with the jazzbro, of which complicated handshakes are one. My question for Chinen is whether my guy greeting of choice, the “bro hug,” falls into this rubric. Probably so, if for no other reason than reoccurrence of the term “bro” in the classification. Chinen says that other activities may include — but are apparently not limited to — drinking beer, attending parties, occasional social awkwardness and sometimes displaying elitist qualities. Check. Check. Check. And there are few things more bourgie than arts commentary or criticism, so check.

I continue to peruse the article, finding a couple lifelines to keep myself afloat among the ever-more-treacherous waves of bro-dom. Most promising is that I am a few years past Chinen’s key demographic of 18 to 34, which is the same rationale Chinen uses to grant himself a reprieve.

However, jazzbro is a state of mind, not a number, so my relief is short-lived. The mindset includes a feeling of general superiority, concurrent with a perceived marginalization from the mainstream. I challenge anyone to put two or more jazz-knowledgeable people in a conversation without both these sentiments rising to the surface. There is also a distinction drawn between the jazzbro and the jazz nerd, a term given short shrift in the article when it comes to appropriate descriptors. An earnest and inward-looking mental state is the key quality that puts the jazz nerd in a separate category. That’s not specific enough for me – I need more to feel certain that I’m not just another dude in brown flip flops (those seeking to learn more about the jazz nerd should make it a point to see this funny but biting video by Jason Marsalis).

But wait! According to Chinen’s research, in order to be a jazzbro, one must first be, well, a bro. To verify whether or not I’m a bro, we turn to the expertise of NPR’s Code Switch blog. The Bro-Map is a handy-dandy and downright ingenious tool that the writers developed to identify bros. There are four categories in the venn diagram of bro-ness: stonerish, dude-ish, preppy, and jocky. Maybe two of these categories apply to me – I’m emphasizing maybe here, people – though I’ll refrain from stating which ones. I even conducted a highly scientific survey on Facebook (response sample size: one) to corroborate my hypothesis. Conclusion: I’m not a bro and therefore, not a jazzbro. There it is, my friends. I’m free and this is my ticket home.

All that said, it absolutely does not matter if I or anyone else is labeled a jazzbro. Members of the jazz community are quick to navel-gaze, whine, and otherwise lament the lack of jazz listeners. Making fun of people that are paying good money to see live jazz because they don’t meet some arbitrary notion of coolness not only seems hypocritical, but also counterproductive. Plus, we’re not talking about dilettantes here. If the jazzbro is a student of music, there are few better classrooms than the jazz club. Even if we are talking about audiences who are merely curious, no law exists that says music should be limited to only Serious Listeners.

Chinen spends more than a few words talking about hipsters. Like bros, they are the butt of many jokes nowadays, yet this culture that came out of Brooklyn has produced some amazing indie sounds over the past decade. No one should discount the music because of a distaste for skinny jeans, facial hair or sleeve tattoos. During my high school years, I had no business wearing flannel, yet wear it I did. Authenticity was totally absent but that doesn’t change the fact that Pearl Jam’s Ten or Soundgarden’s Superunknown will be spinning on my mental jukebox for the rest of my years.

Even though Chinen was likely just being comical, there’s an undercurrent there that disturbs me. There’s no reason to be dismissive of people who simply enjoy music and show their affection for it. So jazzbros, unite! The next time I see you at a club, not only do you have my full permission to “Wooo!” to your heart’s content, but I will also join you in solidarity.