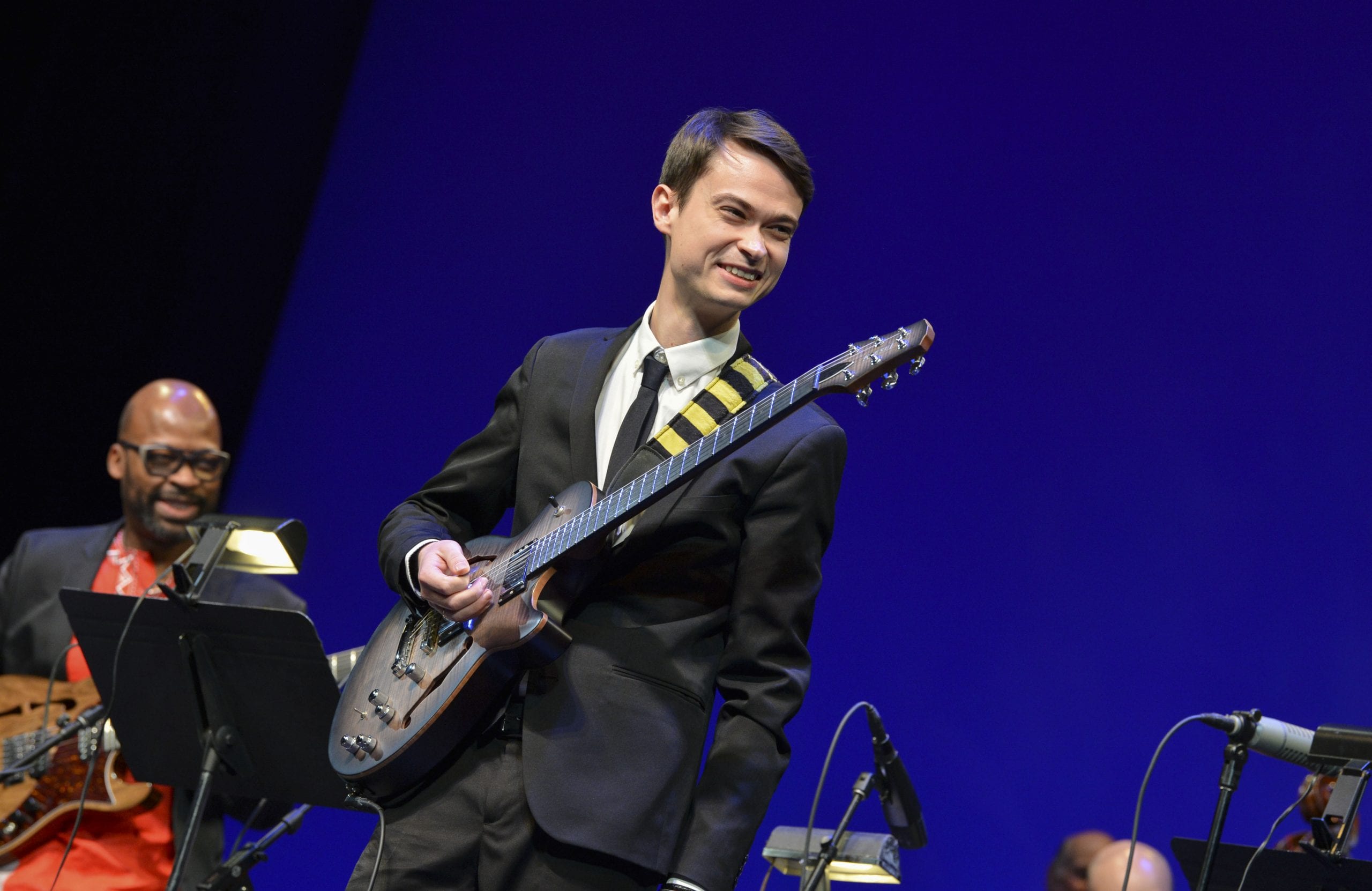 Russian guitarist Evgeny Pobozhiy performs during the 2019 Herbie Hancock Institute of Jazz International Guitar Competition at the Kennedy Center. As the winner, he takes home a $30,000 scholarship and a recording contract.
News

Guitarist Evgeny Pobozhiy, 30, was declared the winner of the 2019 Herbie Hancock International Jazz Competition on Tuesday at the Kennedy Center’s Eisenhower Theater.

He beat out two other finalists — hometown favorite Max Light of Bethesda, Md., who came in second, and Cecil Alexander of Muskegon, Mich. — as well as nine other competitors from the United States, Canada, Italy, Israel, France and Venezuela, who had participated in the semifinal round, held Monday at the Smithsonian’s National Museum of the American Indian.

The panel of judges for both rounds featured some of the top and guitarists in jazz: Pat Metheny, John Scofield, Lionel Loueke, Lee Ritenour, Russell Malone, Stanley Jordan and Chico Pinheiro.

“I’m so grateful to the panel of judges for their decision,” Pobozhiy said in a statement provided to CapitalBop. “Each one of them is a huge inspiration for me since my childhood.”

This is the first iteration of the competition using Hancock’s name, after the Thelonious Monk Institute of Jazz — and its namesake competition — were renamed late last year in honor of its longtime board chairman Herbie Hancock.

As winner, Pobozhiy will receive $30,000 in scholarship funds and a guaranteed recording contract with Concord Records.

On Tuesday, the three finalists performed two songs each with a small combo: one was played with a trio of pianist Reginald Thomas, bassist Yasushi Nakamura and drummer Carl Allen; another with that trio augmented by alto saxophonist Bobby Watson. While other finalists alternated between more uptempo, fast-paced showcase numbers and ballads, Pobozhiy stuck to mostly mid-to-uptempo for both of his two pieces: Jimmy Rowles’ “502 Blues,” made famous by Wayne Shorter on the Adam’s Apple album and bassist Steve Swallow’s “Falling Grace,” one of the many of the under-sung composer’s gems – showing off his restrained phrasing and highly animated stage presence.

He threw his whole body into the performance, gyrating and gesticulating with the same fury as his fingers flew across the fretboard, eliciting frequent applause from the crowd (he was the only finalist to do so mid-song).

The competition, which began as an annual piano showcase, has evolved over 32 years into its current incarnation, which is widely considered the most prestigious competition for rising jazz musicians and vocalists (the competition rotates its focus every year).

It is only open to musicians 30 and younger and its recent alumni are among the most prominent jazz musicians of today: Vocalists Jazzmeia Horn and Cecile McLorin Salvant, saxophonist Melissa Aldana, trumpeters Ambrose Akinmusire and Marquis Hill and bassist Ben Williams (Washington, D.C.’s own) are all recent winners.

The event on Tuesday doubled as the institute’s gala and all-star concert, showcasing a variety of tributes to both the institute’s educational programs and significant jazz anniversaries – such as NEA Jazz Master Dee Dee Bridgewater to the 50th anniversary of Louis Armstrong’s “What a Wonderful World” and beloved actor Keith David’s to the 20th anniversary of the passing of iconic singer big band singer Joe Williams. Other major performers included competition alumni like vocalists Jane Monheit and Gretchen Parlato. The house band featured musical director and drummer John Beasley alongside other established musicians like saxophonist Dayna Stephens; all graduates of the Institute’s postgraduate program.

Another focus of the event was to honor trumpeter and composer Terrence Blanchard, who received the Maria Fisher Founder’s Award from Hancock. The house band performed standout numbers from Blanchard’s catalog, including his arrangements of “On the Sunny Side of the Street” and “Detour Ahead,” as well as originals like “Ashé” and “Azania” — sometimes joined by guest vocalists such as Parlato, Lizz Wright and Cassandra Wilson,

The night concluded with a grand finale performance, in which the judges, Hancock, Blanchard, Beasley and Pobozhiy performed Wes Montgomery’s “Four on Six.” After taking the first solo, the newly crowned winner just stood on stage, listening to his heroes, rocking to the music, taking in every detail he could.