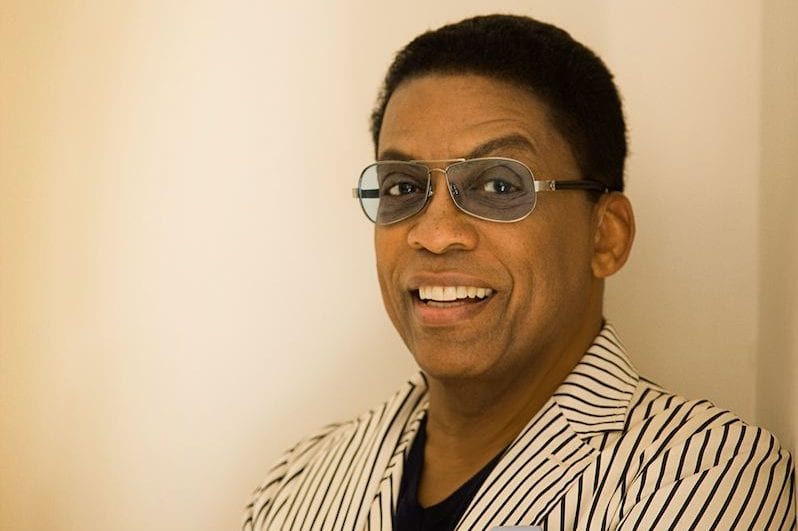 Herbie Hancock is always thinking about the future. As a keyboard player, he helped define the course of post-bop with Miles Davis’ 1960s quintet; with the Head Hunters, he took fusion to funkier and more international-minded territories. Then he thrust himself into the hip-hop and electronic-music movements with “Rockit,” a smash hit. Throughout his career, Hancock has sought radically new ways to make music, which often led him to help popularize technologies like vocoders in the jazz world.

But it’s not all tech all the time. As the longtime board chair of what’s now the Herbie Hancock Institute of Jazz (formerly known as the Thelonious Monk Institute), the 79-year-old keyboardist has also devoted energy to furthering and expanding jazz education for young musicians. As a goodwill ambassador for UNESCO, he pushed for the 2011 creation of International Jazz Day, an annual celebration bringing together improvising musicians from all over the world for workshops, classes and performances. It’s an expression of the unifying cultural values Hancock is increasingly focused on nowadays.

“We’re human beings,” Hancock told CapitalBop in a recent interview. “That alone should bring us together as a species — for our own survival and our own well-being, and the fact that we’re caretakers of the planet.”

He’s continuing his efforts to bring people together — and bring his to stay ahead of the creative curve while doing it — with a new tour, with star saxophonist Kamasi Washington in a co-headlining slot. It kicks off on Tuesday at Wolf Trap’s outdoor auditorium in Vienna, Va., and will continue across North America through Aug. 23. Then Hancock will continue on to Europe.

I caught up with him by phone a few weeks ago to talk about how two of jazz’s grandest figures came together for this string of shows, his soon-to-be-released album, and the gizmos and gadgets he’s been tinkering with lately.

CapitalBop: I was listening to the episode Jazz Night in America did on you three years ago, and I heard that you and Stevie Wonder used to have a friendly competition during the ’70s and ’80s over who would be the first to buy the latest gear. Do you still have that rivalry?

CB: I did want to ask about gadgets, however, because you’ve been noted throughout your career for bringing new technology into the music. What have you been experimenting with recently? What have you been playing with on tour or in-studio?

HH: I have Oculus Go, Oculus Rift and Oculus Quest — I just got Oculus Quest [virtual reality headsets]. They have nothing specifically to do with music, but it is tech stuff. The latest software I have is for mixing on the computer and it’s from a company called Valhalla. I’ve downloaded it but I haven’t actually put it in my audio workshops yet. Usually I use Logic but also, in my studio, we use Pro Tools and Ableton Live.

CB: What are you doing with Virtual Reality? Do you have ideas of what you want to or can do with it?

HH: Well, I’m constantly looking for new sounds and new sonic events and some other ways to implement them — sometimes easier ways. What I look for is having a significant amount of controls to be able to do, not necessarily the finely tweaked things — although they’re usually in there — I’m looking for broader strokes. I let the engineer do the fine tweaks.

CB: So, we’re talking because you’re about to kick-off a co-headlining tour with Kamasi Washington. How did this come about?

HH: Kamasi and I have been on a few different kinds of things over the past couple of years. Once we were interviewed together aboard a cruise ship, and we have performed opposite each other at the Hollywood Bowl. Kamasi actually sat in with me and did some tunes with my band at Walt Disney Concert Hall here in L.A., and he’s actually on the record I’m working on. So, one of the things I was thinking about is — and it’s kind of been spearheaded by things I’ve been seeing on the scene today with young musicians, especially here in L.A. — I see a lot of collaborations. They all have very close friends, and Robert Glasper, for example, he’s from Houston but spends a lot of time in L.A. He’s really great at being able to bring people together. It’s an attribute he has in his personality. People fall by his gigs; they’re waiting in the wings and in the dressing room and he throws them up onstage and he creates something in the moment for us to play. It’s very exciting to an audience and it shows the camaraderie that the musicians have! I think that’s a great thing to demonstrate, especially today because there are so many things that divide us: This is a way of bringing us together.

So, I thought: Kamasi is on tracks on my record, we have a great friendship now, he is one of the new stars on the jazz scene — and I’ve been around for decades! I thought it might be a nice package. I admire his great talent and his great vision and how he demonstrates it with his records and with his personality. Those were the kinds of things I was thinking about — and this idea of collaboration. Maybe there’s something we can do together, on the stage. I haven’t asked him yet but maybe I could sit in on something with his group and maybe he could sit in on something with my band.

CB: I’m glad you mentioned the album, because I’ve been following the news about it for some time. I know Terrace Martin is working with you, Kamasi’s been on it, Kendrick Lamar was in the studio. Can you talk about the record at all at this point? What it might sound like?

HH: First of all, let me clear something up. You’re right: Kendrick Lamar has come by the studio. We haven’t recorded him yet. I’m looking to find — he said he was interested, but we haven’t found the right material for him yet. We’ve got to see what we got. We got a lot of things in development and maybe in one of the things we already have there’ll be a place for him.

The way I’m looking at the material is that it’s all bits and pieces of ideas that come from either words or the input of the various people that I brought together to just create something. There are different people on different tracks. Like, Jacob Collier is on a couple things. And there are other people like Kendrick who’ve agreed to be on the record but we haven’t found the right material for them or we haven’t shaped it in the right way that we want to present to them. There are a lot of people on it so far. Snoop Dogg has done something already. Of course, Terrace is on there, Vinnie Colaiuta is on there, Lionel Loueke — you know, the people that are in my band. But we’re not a band on this record. We did record some things as a band, but I’m not sure if we’re using any of it or some parts or not, and that’s not really the focus of this record.

CB: In a Rolling Stone interview a couple years ago you talked about wanting to make records that bring people together — that point toward the commonalities between us as human beings. How does that manifest in the music? Is it just the act of bringing these people together, or something in the music itself?

HH: Every track sounds different: Each one could be on a completely different record.… Usually a record has a certain sound. I shouldn’t say “usually” because things have changed a lot. That is starting to break down now.

But what I decided to do, even in constructing each composition, was that it would be based off of moments and a modular approach, where I’ve recorded all these different kinds of moments and I’m putting them together like putting together a puzzle. Like: “This piece might sound interesting if it goes over here with this other piece. And maybe this one could come in for just a little part right after that, and then that goes to this fourth piece.” That in itself could be one tune and based off of all kinds of different ideas where things change, tempos change, moods change — just like life. We’re rarely just doing the same thing for any great length of time, except for sleeping. Even when we’re having dinner, we’re talking to our friends and we’re looking around. And even going to eat in a restaurant, there’s the part where you’re looking at the menu and seeing what you want to order. The references are life. And that’s what music really is about in the long run anyway, as it should be: the life that we all share in different ways.

CB: I also wanted to ask about the jazz institute that now bears your name. Now that the Monk Institute is the Herbie Hancock Institute, will you do anything different? Offer any new programs or courses?

HH: We’re expanding beyond just thinking about jazz from its musical aspect, but also from an ethical aspect. “What is jazz about,” you know? It’s about sharing, for one thing. It’s about courage, because it takes courage to create something in the next moment that’s not prepared by somebody else; you have to really create something in the moment. It’s about listening and, of course, that’s one of the most important things: Listening not just to yourself, but listening to others and responding or reacting in a way to make everything work out, to make everything fit, to actually elevate things. That’s the goal — building something together.

It looks like a daunting thing to do, but if we apply those lessons to life we can live a life that moves forward, a life that’s a constructive one. Those are the kind of things you actually get from playing jazz, if you can translate that into life, and, no matter who’s sitting in with you, you try to make everything fit. It’s non-judgmental — that’s the other thing. Being judgmental gets us in a lot of trouble. So, no matter what a person’s background is, no matter what country they’re from, what their race or religion is, playing jazz, the musicians don’t care. They just care about: “Can you play?” How are you going to work in a group setting? Those are the things the institute really wants to piggyback off of.

We also want to get more into technology because we’re living in an age of technology. So, we have a new program — well, a new project — called “Math, Science & Music”, and it’s something we’re developing from a lot of standpoints with a lot of collaborations with other educational institutes. We’re collaborating with universities: MIT, University of California, San Francisco State and Berklee. That’s one of the newer ideas. Basically, we’re going global. It’s always been a global organization but we’re spreading our wings: The kinds of collaborations we’re doing now are much more global in nature…. We’re adding things and expanding.