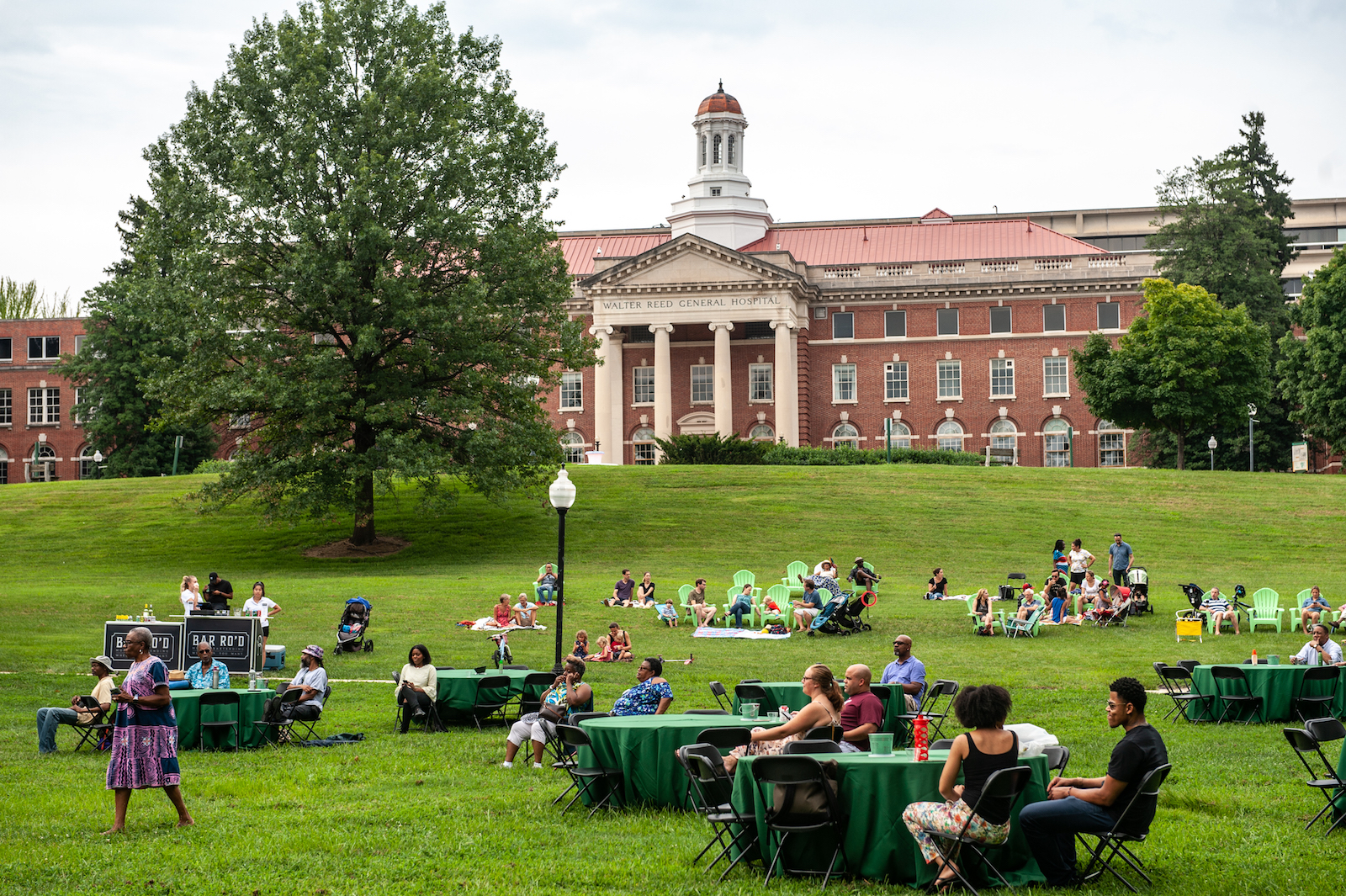 Washington D.C. has several outdoor — and totally free — music festivals happening this weekend. Jazz and world-music fans will want to pay attention to two in particular: HillFest and Down in the Reeds, which will each offer daylong live performances and family-friendly activities on Saturday. After a hiatus from festival gatherings due to COVID, HillFest and Down in the Reeds are another sign of the refreshing return to live music performances across D.C.

HillFest’s day of music, held across two stages at Garfield Park, in Capitol Hill, concludes the weeklong 2022 HillFest Conference, which has sought to serve jazz musicians in the D.C. metro area through workshops, jam sessions and discussion panels. Down in the Reeds, located at The Parks at Walter Reed, off Georgia Avenue NW, celebrates multi-genre performances from artists across the globe. Its live presentations will focus on the healing power of global music.

HillFest, produced by the Capitol Hill Jazz Foundation (CHJF), connects artists, administrators, and national government officials to honor the legacy of jazz music in Washington, D.C. — which remains an essential hub for jazz excellence. This year, Saturday’s performances will feature youth and tenured jazz artists from the area, including the Duke Ellington School of the Arts Jazz Orchestra, the Washington Jazz Arts Institute’s band, the Herm Hawkins Quartet and the Imani-Grace Cooper Quartet.

Esteemed jazz saxophonist Billy Harper will be the festival’s headliner. HillFest provides a unique opportunity to celebrate generations of jazz history while establishing its continued expansion. CHJF Executive Director and Founder Herb Scott, a saxophonist, discussed how the festival fits in with the foundation’s overall mission. “We’re trying to embrace the entire range of community — not just music community, but all folks who have kids that like live events, especially on Capitol Hill,” he said. “We want to use that geographic location to encourage elected officials to witness jazz and influence policy for jazz and all sorts of things.”

Down in the Reeds will feature a day of live outdoor music performances, dance and drum workshops, and community-centered activities, honoring the healing power of music in the D.C. Metro area. This year, the festival’s third annual celebration (2020 was an off-year) will feature intentional spaces created to honor diversity, inclusion and individuality. The daylong lineup features artists and musicians representing countries from across the globe, including Sunny Jain’s Red Baraat, the Medicine Singers with Yonatan Gat, Project Locrea, Vavá United School of Samba, FFC Morenada Bolivia USA, D.C.’s own Sound of the City, and vocalist-pianist Alison Crockett. Each year, this family-friendly festival expands its presentation of togetherness and innovation, reaching across more and more artistic disciplines.

This weekend, “we’ll play a lot of songs,” Nikol said. “There’s a lot of modern influence. We don’t try to be completely ‘authentic.’ These are songs from our countries. There’s an arrangement of Bulgarian, Chinese and Bolivian music. There’s also a version of ‘Take Five.’ Everyone has to be represented and [our music] is a mix of everything, but also modern genres.”

Chris Naoum, the co-founder of the Down in the Reeds festival, said that the festival had grown since 2019, when he first presented it. “It’s such a beautiful amphitheater in the original great lawn of the Army medical center,” he said. “The first festival was small, with one stage, and there were some workshops as well. Then the pandemic hit. In thinking about it last spring, we started working on it again and made the second fest happen in 2021.”

He added, “Down in the Reeds celebrates [how] the power of music can heal across communities and culture.” He is proud to be presenting a “set of artists from different cultures, backgrounds, and perform and speak on how their music encompasses that theme. We were able to bring in a couple of larger acts, including Red Baraat and the Medicine Singers with Yonatan Gat. One group is indigenous Native American Pow Wow drumming, and the other is a Brooklyn-based bhangra band. We pair that with world folk music, with Alison Crockett, R&B and soul, gogo, and Sound of the City.”

And the festival isn’t just about live music. “We have a ton of art,” Naoum said. “We expect people from all walks of life and ages to come out. There’s a lot of interactive arts and crafts for kids and families. There is a community mural. We’ll also have a historic scavenger hunt that people can do on their own and learn about the history of this space. There’s this music-art interaction installation, called Synesthesia Symposia, and artists will assign colors and shapes to different sounds and people will build their own art. We also have some environmental speeches and poetry performances. There’s an open jam, sound baths and a plant-music yoga session that’s starting off the day on the great lawn.”

To sum it up, Naoum said, “People can spend the whole day in exploration. You’ll be fed: mind, body and soul.”

Down in the Reeds performances and workshops will be held in a variety of settings on the Historic Walter Reed campus: the Main Stage on the Great Lawn, the Arts Plaza Stage and the Lucid Gathering Space.

More information about these free festivals can be found at the Hillfest website and the Down in the Reeds website.