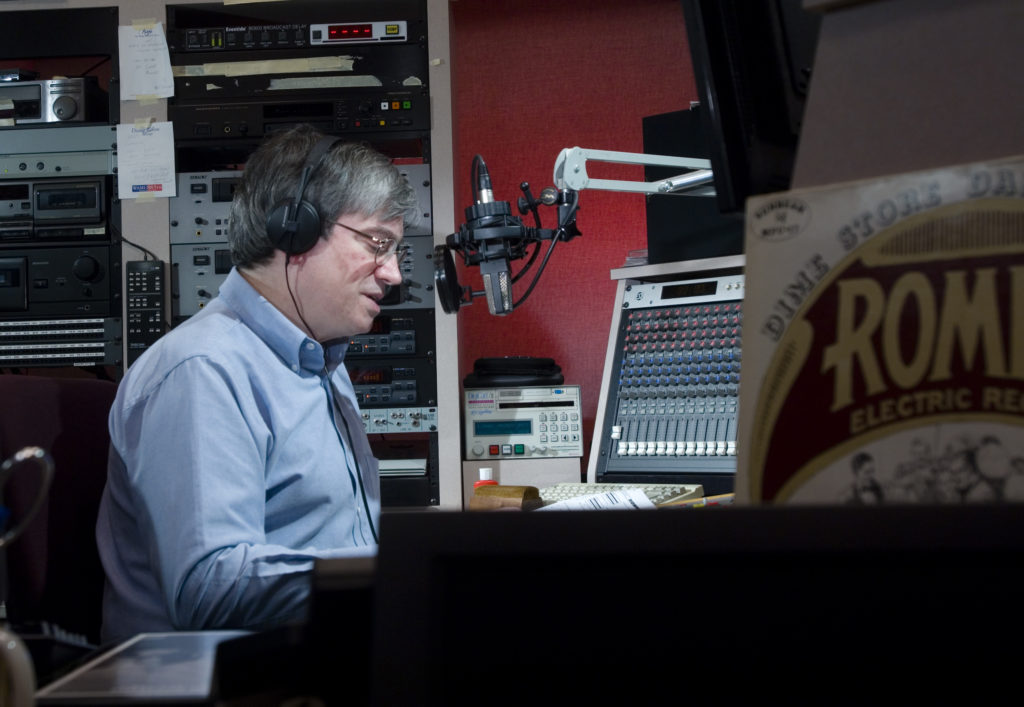 The coronavirus pandemic has crippled the jazz community in every outpost, and D.C. is no exception. Venues have permanently closed; some musicians have moved away, while those who have stayed are hard-pressed to find work. If audiences haven’t undergone quite the same level of turmoil, they’ve nonetheless been deprived of a great source of joy, while watching the devastation with alarm and sadness.

But in this hard time, the D.C. jazz world has seen one genuine rebirth, all the more welcome for its uniqueness. Hot Jazz Saturday Night, WAMU 88.5 FM’s long-running program of classic pre-World War II jazz, relaunched on Sept. 19 after a two-year absence from Washington airwaves.

Rob Bamberger, the show’s creator and host since 1980, kicked off the re-launch appropriately: with the Erskine Tate Vendome Orchestra’s raucous 1926 record “Stomp Off! Let’s Go,” featuring Louis Armstrong. “It has been a little while, but it’s good to be back,” Bamberger said after the song had ended. “I’ve missed us.”

Beloved by jazz fans in the DMV, Hot Jazz Saturday Night was canceled by WAMU, D.C.’s NPR affiliate, in June 2018 after more than 37 years on the air. At the time, the station was executing a pivot away from music programming, following a nationwide trend in public radio. “We appreciate that Hot Jazz Saturday Night has a devoted audience,” said Andi McDaniel, then WAMU’s chief content officer, in a 2018 interview. “But it’s a niche audience, and it’s not an audience that is growing. We want to grow our audience, and our research says that a news and talk format is the way to do that.”

An online petition hoping to save the show garnered nearly 10,000 signatures, but the die had been cast.

Though the show was well known around D.C., and had tended to meet its goals during WAMU’s pledge drives, Hot Jazz Saturday Night was first and foremost a labor of love. Bamberger often sounded casual (if thoughtful) and relaxed in his on-air presentation, but the content of the three-hour program is always carefully worked out, whether exploring a theme or just ripping through tunes. Each vintage Fletcher Henderson, Bennie Moten or Frank Trumbauer side was carefully placed for maximum context and effect.

“Hot Jazz Saturday Night isn’t a records show,” Bamberger explained. “It is a curated show, a program that embodies public radio’s mission and values to inform, contextualize and to entertain.”

It was also an avocation for Bamberger. By day, he was an energy policy specialist at the Congressional Research Service until his 2010 retirement; since 2013, he’s been a part-time social worker, and that was the work he threw himself into after what he supposed was his final broadcast on June 23, 2018. He also enjoyed having more time to spend with his wife, Chris.

One might think that once it was no longer an obligation, Bamberger might enjoy the music even more. (He did a few special broadcasts on Takoma Park’s low-power WOWD-FM, though not on a regular basis.) Without the show, though, his passion seemed to fade. “I found myself listening to music less,” he said. “I wasn’t spending as much time in the basement of our house where all the music is. And sometimes, I’d just sit down there in total quiet, looking around at the music, the books and periodicals and files and wondering … what meaning the collection still held.”

Meanwhile, Bamberger’s fans never stopped expressing their displeasure with the cancellation, or their hope that the show could be revived. In 2020, a series of events finally made that revival possible.

First came the pandemic, turning everyone in the world into a shut-in; suddenly there was a captive radio audience on Saturday nights. Then in June, Live From Here, the centerpiece of WAMU’s Saturday night programming, was canceled by American Public Media. Shortly thereafter, McDaniel departed WAMU. Combined with the steady stream of listener feedback, these circumstances became welcoming to a fresh perspective.

“We know that while our listeners value news coverage about the election and the pandemic, they also appreciate being able to have a respite from the news,” said Monna Kashfi, who stepped into the role of chief content officer. “What better way to do that than with the return of a signature, locally produced arts program like Hot Jazz Saturday Night?”

Offered a two-year commitment, Bamberger accepted. He returned to WAMU with a new time slot — 7 to 10 p.m., an hour earlier than before — but otherwise kept the show the same as it had always been. “Enough in our lives and psyche has been under assault and shifting,” Bamberger said. “You know how we sometimes talk with such pleasure about a friend whom we’ve not seen in a long time, but with whom we picked up as if we had been with them only yesterday? … I hoped that the show would project exactly that.”

And it has. His months back on WAMU this fall and winter have made it seem as if he’d never been gone. Despite its long absence, Hot Jazz Saturday Night feels like something that can be counted on, at a time when nearly everything else feels unstable and treacherous.

For the old-school jazz aficionados, it’s also the return of an embarrassment of riches. Since September, Bamberger has broadcast several themed shows, including one on the recordings of New Orleans trumpeter Henry “Red” Allen and a spectacular one on the eightieth anniversary of Duke Ellington’s legendary 1940 Fargo concert. When there’s no theme, Hot Jazz Saturday Night is still a potent reminder of jazz’s deep history, and of how vital the music is. Bamberger is always there with a scholarly tidbit or two, noting that a song wasn’t a commercial recording but a radio transcription, or that the drummer clowning with Louis Armstrong at the top of a 1930 record was Lionel Hampton.

All else notwithstanding, Hot Jazz Saturday Night simply serves as proof that we, in jazz and the world at large, are still resilient in the face of a public health crisis and political chaos. “If a touch of the hot jazz life can keep you grounded and sorted out, please come back next week,” Bamberger said on his first night back on the air. “And every Saturday at 7, when we’ll make it a hot jazz Saturday night.”