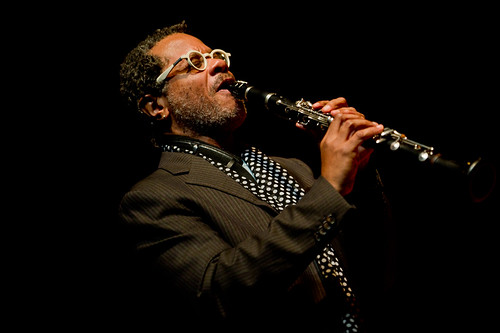 The clarinetist and saxophonist Don Byron is a leading member of a generation of jazz musicians who began living and working in New York City in the 1980s and early ’90s. This group of performers came up well-schooled in both collegiate institutions and the bands and jam sessions of the scene — where they learned from the music’s mid-century masters, many of whom were still around and active.

For Byron, his unique perspective and interest in the music allowed him the opportunity to learn a wide array of musical approaches. Throughout his career, he has paid tribute to musics ranging from klezmer to reggae, exploring the traditions while fueling his own creative concept. His latest project is the New Gospel Quintet, which explores the African-American religious and spiritual tradition as developed and made popular by Thomas Dorsey.

We in the D.C. area were unfortunately unable to catch a full performance from this dynamic quintet, since a thunderstorm cut short his set at the Rosslyn Jazz Festival. On Sunday, he will bring a different band — his quartet — to Bohemian Caverns. I caught up with Don Byron this week to discuss the New Gospel Quintet and the quartet that he will bring tomorrow.

CapitalBop: The New Gospel Quartet is your latest musical exploration. What sparked this interest?

Don Byron: I’ve been looking at my own religious issues and I like the music that was attached to that. I really started getting into Black religious stuff — checking out preachers originally, not so much musicians. Once I could see the connection between that kind of ministry and the music, I became much more interested in the music. I’ve seen a lot of great artists and studied them. I felt like Thomas Dorsey and Sister Rosetta Tharpe were great subjects because a lot of American music comes out of that. Rock ‘n’ roll comes out of that, and all of the forms of gospel that we have really come out of Thomas Dorsey’s work. I got interested in it and wanted to play some of the music with my friends.

CB: Did you grow up in the church?

DB: I grew up in the church, but not that kind of church. My grandfather was a bishop in the African Orthodox Church, which didn’t have that kind of music. And I was raised Lutheran, which also didn’t have that kind of music. I think the kind of religion that we take for granted now as being kind of normal Black religious stuff — I think similar to the ways that people had class issues with the blues, I think even my own mom had class issues with what she called “Holy Roller” churches. She really sought out a more kind of anglicized sort of worship for us. My interest in this kind of flavor of religious worship I came into on my own.

CB: With the New Gospel Quintet, who is this group for?

DB: Instrumental gospel music tends to be more on the smooth jazz side. And there’s nothing wrong with smooth jazz, because really what smooth jazz people are playing is what R&B vocalists are singing…. Bebop is not what an R&B vocalist or a gospel influenced vocalist [plays], that’s not the material that they’re improvising with. So we’re improvising with those materials, but not with a smooth jazz mindset. I think a lot of different people can comment on what we’ve done from a lot of different angles. If somebody’s really deep into adventurous improvisation, there’s that in it. If they’re into a disciplined bebop thing, there’s that in there. If they’re into gospel music beforehand, they will recognize this material and the feeling around it, but some of the techniques that we use are not coming from the smooth jazz R&B pallette. It’s bringing some different ways of doing things together.

CB: For Bohemian Caverns, which creative concept will you bring?

DB: Aside from all the things that I do that are conceptual, I have music of my own that I play in quartet style, and that’s what I’ll be bringing. We have a nice group, with Aruan Ortiz on piano, Cameron Brown on bass and Tony Jefferson on drums. We’ll be playing my music and other things I like to play. I’ve played in D.C. before, but never at Bohemian Caverns. I’m very excited to play there.

Don Byron performs at Bohemian Caverns on Sunday as part of Transparent Productions’ “Sundays at 7 at the Caverns” series. Tickets cost $15 in advance and $20 at the door, and they can be purchased here. More information is available here.