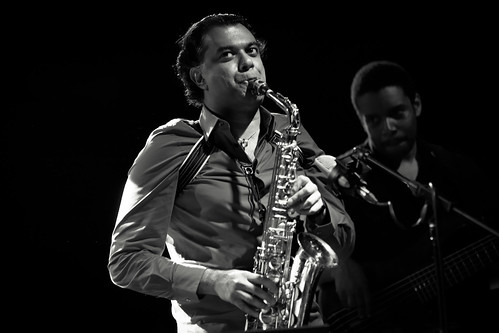 In the 1950s and ’60s, Miles Davis and John Coltrane began to intersperse elements of Indian classical music into their composing and improvisation; Kind of Blue, possibly the most beloved jazz record of all time, can really be thought of as a collection of distinctly American ragas, for the way it lingers on certain scales or “modes” for long stretches — sometimes entire songs. A few years later, Coltrane was employing melodic and rhythmic concepts from south Indian, or Carnatic, music while speeding down the fast track that landed him in the position of free-jazz pioneer.

In the past five years, a new crop of musicians — this time, most of them with South Asian roots — has pronounced its strong and embedded interest in bringing Indian classical together with 21st-century jazz. The music they are creating is more directly tied to the sounds of the Indian subcontinent than was that of the ’60s experimenters; look to Vijay Iyer, Rez Abbasi and Dan Weiss for examples of such globalization-era brew.

But especially, take stock of the bitingly alert alto saxophonist Rudresh Mahanthappa. Mahanthappa, who was first inspired to bring Indian classical music into his jazz playing after hearing a Kadri Gopalnath record during college, makes some of the current day’s most bracing and exciting music. A true modernist, Mahanthappa often uses electric bass and electronic effects to add texture and immediacy to his music. He will lead a combo at Blues Alley this Thursday and Friday, and he answered a few questions via email in anticipation of those shows.

CapitalBop: What in particular struck you upon first hearing Saxophone Indian Style, by Kadri Gopalnath? And then, during your apprenticeship with him, what did he teach you that hadn’t already come through on the record?

Rudresh Mahanthappa: I had already heard about Kadri Gopalnath before hearing Saxophone Indian Style. In fact, I has taken a trip to India with the Berklee All-Stars and tried to search him out to no avail. The important issue with that album was that I was able to hear Indian Classical music on the saxophone. Up to that point, I had been trying to emulate string players and vocalists, which proved very difficult on my instrument. Hearing Kadri opened a door for me, as I could follow what he doing by ear and even attempt to imitate in much the same way I had been with Coltrane, Bird [Charlie Parker], etc.

Apprenticeship might be a bit too strong of a word. For Kinsmen, we actually conceived music together. With regard to Samdhi, I went over to his house every day for almost a month and picked his brain about various ragas and the melodic ornamentation (gamaka) therein. I really want to grasp the main underlying concepts of both in a real technical way at a root level, the dos and don’ts, the whys and why nots, etc. I also wanted to learn how he was doing some of these things on the saxophone. In playing a closed-hole instrument, he has developed some truly extraordinary techniques!

CB: One can tell when it’s an invented conceit that has inspired an artist to fuse two concepts, rather than a natural and inevitable compulsion. In the case of your music, the way you bring together jazz and Carnatic music feels like it stems from the latter ­– it’s something altogether unforced, and logical. Where do you find points of convergence between these two improvisation-based musics? 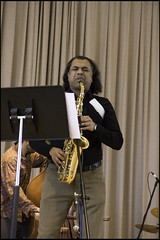 RM: Well, it’s important to realize that the core of my journey stems not only from musical interest but more from defining and describing my hybrid identity as an Indian-American. It’s always been important for me to treat both Indian music and jazz with the utmost integrity as selling either short would be equivalent to selling my soul cheaply. To me, the importance of rhythm is a major common factor. When I hear Jack DeJohnette, I hear Trichy Sankaran, when I hear Zakir Hussain, I hear Max Roach.

Though the melodic approaches are different, the emphasis on beautiful “song-making” and personal expression are another place where these art forms cross.

CB: Much is always made, appropriately, of your interest in Carnatic music, but who are some American jazz saxophonists that have particularly influenced you? For me, it seems clear that Steve Coleman and Bunky Green had large impacts on your playing; feel free to talk about them, or about others I’ve missed.

RM: Ahh, yes. I wish more people asked me that as I always consider myself a jazz musician through and through. Charlie Parker is obviously a huge one for me. When I first heard the Savoy Recording in elementary school, there was no going back. After that, it was mainly tenor players. My approach to the alto is actually quite tenor-istic, if you will. A lot of Coltrane, all periods. The original Impressions album is still one that I go back to when I’m feeling uninspired. The recording of Johnny Griffin playing “Cherokee” taught me how to articulate and feel faster tempos. Von Freeman was vital when I lived in Chicago in the mid-90s. Gary Bartz is always amazing. Just saw him the other night with McCoy [Tyner] and he sounded fabulous. Obviously, Bunky and the M-Base guys (Coleman, [Greg] Osby, Gary Thomas) were all an inspiration.

CB: Your albums and live performances up to this point have been very well received in the jazz world. What does the future hold?

RM: I’m really hoping to do more performing in general. I tour a lot in Europe but not as much as I wish to in America. I’m trying to change that. I’d also like to do more as a sideman. I’ve been blessed to play in bands led by Jack DeJohnette and Danilo Perez in recent years and would like to further explore how my sound/approach fits into someone else’s musical vision.

I have recently resurrected my original quartet with François Moutin and Dan Weiss but have swapped piano for David Fiuczynski on electric double-neck guitar. There are things that David can do melodically that no one else can do so the music I’ve composed for this ensemble sort of centers around that. We’ve only done three or four shows but look for this band to be more active in 2013.

I’m also looking to branch out as a composer and create work for other groups/genres as well collaborate on interdisciplinary projects such as music for dance and theater.

Rudresh Mahanthappa performs with a combo at Blues Alley this Thursday and Friday, with sets at 8 and 10 p.m. both nights. More info is available here and here, and tickets can be purchased here.