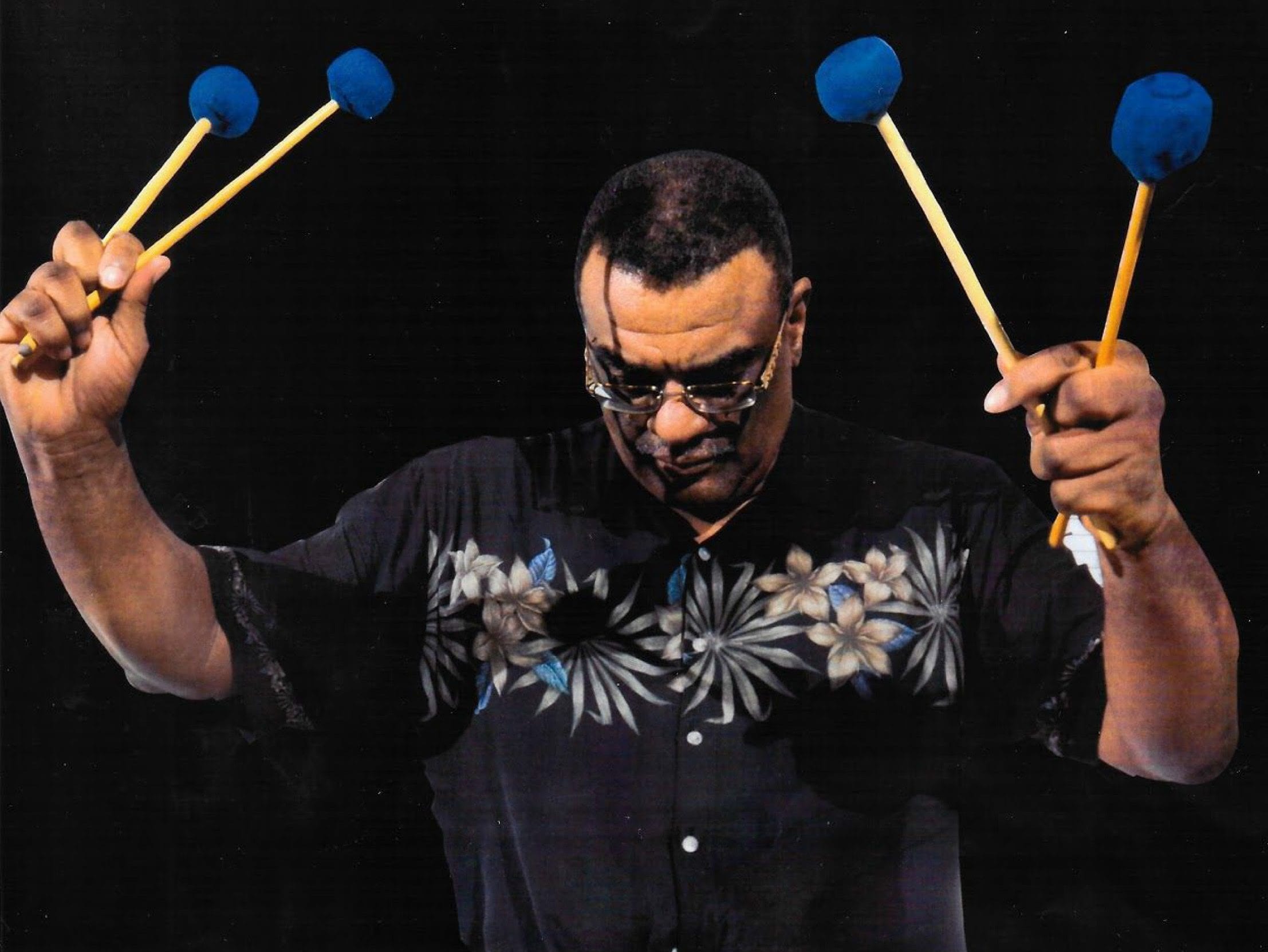 During the 1960s, a select group of masters helped redefine the traditions and artistic standards contained within the genre of jazz. Musicians like Freddie Hubbard, Donald Byrd, Wayne Shorter, Eric Dolphy, Andrew Hill and Bobby Hutcherson released dozens of momentous recordings that combined rhythms and instruments from Africa and Latin America with a new style and vigor, experimenting with free improvisation along the way.

Among that list of musicians is the drummer Joe Chambers, mallet percussionist and composer who appeared as a sideman on many pivotal Blue Note Records albums from the era — some by the names listed above. Before that, as an student of music composition and theory at American University, Chambers was a rising star on the Washington, D.C. scene. He played with the JFK Quintet, a group that featured the esteemed area saxophonist Andrew White, and was in residence at Bohemian Caverns during its bop-era heyday, when the club was a destination for out-of-town greats like Miles Davis and John Coltrane. After relocating to New York City, Chambers contributed to some of the most remarkable jazz LPs of all time, starting with Freddie Hubbard’s Breaking Point in 1964.

Even then, Chambers was writing original music — Breaking Point features his tune “Mirrors” — and would later make a number of albums as a bandleader that showed off his own expansive compositional vision. But before any of those records, in 1970 he joined the charter class of M’Boom, a percussion ensemble founded by Max Roach. The group featured a wide array of instruments from across musical traditions, including marimba, timbale and timpani; following Roach’s death in 2007, Chambers and fellow original members Ray Mantilla and Warren Smith have kept the troupe alive.

This Friday, Joe Chambers will lead a version of M’Boom in concert at the Kennedy Center, performing in a hybrid ensemble with the D.C.-based version of his Moving Pictures Orchestra (directed by Brad Linde). Earlier this week, after a guest lecture at the University of the District of Columbia, Chambers — who taught for years at the college level — sat down to talk about his upcoming performance, his friendship with Max Roach and his start in D.C. This interview has been edited for length and clarity.

CapitalBop: Washington, D.C. holds a special place for you in getting a start in jazz and even more. You have a lot of roots here with school, studying at American and also working at Bohemian Caverns. Can you share more on that?

Joe Chambers: I was studying but also, I had worked at The Caverns for three years, six nights a week with the JFK Quintet. That was with Andrew White (saxophone), Ray Codrington (trumpet), Walter Booker (bass) and Harry Killgo (piano). Performing was the main focus. The studying was good. But doing that, I met all these people. In those days, there were 2-3 other clubs, including Howard. At one time, jazz was very prominent — those days, Howard was bringing in jazz shows too … Miles, Trane, and Cannonball.

Eric Dolphy was the one who took the song “Mirrors,” and he was introducing me to the Blue Note people. I didn’t know, I just showed up and brought the music. Freddie Hubbard liked the tune and he recorded it. From that point on, they were calling me for the dates. And that’s what it was.

CB: After Breaking Point, you started working with other musicians on multiple projects. People talk about how distinctive the Blue Note sound is. Can you speak on some of the characteristics that rendered a series of such memorable recorded sessions?

CB: During your guest lecture, one of the students asked how you were able to play in many different styles during back-to-back sessions. You talked about how you just play the music and you allow it to have its own identity. Can you go further into how you master that?

CB: You were one of the few percussionists [recording for] Blue Note who was composing music at the time.

JC: I was always interested in composing and arranging. I had an older brother, he’s dead now, and he was a serious classical composer. And from that time, I always have been in orchestral music from the time I was little. I studied composition and came here. Yes, that contributed greatly. When I went and did all those sessions, they wouldn’t give me a drum part. I didn’t want a drum part; they would give me the piano part. So then, I’d thoroughly learn the song, through and through. I was playing the drums but I was reading the piano music. In big band, you can have a trumpet part and all the hits and things will be right on the trumpet part.

CB: Another point in the lecture was that when composing, you’re mostly focusing from the piano. That’s where you write from. Can you share more about your process?

JC: There’s different ways to compose depending on the medium. But a lot of the music that we’re gonna play was written from the piano first. You structure the piano and harmonic patterns and the melody. It starts there for most, for me. Every good musician can play some piano in our society. All musicians play in varying degrees a level of piano. I may be able to play a little more. It helps you tremendously.

CB: Max Roach started M’Boom in 1970 with a handful of expert percussionists. As one of the founding members, can you talk about the inspirations that went into Max assembling the group and its musical goals at the time?

JC: The term M’Boom or Bwoom, comes from the mythology of the people of Kuba. That region is now the Democratic Republic of Congo, and can also be found in areas of eastern Nigeria. The deity of M’Boom is symbolized by royal masks, known as M’Boom, or Bwoom masks. That’s what he [Max Roach] titled the group.

As far as percussion troupes, there’s a long history of that. As far as stateside in the U.S., there used to be something called Rise and Fly. Rise and Fly is comprised of four-to-five notable drummers and a backup band. The format of their performance was: Each drummer would play singularly with the band and then get together with a finale at the end. Rise and Fly goes way back — I would imagine to the very beginning of jazz ensembles. In 1970, when he called on me to join his percussionists, I thought that format was what we’d establish.

Instead, Max wanted to explore percussion. Percussion instruments have the widest range of timbre compared to any other family of instruments. Once the group M’Boom formed, we took a whole year out, from 1970-1971, just learning how to play. We had to learn how to play the mallet instruments, timpani, conga drums and hand drums. That led me into the direction of being a mallet player. All of these spaces [further] open up music and other areas for you within your music and presentation.

CB: In a number of your interviews, you talk about the mentorship and camaraderie that you had with Max Roach. Can you speak further on the impact that Max Roach had and still has on your life and artistry?

JC: I always tried to be like Max Roach. If you’re an aspiring percussion player, Max is the model to follow. Study him. He did stuff with symphony orchestras, choirs, string quartets and a lot of work in the theater. That’s what I mean by that. I’m still trying to be like him. In business, he was very savvy within the music industry. And he wrote music too. There weren’t any drummers writing.

CB: In the version of M’Boom that’s performing this Friday, can you touch on some of the elements that you’re keeping consistent with its original compositions? Is there going to be an expansion or departure from those earlier performances?

JC: We have M’Boom percussionists arriving from New York to perform.  We’ll also have a D.C.-based orchestra and a vocalist [Mavis Swan Poole]. The compositions were expanded to include the performing orchestra and vocalist.

CB: With this multi-faceted project and the vastness of your career — including educator, composer, pianist and xylophonist — where do you see your artistry moving to next?

JC: More recording and writing is on the horizon. M’Boom is anticipating more performances, hopefully in Europe as well.