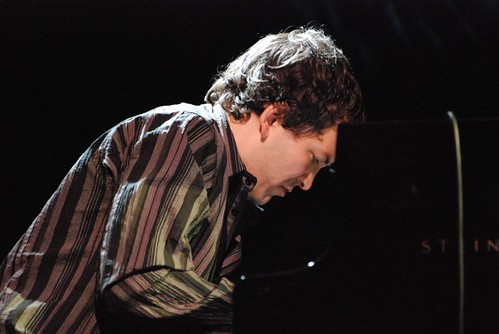 Well, where to begin? Brad Mehldau gave an amazing solo performance in the Coolidge Auditorium at the Library of Congress last Tuesday, Mar. 1.

I really wasn’t prepared for such virtuosity, since I hadn’t seen him
previously and readily admit I’m lukewarm about most of his releases.

But that evening, the capacity crowd witnessed complete mastery of the piano, combined with a sublime finesse. Brad’s extraordinary command extended beyond technique (something he has in spades) to tone, coloration, timing, rhythm, feel and inventiveness. He was clearly channeling the spirit, each tune becoming a vehicle for boundless explorations of great emotional depth.

I never thought I would ever want to hear anyone play Nirvana’s “Smells Like Teen Spirit” (which he later identified as “an American folk song by Kurt Cobain“), but in Mehldau’s hands it became one. He carried the tune from a beautiful yet driving exploration of the theme through realms of imaginative improvisation and back.

While some songs brimmed with strength and built to crescendos, with the entire range of the piano blended into what seemed a single tone, Mehldau also displayed a beautifully subtle touch on the ballads, which dripped with tender feeling.

His take on Massive Attack’s “Teardrop” began so ravishingly that it could indeed bring teardrops. Then came a voyage into improvisations that had a darker tonal center and carefully scattered dissonances that probed the outer reaches of the theme before resolving arrestingly right back into that gorgeous presentation of the melody.

His take on “My Favorite Things”, which I have forever associated almost exclusively with Master John Coltrane, demonstrated that there is indeed another way to play this tune. It was a way that borrowed nothing and probed much new creative space.

Though his takes on others’ songs were perhaps where I found the pianist’s singular approach to sound and melody making themselves most easily evident, he also played a number of tasty originals. Relative to his other work with which I’m familiar, these seemed to receive a particularly intense and passionate treatment.

As he intimated, there was no set list. Mehldau played what he felt as it came to him — to the point that he had some difficulty remembering which tunes he had started from when sporadically trying to clue in the crowd. While that approach to performing might invite a musician to wander, it was triumphal in his hands. The crowd seemed to agree, and despite what is usually a relatively short time slot for programs at this venue, Mehldau returned for three encores before a voracious crowd.

Mehldau clearly has a rare gift for developing emotional centers within “standards,” and also the acumen to recognize that the concept behind playing standards (probing the popular song of the day) doesn’t belong in a museum, with content drawn only from the Broadway showtunes of a few generations ago. He makes whole new entities of modern pop songs.

Though he made light of his “extemporizing” in his remarks, that facility was a key to the complete success of this evening. I’m rarely excited by solo piano, and even less frequently feel anything from anyone with as substantial a level of commercial acclaim as Mehldau, but there were undeniable stretches of pure transcendence within this gem. Any performance that attains that level rates an A-plus.