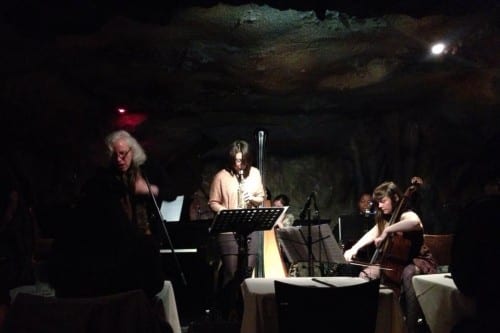 Sunday evenings at Bohemian Caverns can often seem like a prayer meeting. Bobby Hill – director of Transparent Productions, the organization that has presented avant-garde music at the club on various Sundays since 2011 – graces the stage much like a deacon delivering church news, warming up the congregation for the sermon. The dark, subterranean air shimmers with anticipation. On Sunday, the tension was particularly heightened for Janel Leppin. This was the first time the Washington Women in Jazz Festival has collaborated with Transparent Productions. And it was the first time Leppin, an experimental cellist and one-half of the duo Janel & Anthony, has led a group at Bohemian Caverns. Transparent’s series there has brought some of the most cerebral and soulful artists, who simultaneously strive to push musical boundaries. Leppin fits directly within that framework of bold originality.

This performance marked only one more chapter in the unfolding body of work we have come to expect from Leppin, one of the hardest working creative musicians in D.C. Her compositional and technical prowess have been tested and proven through years of collaboration and study with masters. In addition to her critically acclaimed duo with Anthony Pirog, she has toured with Kyp Malone of TV on the Radio, collaborated extensively with Baltimore pedal steel guitarist Susan Alcorn, and studied Indian and Persian classical music with leading practitioners of those traditions. (Full disclosure: She has also performed on occasion with Laughing Man, a rock band of which I am a member.) She is also a member of Stylus, a record-player ensemble. All of her influences and experiences add up to make her one of the most unique young cellists in music today.

Her Ensemble Volcanic Ash, which debuted on Sunday, is a quintet featuring bassoonist Amy Fraser, saxophonist Sarah Hughes, harpist Jacqueline Pollauf, and vocalist/pianist Lisa Sokolov. Leppin led as a cellist and vocalist, and also brought an array of electronic pedals and a Califone portable record player. The group’s name came from an experience when she was on tour in Europe: When the Icelandic volcano erupted in 2010, infamously grounding more than 100,000 airline flights, Janel was one of those caught in the disruption. Rather than catastrophic explosions and molten lava, the major issue associated with the eruption was the ash. “I was fascinated that the world was forced to stand still for an indefinite amount of time,” she said in an interview. “This beautiful, ethereal substance, tiny shards of volcanic glass, was creating total chaos in our modern world, which seems to dominate and control nature in every way conceivable.”

Among this talented chamber ensemble, Leppin’s star shined the brightest on Sunday. At the start of each set, she played two solo pieces – one on cello, another on electronics. It was especially interesting to be in the room for these presentations; the audience listened intently while Leppin displayed her mastery of extended cello technique, and later to the grace and poise of her electronic manipulations. Whether she is playing harmonics, pizzicato and arco simultaneously, or arranging her electronic creations, Leppin is always precise and never clumsy. This was the kind of music that is rarely, if ever, heard in the fabled Caverns.

Her opening piece for cello began with the simple plucking of a moving bass line, which she looped. She then bowed the melody, adding delay and reverb to achieve an iconic cello tone like what’s often heard in epic films depicting various heroes of the ancient world. Where this piece showed Leppin to be a dedicated student of the Romantic period of orchestral music, her second showed her as an inspired electronic experimenter. “This goes to the people trying to stop us.” That is how Leppin introduced the solo electronics piece, titled “One of These Days.”

As its harsh reversed loops and swirling effects filled the club, the audience knew at once that this was something different. While some swayed with the off-kilter rhythm, others simply stared in fascination. Leppin’s Björk-indebted vocals likewise swirled with the effects as she masterfully manipulated her words, blending the track and overdubbing vocals into an organic display of electronic wizardry. At its essence, this is a protest song, the lyrics calling out those who are complicit in corporate hegemony and greed. Her passion showed as she nearly screamed the chorus, all while keeping a finger and a toe on a pedal or knob. It is a song representative of one of Leppin’s goals as a musician: to keep alive the political commentary in the D.C. art and music community, which is disappointingly lacking in this approach overall. Whispers and side statements peppered the thunderous applause at the end of the song, the sounds of an audience digesting what it has heard. A clip of the cellist and activist Pablo Casals speaking accompanied the entry of the rest of the ensemble, blessing the young leader by implication as a powerful voice in politically aware musicians.

With its unique instrumentation, Ensemble Volcanic Ash’s sound morphed throughout the concert. Many times Jacqueline Pollauf’s harp took on the role of a pianist, outlining chords and harmonies as the bassoon supported it. The cello, voice and saxophone would often state the melody. Everyone had a chance to improvise. The ways in which the instruments in the compositions moved were reminiscent of a string quartet with piano. The compositions were familiarly classical, but with jazz-like structure, full of exchanges between the melody section and solos. The sound of the ensemble was at once soothing and challenging, easy on the ears yet maybe strange to the average listener. One of the servers working that night, Kalimba, said it best: This was “ahhh-vant garde” at its finest.

Sarah Hughes’ developed classical tone on the alto saxophone appropriately complemented the ensemble’s sound. A true student of the Tristano school, her solos were light and impressionistic and full of harmonic complexity. Pollauf played her role masterfully as she outlined the harmonies of the compositions, her tone blending beautifully with the group. Amy Fraser’s virtuosity on the bassoon was undeniable, rich in tone and precise in execution. Likewise, her staunch classical training was exemplified during one of her solos, when she referenced Stravinsky’s “Rite of Spring.”

Overall, the material was quite varied compositionally. On one tune, Leppin drew upon Pollauf’s harp to pay tribute to Alice Coltrane, another one of her influences. She also arranged a song originally written for Janel & Anthony for the ensemble, and performed an arrangement of a suite that Alcorn had written as a dedication to her. Leppin wrote the suite’s libretto in Spanish, to honor women in music.

Naturally, improvisation was a large part of the performance. A gut-wrenching wail or spitfire babble from Lisa Sokolov would be complemented beautifully by Hughes’ expressive noodling. The members’ sense of pitch was nearly perfect as they improvised. Leppin’s high-pitched tremolo on cello would complement Pollauf’s lush plucking. There were moments of intense group improvisation between the entire ensemble.

And the concert ended with the most interesting group improvisation of the night. Leppin began playing records on her Califone, in improvisational fashion. She would quickly skip between tracks and records, looping certain passages and manipulating their signals electronically. She even referenced Miles Davis in a loop captured from Sketches of Spain. The ensemble then joined in collectively, improvising over the loop as Leppin continued to toy with the electronics before she too joined in on cello. At the end, the audience once again applauded in deep appreciation. It was something they had never heard, especially in a place like Bohemian Caverns. But in a sense, it was just another way of upholding the venue’s vanguard tradition.

In its third year, the Washington Women in Jazz Festival proved its willingness with this show to look outside of the rich jazz community and reach out to the area’s broader community of improvisers. Though Leppin is a student of jazz, she does not fully identify herself in that manner. She has used influences from the avant-garde jazz and free-improvisation tradition to chart a course that reaches past their confines. And as a female instrumentalist, Leppin is a rarity; in a region that fosters such varied and original creativity, the fact that there have emerged so few female musicians of prominence or recognition reflects the continued patriarchal practices within the improvised music community, and society at large. The powerful music performed by Ensemble Volcanic Ash was a reminder of how talent is blind. If there was any imposed sense of novelty in the all-female new music ensemble, it quickly faded away in the depth and beauty of the music. In the end, all that was left was a profound statement of meaningful music by a group of dedicated and passionate musicians.