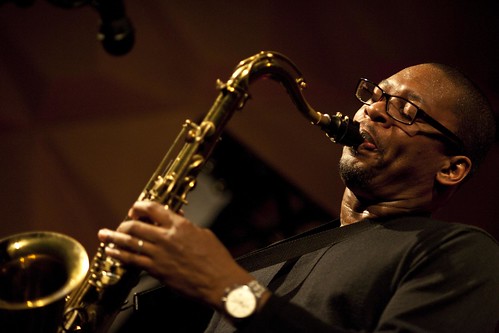 Ravi Coltrane, shown in a separate performance, brought an adventuresome intellect to his concert at the Sixth & I Synagogue. Courtesy Thundershead

Ravi Coltrane began his Saturday night onstage at the Sixth & I Synagogue with a saxophone soliloquy, meditating with easy but hunkered-down comfort on a five-note pattern. He transposed it up a step, then brought it back down to grapple with it further. Eventually, once the rest of Coltrane’s quartet thundered in, it would become clear that this passage was lifted from the Bob Dorough tune, “Nothing Like You.”

Dorough is the quirky, country-salesman-sounding singer and composer behind Schoolhouse Rock, and for some almost inconceivable reason, Miles Davis collaborated with him on a few tunes in the 1960s. One of those was “Nothing Like You,” a silly, brief ditty thrown onto the end of Davis’ Sorcerer album; it found Dorough singing star-struck lyrics in his weakly twang over the smoky, post-cool backing of Davis’ band.

But on Saturday, as Coltrane ruminated on one piece of that melody, his introspection gave the once-comical tune a new cerebral life, and kept metamorphosing. It was like quietly obsessing over a thought, until you notice that it’s developing more complex dimensions every time you ponder it. Then the band piled in to tackle the full tune, and drummer E.J. Strickland played games with the hi-hat so fiercely that every time he dropped back into a consistent pulse on the two-and-four beats, the resultant swing feel seemed to burst out and soar off the ground.

It was this mixture of spiritual inquiry and heady, careening post-bop that would define the night. But other than those underlying elements – and the genuine cheer that the tenor saxophonist exuded from the front of the bandstand – little stayed constant during the performance.

Coltrane guided his group through a caffeinated and frenzied, polyrhythmic take on the Thelonious Monk and Kenny Clarke classic “Epistrophy;” but then the quartet turned things down to a simmer for an extended coda, building a furtive groove to a near-climax before trailing off. Coltrane declared his independence from all those ever-tempting references to his musical lineage, improvising in fits and jabs that recalled Branford Marsalis and Joe Henderson more than his father, John Coltrane; then, three songs in, Coltrane lavished his original “Prelude” with the sheets-of-sound arpeggios and Eastern-influenced improvising that are his father’s most obvious legacies. And in the greatest anti-coup of all, he closed the show with “Giant Steps,” the John Coltrane classic.

The Sixth & I Synagogue, in the heart of bustling Gallery Place, is a striking place to hear music. Its deep blue hues, stately menorahs at each side of the reader’s platform-cum-stage and looming balcony make it an “inspiring” space to play music, as Coltrane said on Saturday. It’s not engineered for music, and at the sides of the room especially the echoes of the often-dissonant music could be a bit challenging, but the overall experience held a gravity not common in your typical concert-hall jazz show.

Coltrane was backed by his longtime band of Strickland, pianist Luis Perdomo and bassist Drew Gress. The quartet’s years of playing together shone through on the modal “Midsummer,” a Coltrane original, when the saxophonist and Gress glided effortlessly through unison lines. And on “Jagadishwar” (written by Coltrane’s mother, pianist Alice Coltrane), when Perdomo’s deft hints at the melody complemented Coltrane’s impassioned and literal declarations.

Ultimately, Coltrane proved himself to be the inheritor of marvelous genes, but not at all because he simply emulated his father. Instead, he demonstrated an arresting ability to define his own, powerful way forward while engaging his collaborators. That is what John Coltrane did in the 1960s, and Ravi Coltrane is doing it today in a completely fresh style.