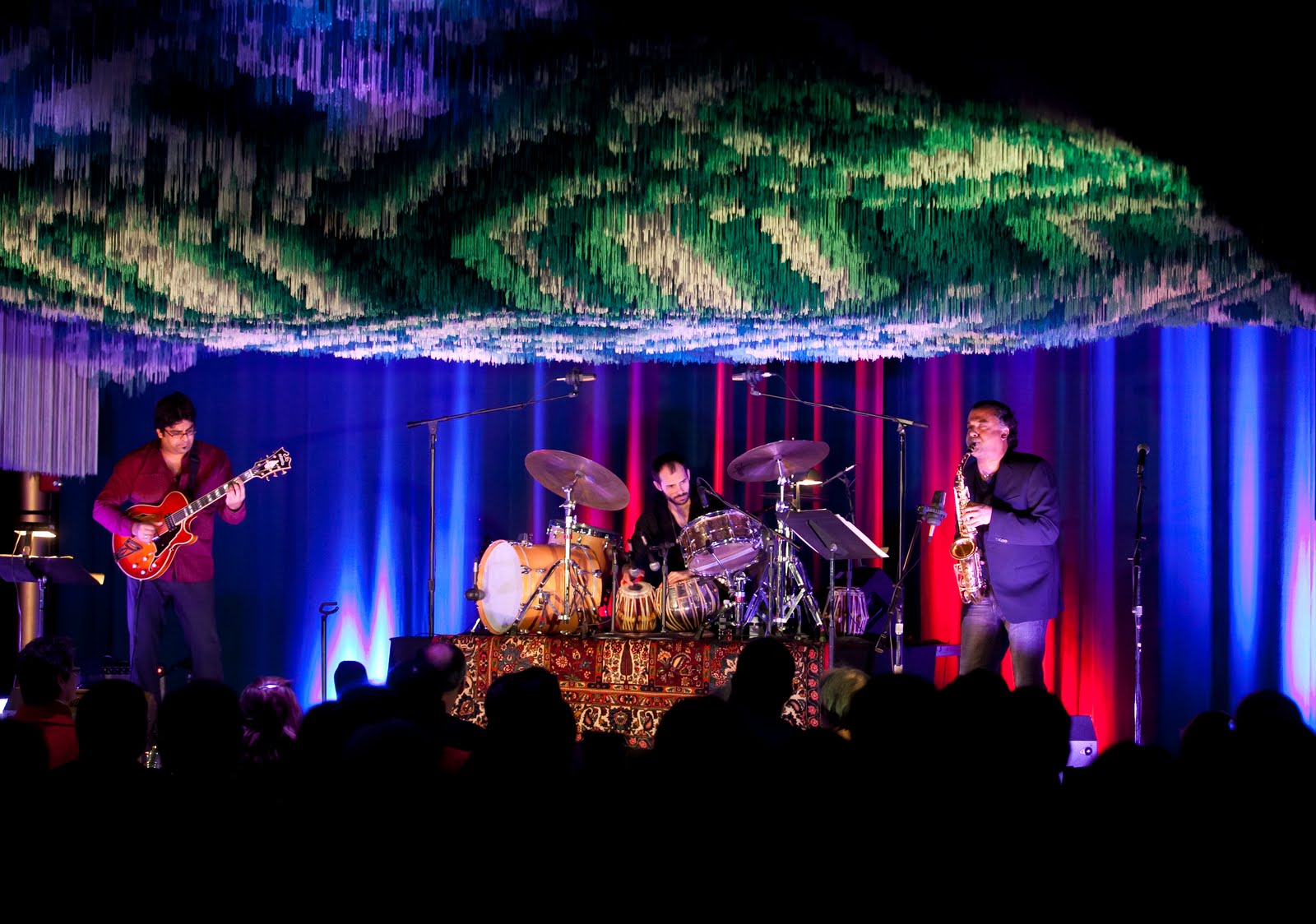 The digital age is turning out to be a time when we’ve got a scary amount of options, and much less ability to stay put. It’s always been a requirement for visionary music to dig into its roots without rehashing them. But nowadays the average musician’s palette of references – and his strategies for mixing and messing them up – has exploded. So if the Indo-Pak Coalition’s fire and emotional power are at first surprising, the vastness of its ambition and stylistic meld is not.

Still, hardly anyone else is doing what they’re doing. And it’s safe to say nobody does it better.

Led by Rudresh Mahanthappa, an alto saxophonist of robust and clarion tone, the trio features guitarist Rez Abbasi and percussionist Dan Weiss. At the Kennedy Center’s KC Jazz Club on Friday, it was rare for all three not to be playing at the same time.

In this way, the small-group collective improvising that’s been a vital part of modern jazz since the 1960s comprises one of this trio’s foundational reference points. The other, quite clearly, is the classical music of the Indian subcontinent. The Indo-Pak Coalition’s songs are often divided into something close to talas – Indian classical’s rhythmic structures, more complex and compartmentalized than the Western system of measures used in jazz. Mahanthappa and Abbasi take extended solos, often nesting in single ragas – or modes of a scale. And at least half the time, Dan Weiss ditches his drum kit in favor of the tabla, a hand drum used in Hindustani music with a sound that bubbles and bursts.

Perhaps the fundamental difference between bebop and Indian classical is that one is founded on constant harmonic readjustments; the challenge is to maintain a narrative (“tell your story,” as Lester Young put it) while improvising on perpetually shifting scales. In Indian classical, which also prizes improvisation, pieces are typically based on a single scale; from there, the musician crafts a sort of linear drone. 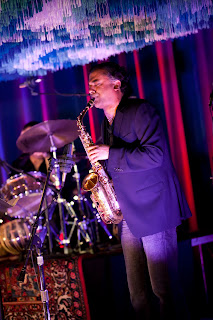 Bop has been famously influenced by Indian classical (Miles Davis’ Kind of Blue, John Coltrane’s Village Vanguard recordings), but on Friday it seemed more that the former was influencing the latter. A trio format centered on saxophone and guitar and a sense of push-and-pull syncopation – those are the trappings of jazz. But the trio’s music never swung and wasn’t rooted in the blues. It was Indian music in a jazz context, not the other way around.

The enthralling thing about this trio is how much it values single-stream melody, while insisting on ubiquitous collaboration. Like the Paul Motian Trio and the Bill Evans Trio before that, all three parts are almost constantly conjoined. When Abbasi ventured off on his own, Mahanthappa continued to play – only he moved his horn away from the microphone, or held a quiet bass note, adding impasto without throwing in any new colors. When Weiss seemed to be entering a drum solo, within 10 seconds his syncopated battering would usually be swallowed up again in the trio’s collective wave.

Within this framework, Abbasi explored the possibilities of an instrument that’s got a chordal design but also a resonant, enveloping sound when played in single-note lines. He tossed in chords, purposeful packages of three or four notes, but he was at his best when constructing mournful narratives. With them, Abbasi proved that melody can make you hear harmony – and feel the pathos that some harmonies command – even when no chords are being played. This was the lesson buried in the slow, seeping radiance of “Looking out, Looking In,” a short “collective meditation” that Abbasi and Mahanthappa played to open the set. And on the fourth tune, Ravi Shankar’s “Vandanaa Trayee,” when Abbasi attacked with stealthy melodies during a solo guitar intro (a rare solitary moment in the evening).

The moments of high intensity were effective, too. The second tune, the title track from the Indo-Pak Coalition’s record Apti, had a fast, almost artillery-like melody that caught your ear and got stuck in your head. And Weiss’ impressive vocal improvisation was one of the night’s few moments when listeners dared to interrupt the pact being forged onstage with applause.