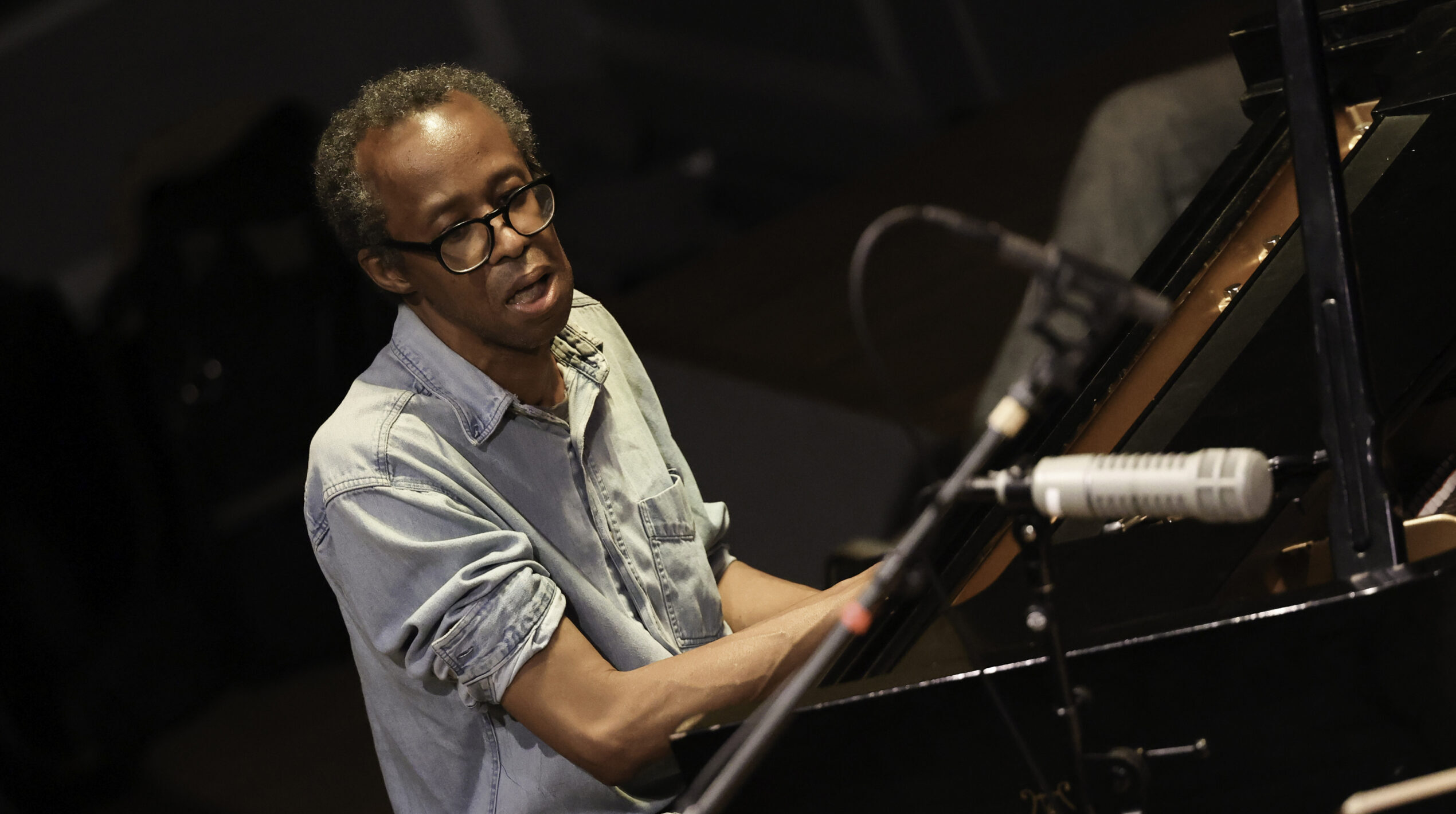 Matthew Shipp will play at Wild Days this Friday in a co-presentation of the DC Jazz Festival and Transparent Productions. Courtesy Eva Kapanadze
Interviews

The avant-garde piano luminary Matthew Shipp is always fearless, often ambiguous and unendingly ambivalent about how his music is received by the audience, so long as he knows what he has produced is honest and meaningful. The 61-year-old pianist makes work that blends the more formalized structures and timbres of the bop tradition with avant explorations of meter, texture and cadence. Listen to a track like “Spiderweb,” from his 2021 solo album Codebreaker, and you can hear the piece develop from Monk-ish noir balladry to great leaps in tonality and time, all the while exploring the space between the ideas of “jazz” and “improvisation” as histories and practices. Shipp, for one, does not care what you call his music: “Call it ‘Matthew Catthew,’” he said in an interview last week. “Call it ‘shit.’ … What I do is the pure act of whatever it is, so any label you apply to it is not necessarily going to be accurate.”

Shipp, who has been based in New York’s East Village since the 1980s,  sees his role as an artist as that of “a conduit for the possibility for touching a deep part of yourself,” he said. “If someone hears me and they don’t like it because they think jazz piano should be a certain thing — maybe like Bill Evans does it or Herbie Hancock does it — I don’t care, because I’ve hit a deep nerve inside myself.” He sees the act of performance as an attempt to peel back the layers within himself, and within the listener, in order to find and inspire that deep spiritual core within all of us.

On Friday, Shipp will once again attempt the impossible — capturing pure spirit in musical form — at Wild Days, the Eaton hotel’s rooftop bar, in a free show co-presented by the DC Jazz Festival and Transparent Productions. I spoke to Shipp over the phone to hear more about his singular musical vision and his philosophy of improvisation.

CapitalBop: I was reading the liner notes for your 2021 solo piano album, Codebreaker, and you talked about how your motivations, when you play, “aren’t always conscious” and happen on their own. What are those motivations? What do you try to do at the piano?

Matthew Shipp: When I’m at the piano I’m trying to have a pure dance of the energy that’s flowing through me at the time. I’m not really trying to do anything. [Pauses] Well, obviously, I’m trying to make a coherent statement of music but if the idea is to let being, pure being, be being, the idea is for whatever it’s supposed to be, to be. In essence, when you say that, you’re saying [you’re] trying to let nature be nature, or spirit be spirit. But being that with humans you have a lot of built-in complexity from the time we’re born, it actually takes a lot to bypass a lot of cultural information and try to get to what the pure idea is.

CB: What does it take to get past that cultural information and to get to that purity?

MS: I would say it takes an openness of mind and spirit. It takes an inquisitive nature. It takes a “not caring” about the consequences and it takes something undefinable. I don’t know why certain people might have more of a clear channel to some pure realm of information than others, but sometimes that’s the case. So, I think it’s all of the above.

MS: In the realm of improvisation, practicing exists for allowing yourself to have confidence, and the ability to relax. You don’t want to be clutching at yourself when you’re playing, or thinking, “I want to show the people that I can do this or that or whatever.” You want to really let go and let it be, which isn’t easy in a room full of people that are quiet, that are looking at you, and when you know that journalists might be there. There’s a whole lot that goes into a performance as far as the ritual of the society that it is in: You’re up there — and I’m talking about being in the middle of some kind of pure space — but you’re in the middle of millions of agendas. So, the actual practicing is a matter of spending time getting so in tune with yourself and your language that you can actually completely relax and go with the flow when you’re in front of a group of people.

I don’t exactly know how to answer the question, “How do you practice for that?” … But the practicing is basically to gain the needed physical and mental facility, hopefully, to let go. Some people practice and they learn licks and they play their own pieces … and the practicing is a mechanical way to keep playing what you always play. So, practicing can backfire as far as what I’m talking about, in being able to open up a clear being in the mind. But everybody is so different: One person practices five hours and another person practices five hours, and the results are going to be completely different for reasons none of us really understand.

CB: I was thinking about how what you’re saying relates — hopefully — to something Vijay Iyer said earlier this year: “The piano is a very environmental instrument … It’s almost like you’re playing the room, we’re adapting to the space we’re in.” How do you respond to that?

MS: I’m not sure what he’s talking about, because every piano you play is different. Paul Bley talked about how he didn’t believe in practicing, even though he was a virtuoso when he was 14 years old. He said, “Why practice? Because every time you go out to different performance venues, the piano is different, and every instrument has its own personality.” I would say that it’s very complex. You have this inanimate object called the piano, and you have yourself — which, you are a mental, physical and spiritual being. There’s physical resistance because you have to push the keys down but at the same time it’s your mind and your spirit that are the invisible things that dictate what you do. … And then there’s a room: There’s an environment, there’s a space, there’s acoustics in the space and then there’s other people in the space…. If you get 200 or 300 people in there, you have 200 or 300 different psychological spaces compared with your own, compared to the inanimate object, compared to the room with acoustics. And you’re supposed to be doing this pure act called “playing the piano,” whatever that entails for you.

So that act, in its purity — if such a thing can exist in its purity — is intersecting with your agenda and with 100 other agendas and with the physical components of the room. It becomes a ritual of myriad levels of complexity. What is it in its pure form? Who knows, because how can pull all the layers of the onion back to the pure form? As a performer, my goal is to occupy the purity as close as you can, given all of that. And everything is going to be a distortion because we’re dealing with a distorted group — I don’t want to say “society,” but a distorted environment…. My goal is to be a dancer on the instrument … that points to some kind of intention for some type of purity.

CB: Is that the artist’s role as you see it? Maybe you don’t want to speak for anyone else, but as you see your role as an artist, is that what you see? Being a kind of bodhisattva, leading others to a purer sense of being?

MS: That’s what I see my vocation as, yes: as a conduit for the possibility for touching a deep part of yourself…. So therefore, if someone hears me and they don’t like it because they think jazz piano should be a certain thing — maybe like Bill Evans does it or Herbie Hancock does it — I don’t care because I’ve hit a deep nerve inside myself. What I’m doing is what it has to be: There’s no other way. That’s what comes up out of the deep. If somebody doesn’t like it, that’s their problem, not mine. I guess the point of inspiration is that if you hit that deep well and you’re willing to give into it, you’re being what you’re supposed to be in that moment. And that’s what I hope to transmit.

CB: Is there something about improvisation and about “jazz” that makes that fertile for this kind of expression and digging?

MS: I think what’s great about jazz is that — well, first of all, everything’s an improvisation. If you want to look at the whole world, God’s just fucking around making stuff, and stuff comes together and stuff comes apart. Every one of us is a very unique personality and … there’s never been anybody exactly like them. It’s a structural coming together of certain factors that creates a very unique thing for a specific amount of time, and those constituents fall apart and form something else; that’s how creation works. On a certain level the human race is an improvisation….

When you ask the question about improvisation as it relates to jazz, as it relates to society, let’s just start out with the fact that the whole fucking cosmos is an improvisation. Now you can get down to the specifics of how jazz exists in this culture. …I guess my answer is that improvisation is a part of existence, period. So, it doesn’t surprise me that there would be musical forms where it would be the premise of the exploration…. It inevitably had to happen in some cultures.

CB: When you record pieces like the ones on Codebreaker, do you have ideas in mind? Are these compositions or are they “improvisations?”

MS: There’s ideas. I mean, I work on my language constantly. So, with that, even if you’re not writing out complete lead sheets or thoroughly composed scores, if you’re a disciplined improviser that works on your language all the time, you’re working out ideas and you have threads of things you can draw on or a repository of different gestures and ideas; that goes back to the practice. I’m not sure if it was Debussy, but I think I recall a quote by him that said, “All composers have one idea. The great composers figure out how to disguise that one idea.” … Everybody has a kernel of an idea that is them; and the idea of practicing is to figure out how to expand that idea into a million possibilities…. Now, nature aids you in that because improvisation is a by-product of the time. If I sit down on the instrument from 1:00 to 1:10, that improvisation is going to be different than if I sit at the instrument from 1:30 to 1:40, just by the fact that the universe is completely different — whether time actually exists out there or not. … There’s a whole different set of parameters operating. For example, if I eat lunch at 12, how it affects my stomach from 1:00 to 1:10 will be different than how it’s affecting my stomach from 1:30 to 1:40. Physical things like that do actually enter into the whole mindset of how you’re playing…. All of that is to say that, even with a finite language, nature in one way determines how an improvisation is different…. You heard the quote from Heraclitus, “You can’t step in the same river twice,” because the second time you step in, things have shifted. It’s the same with us: The universe, on one level, has shifted; your psychology has shifted; and things are just different.