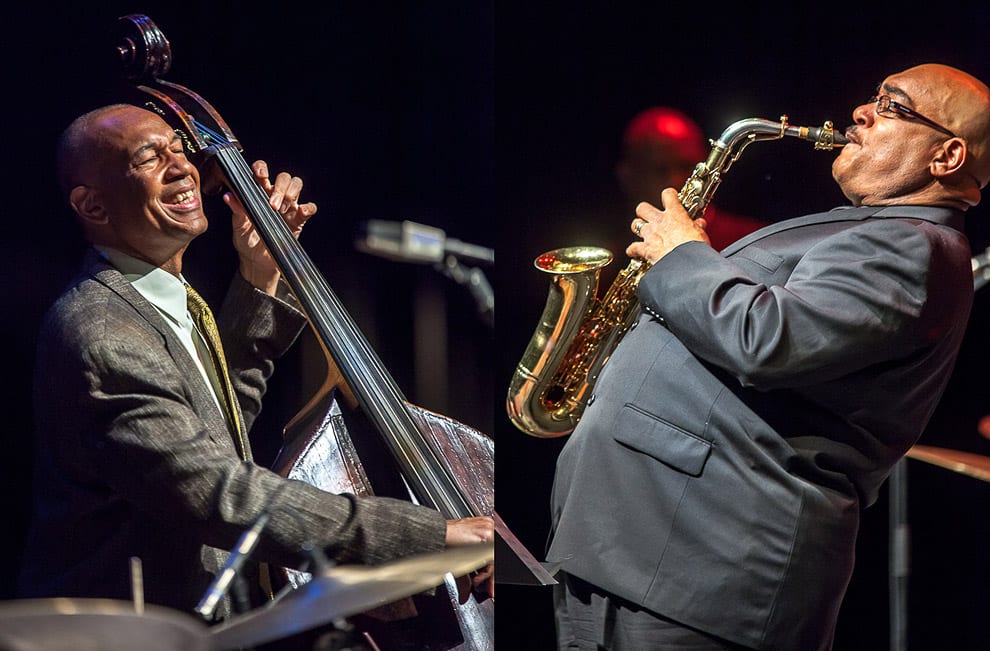 Look around the jazz world and you’ll find bands of brothers: the Heath Brothers and the Brecker Brothers made careers of performing together, and they are only the tip of the iceberg. The musical bond between siblings sometimes grows so strong that they can seem to operate on exclusive territory, achieving a synergy that those around them can only aspire to.

The Clayton Brothers, who perform this Sunday at Bethesda Blues and Jazz Supper Club, have not attained the same level of prominence as the Heaths or the Breckers, but they too deserve consideration among the greats.

The quintet led by saxophonist Jeff Clayton and bassist John uses a hard-bop format, and draws on the two leaders’ varied interests within the realm of straight-ahead jazz. Jeff was always into classic hard-bop combos, along the lines of the Jazz Crusaders and the Modern Jazz Quartet, while John took a special liking to the sound of classic big bands and piano trios. The Clayton Brothers are one of the best hard-bop bands in the game today because they blend these influences into a sound that focuses on rich harmony and solid, tight-knit rhythm. “Blow Your Horn,” from 2005’s Back in the Swing of Things, conveys high action through fluid groove; “Wild Man,” from the Grammy-nominated Brother to Brother (2008), works a more relaxed pocket, with melody that delicately approaches a crazed climax.

John and Jeff Clayton have been playing professionally on their instruments since they were in high school in Venice, Calif. “I knew I wanted to be a professional musician from when I was nine,” remembered Jeff, 60. He carried that passion through school until one of his teachers eventually suggested he move from clarinet to saxophone, because of his seriousness about the music. That’s when he started performing in the school bands, and playing along to jazz albums in his spare time. Upon graduation Jeff immediately enrolled in the UCLA music program, where his teacher was a session musician working the Los Angeles studio circuit.

Now 62, John started in the high school band as well, but he was particularly interested in the arrangements they were playing. So unlike most of his peers, he went back home and listened to everything he could get by Duke Ellington, learning the melodies and chord changes. He did the same with the music of Count Basie and Oscar Peterson. So when he later met Ray Brown in a college course that the esteemed bassist was teaching at UCLA, John sought him out. Brown took the young bassist under his wing, teaching him chops and stressing that facility was the single most important thing to possess before launching one’s career.

After college both brothers went professional, but similarly to the elder jazz brotherhoods, they launched in different directions. Each of their paths appeared to follow the course that their respective mentors had lain down for them. “Most musicians who remain in the community, who bring love to the stage, will find people they can share it with,” John says. This is how he feels about Brown’s work with him.

Jeff went on to start playing with major artists including Ella Fitzgerald, Earth, Wind and Fire, Stevie Wonder, Michael Jackson, Gladys Night, Frank Sinatra, and Sammy Davis Jr. “Studio music was always changing,” he said. “First it was R&B, then it was soul, then disco, then funk, and when all of that settled down I had jazz to go back to.”

At the pinnacles of their respective careers, the brothers were in two separate musical worlds. But they came together to form the Clayton Brothers in the mid-1970s, when John was playing with the Monty Alexander Trio and performing and composing with the Count Basie Orchestra in some of the legendary bandleader’s last years. Then in the mid-1980s, John and Jeff united to form the Clayton-Hamilton Jazz Orchestra, with Jeff Hamilton on drums (also a veteran of Monty Alexander’s trio). The orchestra naturally suited John, since he had just finished working in the Amsterdam Philharmonic Orchestra and had deep experience as an arranger.

Today both the Clayton Brothers and the Clayton-Hamilton Jazz Orchestra continue to perform extensively. To John and Jeff, all of their music is an exploration of the heritage that they emerge from, and an exploration of where it might take them in the future. “Focus on the music and stay honest to what you need to grow, and your growth will in turn be honest,” John said.