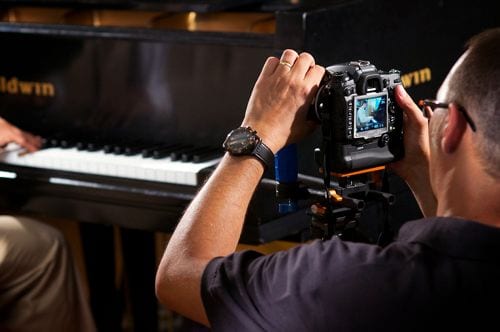 Stefan Immler films Dwayne Adell, during the production of Oxygen for the Ears. Courtesy Giganova Productions

On a Monday evening in June, one of the largest gatherings of D.C. jazz musicians in recent memory assembled at the Atlas Performing Arts Center, on H Street NE. But this wasn’t a gig or a jam session. It was a private screening of Oxygen for the Ears: Living Jazz, a new documentary film on the District’s jazz scene that will have its first public showing in the District tonight at the National Navy Museum.

In what you might call true D.C. jazz fashion, a great moment unfolded at the Atlas with minimal fanfare: There was no red carpet, no media play-by-play, no flashing cameras. Only the film and the audience. And what an audience: It was a cross-section of the local scene, with lions young and old united in order to see on the big screen a cinematic depiction of the community that has molded them.

Oxygen for the Ears is the first feature film to tell the story of the vibrant jazz community in Washington, D.C. – both its past and its present. It crucially places the scene within the context of the African-American community from whence it came and from which it continues to draw. The film highlights important D.C. musicians, from Duke Ellington all the way up to Dwayne Adell, presenting a fine overview of the unique community in an almost fairytale-like fashion. Each musician to receive a spotlight embodies a fully fledged character, which adds to the narrative, with vivid stories of jazz musicians playing in nightclubs and jamming. It all calls to mind a Blue Note Records photograph from Francis Wolff.

The man behind the movie is himself a sort of quintessential jazz character, with his own tale to tell. Stefan Immler, like Wolff, is a German-born and -bred jazz fan. The 44-year-old astrophysicist never imagined that he would become a filmmaker, until recently. As a child he wished to play saxophone, but was never allowed the opportunity. Instead, his instrument was the accordion. Still, a love of jazz developed throughout his life, and culminated with his move to the United States 12 years ago. When he moved to D.C. eight years ago, he encountered his first living, vibrant jazz community. After spending a few years simply being a fan, he soon discovered how little the rest of the world knew of jazz in the District. He found that even within D.C. many were unaware of the rich jazz community here.

“It was spontaneous idea,” he said of his decision to make the film. On his regular route to work, Immler would pass the Howard Theatre, which was then nothing more than a decrepit shell of a building. Feeling the energy of the history and legacy that the theater represented, Immler was motivated to document it. He wanted to make a film that would depict the city’s past glory, but also encompass the present-day dynamism he experienced regularly as an avid fan. One day, he simply bought a camera and started shooting.

While Immler’s main goal was to shine a light upon the local community, he recognized the need for true star power. As a result, he wanted to include some popular names in the jazz industry, alongside some emerging artists locally. He was able to interview Ravi Coltrane as well as Esperanza Spalding for the film, and he filmed her first performance at the White House. He was also able to film and highlight three of D.C.’s most venerable legends, Butch Warren, Andrew White and Buck Hill, musicians long overdue for wider recognition through film. The title itself draws from a line by the late Jimmy “Junebug” Jackson, who is captured equating jazz music with “oxygen…for the ears.”

The film has already begun to acquire acclaim, and has been selected to a number of festivals. It is achieving its goal, bringing to light a community of musicians and the immense history that they perpetuate – an intertwined history of both jazz and the Black experience in Washington, D.C. As a finalist in the Park City Film Music Festival and a recipient of an Award of Merit at the Indie Fest, among numerous other accolades, the film seems to be on its way to serious recognition and distribution. All the better for a scene that deserves to be known and respected as one of the jazz world’s strongest.

The first public screening in D.C. of Oxygen for the Ears: Living Jazz takes place at 6 p.m. tonight at the National Navy Museum, as part of the World Music & Independent Film Festival. More info is available here, and tickets can be purchased for $10 by clicking here and following the instructions. The film’s official premiere is on Oct. 12, as part of the REEL Independent Film Extravaganza.