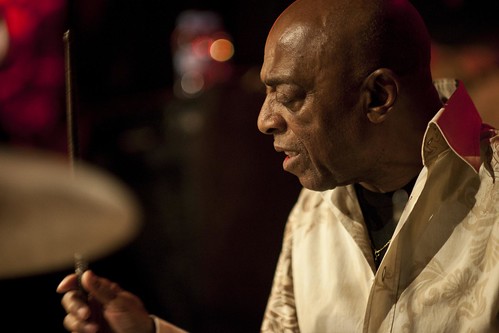 Roy Haynes will lead his Fountain of Youth Band at the MAJF this weekend. Courtesy Thundershead/flickr

The Mid-Atlantic Jazz Festival is a momentous ritual for D.C.-area jazz fans. It comes with a hefty price tag – an all-access pass will set you back $235 – but there is little denying the merit of this fest, the hippest happening ever to hit the Rockville Hilton. It’s both a numinous celebration of the music’s masters, and an immersive rite for initiate students (Executive Director Paul Carr, himself a major educator, always ensures that a variety of student ensembles get to play at the MAJF, thereby also giving them the opportunity to hear their mentors’ performances on adjacent stages).

The music goes on all day and all evening, for three days; on Saturday, things kick off at an ungodly (or, at least, very un-jazzy) 9 a.m. So, even if you shell out for an all-access pass, you’ll probably need a bit of guidance as you wade your way through all the options. Below you’ll find CapitalBop’s recommendations. You can also negotiate with the full schedule at the MAJF website.

A nuanced and nearly flawless vocalist, Carmen Bradford burst onto the jazz scene in the 1980s as a member of the Count Basie Orchestra. Fame has not found her in the way it has Dianne Reeves or Cassandra Wilson, but Bradford’s blues-inflected, bottomless vocals merit similar recognition. Bradford will appear here with the new Mid-Atlantic Jazz Orchestra, led by Paul Carr. Joining as a special guest will be Terell Stafford, an authoritative trumpeter whose relationship with the blues has only grown deeper over his two decades as a performer on the national stage.

Warren Wolf is a drummer, pianist and vibraphonist – but it’s best not to appraise him as some sort of polymath whose worth can be measured by how far he stretches his skill. No, on his primary instrument, the vibes, he goes deep, fluttering through melodies that are bluesy and breathless and throwing together heart-swelling harmonies. Wolf, a Baltimorean and a rising star on the national jazz scene, appears here with his quintet. Earlier in the day, at 3 p.m., you can find him in an interview with Bobby Hill of WPFW 89.3 FM, at the festival’s Billy Taylor Room.

There’s that old expression about going through something arduous, or fabulously thrilling, and living to tell about it. For Roy Haynes, you can add “living to expand upon it” to that saying. He came up playing alongside Sarah Vaughan, Lester Young and Charlie Parker in the 1940s, defining a sound that was constantly verging and charging forward. He’s never decelerated. At 86, Haynes is still swinging hard – he’s even sprightly enough to tap dance onstage between songs. Part of what’s kept him young has been his ensemble, which he calls the Fountain of Youth Band, and which consists of a rotating cast of much-younger musicians. These days, he’s joined by the flash-frying alto saxophonist Jaleel Shaw, pianist Martin Berjerano and bassist David Wong.

Trumpeter Nicholas Payton flung up a blog post in November called “On Why Jazz Isn’t Cool Anymore,” and the internet has been aflame ever since with discussions about the latent racial dilemmas that underpin every machination of the jazz world (whether or not we want to admit that they do). It’s about time these things got a good airing out. In the post, Payton suggests abandoning the word jazz – which, he says, represents an oppressive system that subjugates Black musicians who comport themselves with integrity – in favor of the term Black American Music (abbreviated as #BAM). One of the greatest blemishes on the important discussion he is leading has been Payton’s online persona – quick to whiplash against even the slightest quibble from a fellow blogger or musician, and just as eager to blur the divide between ideological disagreements and personal attacks. Luckily, Payton’s approach in person is drastically more measured, and it does much greater service to his worthy cause. That’s why this interview with WPFW’s Willard Jenkins – about Payton’s motivations for starting the #BAM discussion and his hopes for where it will lead us – is sure to be rewarding.

Festival director Paul Carr is one of the D.C. area’s most accomplished bop saxophonists, and also one of its most important jazz educators. Here he leads his regular quintet, which boasts a lineup of star musicians – it’s a group without a weak link. The band features Terell Stafford on trumpet, Joey Calderazzo on piano, Michael Bowie on bass and Lewis Nash on drums. Its sound is triumphantly soulful, with a fun-loving swagger set in light relief to its serious chops. The band will soon be releasing a new CD, and Carr says that there will be copies on hand for advance purchase at his festival-capping performance.