Interviews
I first heard about Rickk Boulchard in 2016. My new boss, editor-in-chief Giovanni Russonello, asked me if I had friended him on Facebook yet, and when I replied no, he was emphatic: “You HAVE to.” 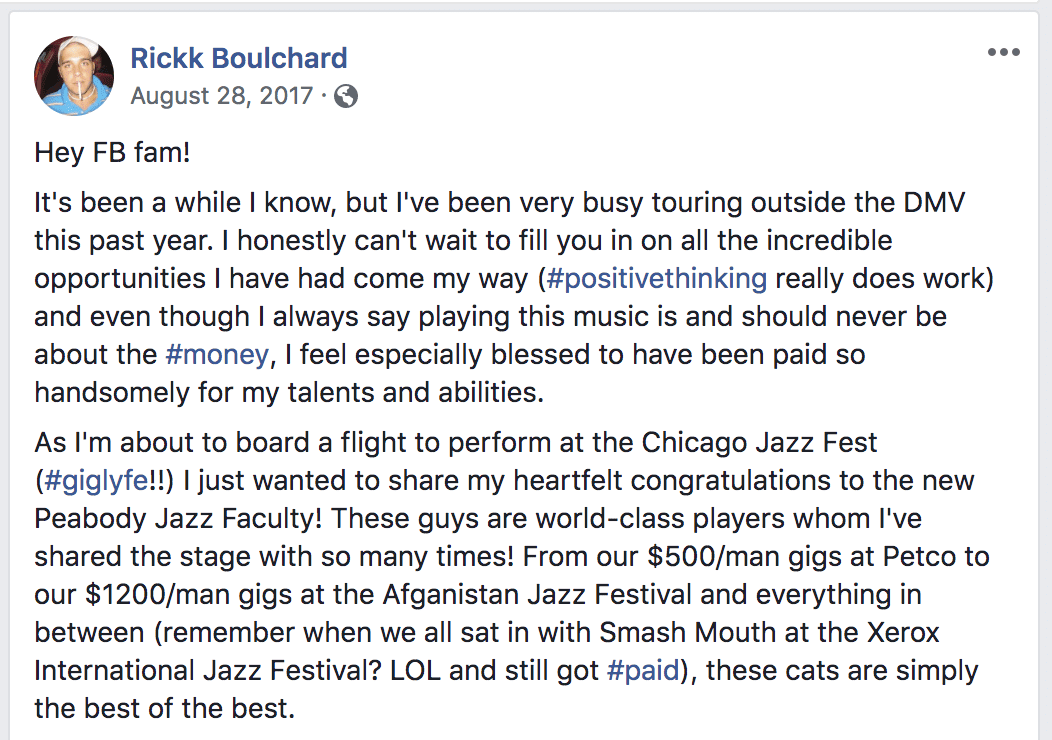 When I did look at Rickk’s profile, I was immediately humbled. How was I not already hip to such a prolific musician on the D.C. scene? According to Rickk’s social media presence, he had been a Strathmore artist-in-residence, on faculty at Peabody Conservatory and on multiple European tours. And in an era where working musicians navigate an increasingly thankless music economy, Rickk seemed to be getting lots of lucrative gigs. And he didn’t hesitate to boast about these gigs on his Facebook timeline, which had become a veritable bible of #blessed jazz musicianship.

In the spirit of togetherness and charity, Rickk’s timeline is full of gig offers. Some are lucrative, some downright opulent — especially when it comes to getting musicians “exposure.” Rickk’s gigs are great for that.

As I came to find out, Rickk has had a bit of a checkered past, partly due to his association with his uncle Randyy Boulchard, who was arrested four years ago for shoplifting five rib-eye steaks at a Wal-Mart.

But that can’t take away from Rickk’s long list of personal achievements. While I’ve still never seen him in person, Rickk has more than a few stories of legendary gigs played in D.C., which he enthusiastically shares with his many Facebook friends from around the scene. 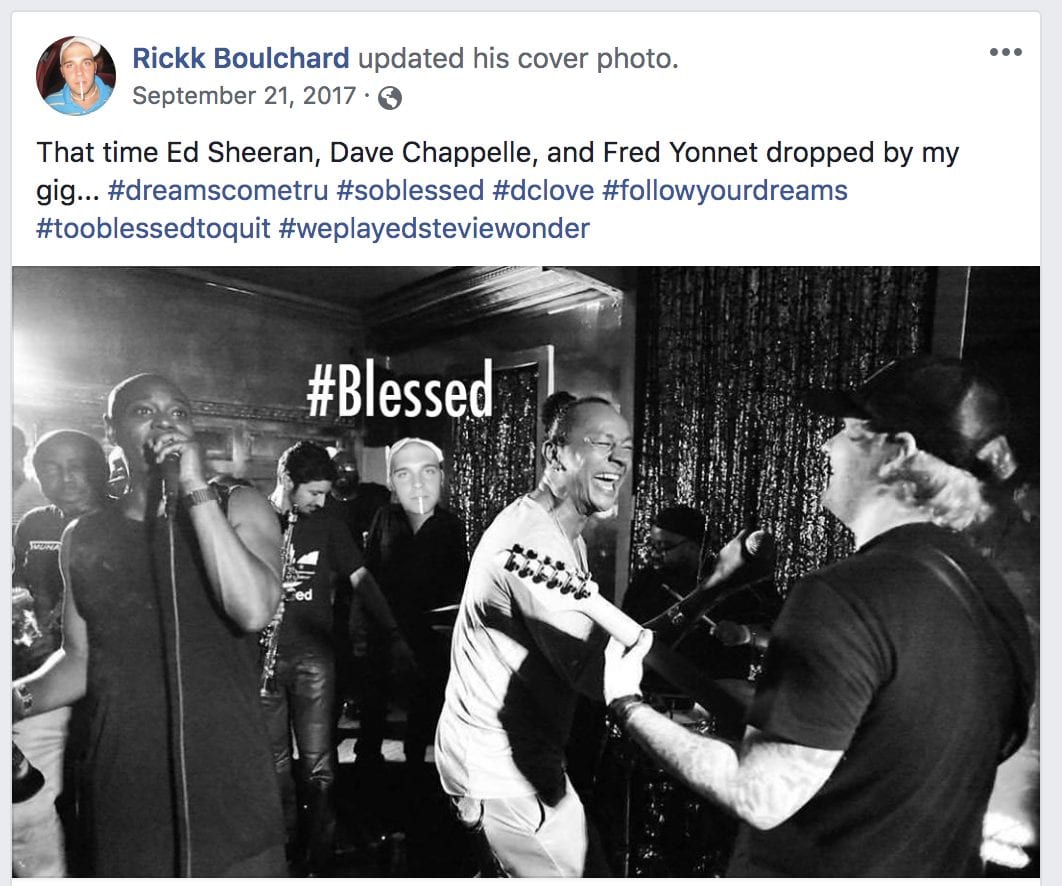 So to commemorate the start of April, Jazz Appreciation Month, I decided it was about time to put a spotlight on this local hero and social media pioneer (who is, to be sure, nobody’s fool). Rickk graciously agreed to answer some questions from CapitalBop via Facebook Messenger. He even waived his standard $500 interview fee, and congratulated me on all the work CapitalBop is doing the scene, like presenting Ben Wendel this past Saturday at (as he put it) the “Tropicana Juice Bar.”

CapitalBop: It seems that you do quite well for yourself as a gigging musician, despite how hard that can be in the jazz world. What’s your secret?

Rickk Boulchard: I disagree with the premise of your question — I don’t think it’s difficult at all to make a good living playing jazz. The problem is so many of these young cats are out here are trying to diversify and spend too much time trying to get hired by wedding bands, one-chord groove bands, or those military bands. If they just stayed focused on the Music, and transcribing the masters, they’d be working as much as I do. If anyone says they aren’t gigging as much as they should be, I would just say they aren’t that dedicated to the Music. It’s like my good friend and long-time collaborator Mike Moreno says: “People who can play are working.”

‘Despite many current lawsuits from their estates, I’ve been able to exhume the bodies of many jazz legends and have recorded albums featuring their remains. My drummer is using femurs instead of drumsticks — very Bob-Moses-esque, if you ask me.’

CB: Tell me about your favorite gig memory.

RB: I think my favorite gig memory would have to be when I headlined NYE last year at Booze Alley — it’s a DIY spot in the alley where Blues Alley is located. My band was actually playing at the same time Ahmad Jamal trio was, and it was unbelievable! His band actually just stopped playing and came outside in the alley to hear me and his audience followed him out too! We ended up trading choruses on one of my originals called “Lessons, Struggles and Awakenings in B-flat (in 13/4): A Tribute to the Masters.” Afterwards Ahmad told me I was the baddest cat he’d ever heard. It’s experiences like these that remind me why I asked my parents for $150,000 for my jazz education.

CB: You seem to be pretty prolific on the D.C. scene, but it’s hard to actually find you out playing gigs. Can you say a little about how you use social media to keep in touch with your fans and fellow musicians?

RB: Hmmm, I get that a lot! I will say that in all the gigs I’ve posted about on FB, I have never once seen any local cats who claim to “support the scene” come out to my gigs. And even when I advertise musicians can sit in with my band for half price! Anyways, re: social media, I think it’s of utmost importance for us musicians to advertise what we’re doing online as much as possible. I’ve heard cats say that posting stuff online is pointless because “only other musicians look at that stuff.” And I actually agree! If you want to promote your brand and grow your audience — hire a manager! That’s what they’re for! But I constantly post about all my gigs and how much bread I’m making on them, knowing full well only other cats are reading that stuff. I don’t mean to make anyone feel insecure or anything! I just want other cats to know what the going rates are and how much they really should be charging for gigs. Know your value!

CB: You talk a lot about staying #blessed. Is the hashtag a crucial detail? What are the differences between being #blessed and just being regular-blessed?

RB: Oh absolutely! I learned many years ago about the importance of using hashtags to grow your brand. And let me tell you — when you walk into any bar in D.C. now and ask a cat if they’re staying blessed, I guarantee they immediately think of Rickk. That’s no coincidence. There are so many differences between being #blessed and just regular blessed — unfortunately, it’s really not up to me to describe them. If you have to ask what is #blessed, then you’ll probably never know …

RB: BRO it’s already happening! You think Ben Wendel is a real person? He was created in the Los Alamos National Laboratory in New Mexico as a cross collaboration with Bill Clinton, Banana Republic, Jazz at Lincoln Center and Brooks Brothers! I was just one of several consultants (including Bob Mintzer, Chris Potter and Ravi Coltrane) who contributed hot licks to the beta version of Wendows95 (that’s his operating system). If you don’t believe me, check out the most recent episode of InfoWars. It’s all there!

‘You think Ben Wendel is a real person? He was created in the Los Alamos National Laboratory in New Mexico as a cross collaboration with Bill Clinton, Banana Republic, Jazz at Lincoln Center and Brooks Brothers!’

CB: Anything else you want to let your fans know?

RB: Well I think now would be a great time to give a shout out to my new concept album called Remains. I was inspired by all these young cats who, instead of trying to push the Music further in new directions, have just been hiring old masters to play standards with them in an attempt to boost their nascent careers. I think it’s a bold original idea and now I want to take this a step further by featuring deceased greats on my album. Now I know you’re probably thinking “but Rickk, these people are dead — how can you play with them?” It’s easy! Despite many current lawsuits from their estates, I’ve been able to exhume the bodies of many jazz legends and have recorded albums featuring their remains. My drummer is using femurs instead of drumsticks — very Bob-Moses-esque, if you ask me. I even was able to create a recorder out of some other bones we dug up. Of course, the first single from the album is the Chick Corea hit, “Tones for Joan’s Bones.” Keep an eye out for the record! It’s sure to be a bone-ified success!