D.C.’s most storied drummer, and one of its most boisterously joyful spirits, departed from this earth on Saturday. After just under four years in town, Jimmy “Junebug” Jackson had become a patriarch of the District jazz scene and a treasured friend to almost all its major players. He was 55.

At the popular H St. jazz club HR-57, Jackson was a jack of all trades (and master of just about every one), serving as house drummer, unofficial comedian and mentor to the young musicians who ventured onto the stage at the club’s regular jam sessions. Occasionally, Jackson would even pick up the microphone to croon a ballad in his sibilant, amicable tenor. Across town, at Eighteenth Street Lounge, Jackson played every weekend, driving the dance floor with thunderous grooves and a signature, trenchant shuffle beat. 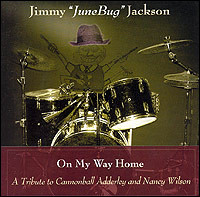 Click to buy On My Way Home, Jackson's only CD as a leader

After becoming renowned in Atlanta for his prowess as a funk drummer, Jackson honed his jazz chops alongside a master, touring for 21 years with organ great Jimmy Smith. By the time he arrived in D.C., Jackson had also spent a number of years on the New York jazz scene, where he developed a strong reputation as a deft player with a convivial spirit and an incorrigible wit.

Below, a number of his comrades from the D.C. scene reflect on their time with Jackson, and recount some of the lessons he conferred on them.

Junebug had a million stories about being on the road with Jimmy Smith. During that time, they played with so many guys. He had a story about Wynton being at the Mt. Fuji Jazz Festival. I think at one point he had challenged Wynton to a game of basketball because Wynton is a big basketball guy, but Junebug didn’t really play basketball. I guess he was kinda talking some trash, and they were supposed to have a one-on-one game at something like 8 in the morning. Apparently all the media was there, a whole bunch of reporters were there, and as soon as Junebug touched the ball, Wynton realized that the joke was on him – because Junebug couldn’t even dribble!

Just a couple of months ago, the Kennedy Center did the tribute to Sonny Rollins. During the tribute they had all the jazz greats up on stage. He called me to tell me to watch it, and he told me he’d played with every single person on that stage. Herbie Hancock, Jimmy Heath, Chrsitian McBride – all of the major cats were up on that stage.

As far as his musicianship, Jimmy was the highest caliber of a musician. He had been on the road and he had worked with the best musicians for years. When we worked together, one thing he really showed me was how to always try to do your best – especially at the gig. For the job, he was never late. Not for one gig, the whole two years we worked together. And he was the greatest guy you could have to support the band: He would call all of the band members and make sure that they were going to be there. He just cared so much about the music.

His spirit was one of such family and brotherhood that it forced me to say, “Man, don’t ignore this brother.” So the first chance I had to hire him for my band, I did. I just never knew anybody that had so much pride and dignity in being a musician.

The D.C. jazz community is not always the most united; you have different scenes – the U St. scene, the Adams Morgan scene. The one thing everybody had in common by the time Junebug left us was that everybody knew Junebug. And if some people didn’t know you, Junebug was telling them about you.

I met Junebug right after he moved to D.C. in 2007, and he was a great friend ever since. He was always in a great mood and full of optimism; I had a blast hanging out with him. He gave a candid on-camera interview for our jazz documentary movie, which led to the title of the film: “Oxygen for the Ears.” The film will be released next month and will be dedicated to him as a celebration of his remarkable jazz life. Junebug once said, “You need jazz to breathe, you need jazz to feel good about yourself, just to be cool in life.” Junebug made our lives jazzier, and we will miss him!

Musically, Junebug was just the real deal. You could always feel his passion in the music. I thought I knew how to swing – until I met Junebug. The first time we ever played together, I remember looking back at him because it felt so good, and he just had that famous grin all over his face.

I witnessed him make strong musical connections with other people, too. He loved playing music with my friend, bassist Eliot Seppa. Every time I’d mention Eliot, Junebug would say, “That cat can play some bass!” With me, Eliot, Braxton Cook and other young musicians, he’d always tell people, “Yeah man, that’s my nephew.” So we’d call him Uncle Junebug. He’d joke around and say, “I changed that cat’s diapers – that motherfucker used to piss on me!” He was just showing how much he really felt like the young guys that he connected with were family to him. And we felt the same.