After last night’s prescient show from the youthful Elijah Jamal Quartet, nationally renowned (and universally controversial) pianist Eric Lewis stopped in for an unnanounced solo show. Tonight, things should get even more exciting: Lewis told CapitalBop he’s planning on returning to the club for a late-night jam session with the quartet, which will be performing for the second consecutive night.

Adorned in an orange suit and silver arm pads (no, I’m not making that up), Lewis last night hammered his way through a collection of songs in the style he calls “ROCKJAZZ.” It’s a genre played by one man only.

Some of it — such as the first song he played, a rendition of the Killers’ “Mr. Brightside” — amounts to no more than heavily lavish, loudly played renditions of rock and pop songs. Other times he gets more experimental. The performance’s high point came when he played a bristling take on “Sweet Home Alabama,” laying waste to the three-chord song with dissonant and far-out improvisations, and then medleyed into an equally bold take on John Coltrane’s “Giant Steps.”

The music isn’t for everyone. Some of the many jazz musicians in the house attested to liking his jazz better than his pop reconstructions. Which makes sense, given that Lewis’ jazz résumé includes highly regarded work with Wynton Marsalis and Elvin Jones.

But the pianist, who says he’s performed at HR-57 many times over the past 10 years, insists he’s onto something revolutionary — even if he hasn’t quite gotten there yet. “It’s in the stone, and I gotta chisel it out,” he told CapitalBop. “I know what it is, and I gotta get there. I almost got there tonight.”

And if many in the jazz audience don’t quite like what he’s doing, Lewis says, that’s fine too: He originally pursued this path as a sort of screw-you to them, anyway. “It started out as anger,” he said. “It was like, ‘I can win the Monk Competition [in 1999] and I can’t get a record deal? I can play with Elvin and Wynton and I can’t get signed to Blue Note, or to Warner?”

No matter how you feel about his ROCKJAZZ, Lewis’ promised appearance with the Elijah Jamal Quartet tonight is sure to be some top-notch jazz. That group is already beginning to innovate in exciting ways, and Lewis will surely push them out even further. 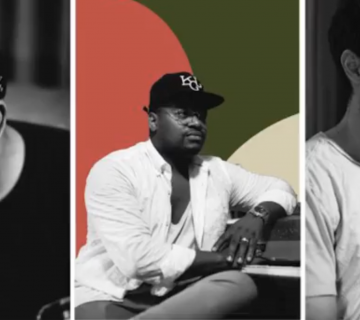