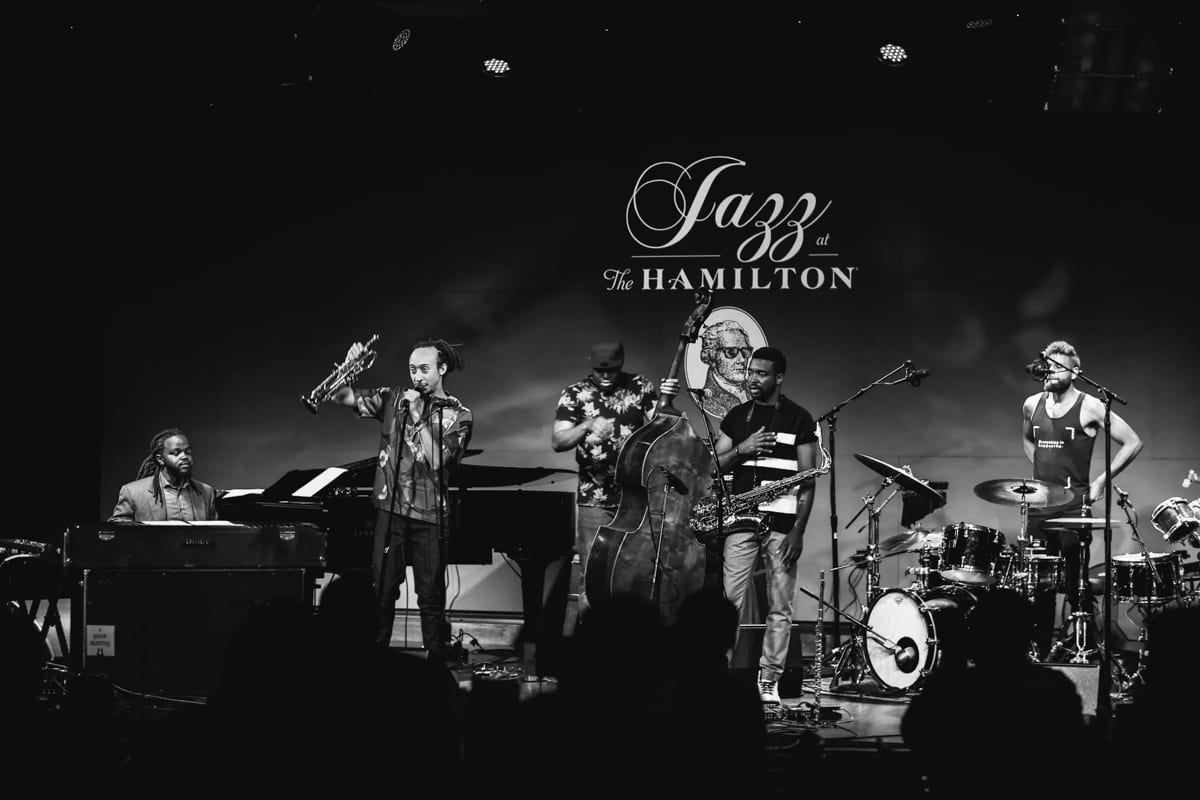 Theo Croker speaks to the audience during his debut performance as a headliner in D.C. Jati Lindsay/CapitalBop
Live reviews

Theo Croker knows how to make silence speak. The rising young trumpeter opened his D.C. debut on July 14 at the Hamilton with “Transcend,” a tune that featured full-band breaks so long it seemed as if the group had stopped playing altogether. But the reason for those silences quickly became evident: It was the raw energy that hit the crowd as soon as sound came flooding back.

“Transcend” ended with just such a moment, more powerful than any that had come before. The band broke the silence of its last break with a sustained chord that swept across the large hall. Croker stood stock still, round sunglasses shielding his face and long locs drawn up in a lazy bun behind him—a picture of focus.

Following the applause, bassist Eric Wheeler struck up a new groove, and Croker introduced his band. He laid down some house rules for the audience too. “One,” he began: “You must enjoy yourself. Two: you must show us that you’re enjoying yourself. And you must enjoy each other, and show each other love and peace, ‘cause that’s what we’re all about, alright?”

Croker’s bonhomie could have read as simplistic hippiedom, but it’s actually part of what makes his music so powerful. Like his opener, pianist Mark Meadows, Croker is distinguished by his passionate interpersonality, both on and off the bandstand. Throughout the evening, both bandleaders hinted at the cool insouciance that’s often associated with young jazz musicians, but their infectious positivity overwhelmed that image. They had the look, sure, but more than that, they exuded a desire to catalyze positive change.

A 2007 graduate of the Oberlin Conservatory, Croker has a rare knack for walking the tightrope between straight-ahead jazz and popular modern styles, while never seeming to betray either one. His 2014 album, AfroPhysicist, came just after he’d returned from a seven-year stint in China; it reflects the eclecticism of his sound, featuring energetic horn arrangements fused with a healthy dose of funk and R&B. 2016’s Escape Velocity took a somewhat more pensive tack, incorporating elements of soul jazz and flowing keyboard grooves for a mellow and mature sound. 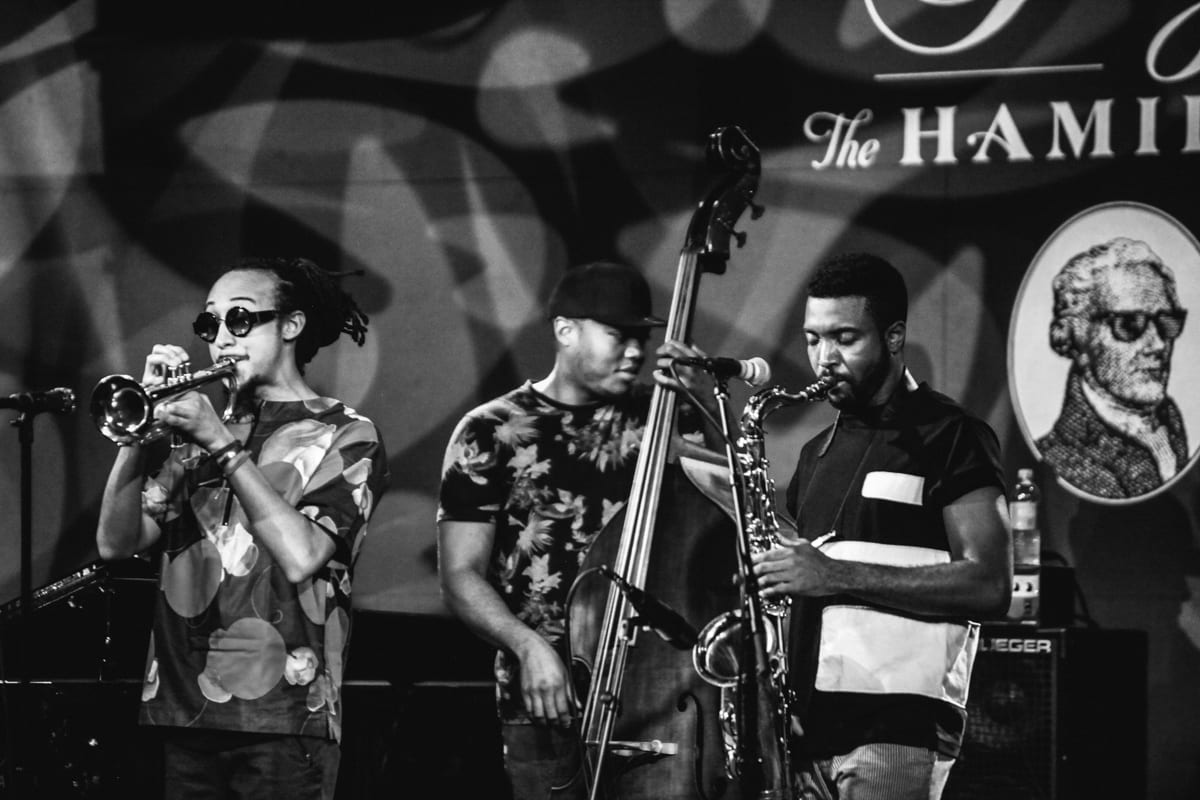 Overall, dressed in a black tank top and dark shades, maintained a close rapport with Wheeler and Gould; the musicians’ mutual respect was nearly tangible in the way they built a deep pocket and executed deft transitions. Near the close of the evening’s penultimate piece, the anthemic “Meditations,” Wheeler, a D.C. native, opened up into a minutes-long, unaccompanied solo, simultaneously maintaining the groove of the tune and chasing dazzling melodies far up the fingerboard. As Wheeler finally descended back into the groove, Croker cast a quick look across the stage, muttered, “Bridge,” and then the band was off, tearing back into the melody full bore, not 10 seconds after the end of the solo.

Still, Croker’s subtle attention to his audience throughout the evening was remarkable. Solos rarely wandered out of focus, and pieces were kept fairly short. (Escape Velocity has unusually short track lengths for a jazz record; not one runs beyond five and a half minutes.) When Croker and Ware were out of the spotlight musically, playing accompanying riffs or dropping out entirely, they followed suit physically, walking away to ensure audience sightlines to the rhythm section. And Croker ended the program as he’d begun it, by reaching beyond the stage to include his listeners. Singalong choruses of “It’s gonna be alright” echoed across the Hamilton, as Croker and his sidemen radiated warmth and serenity. 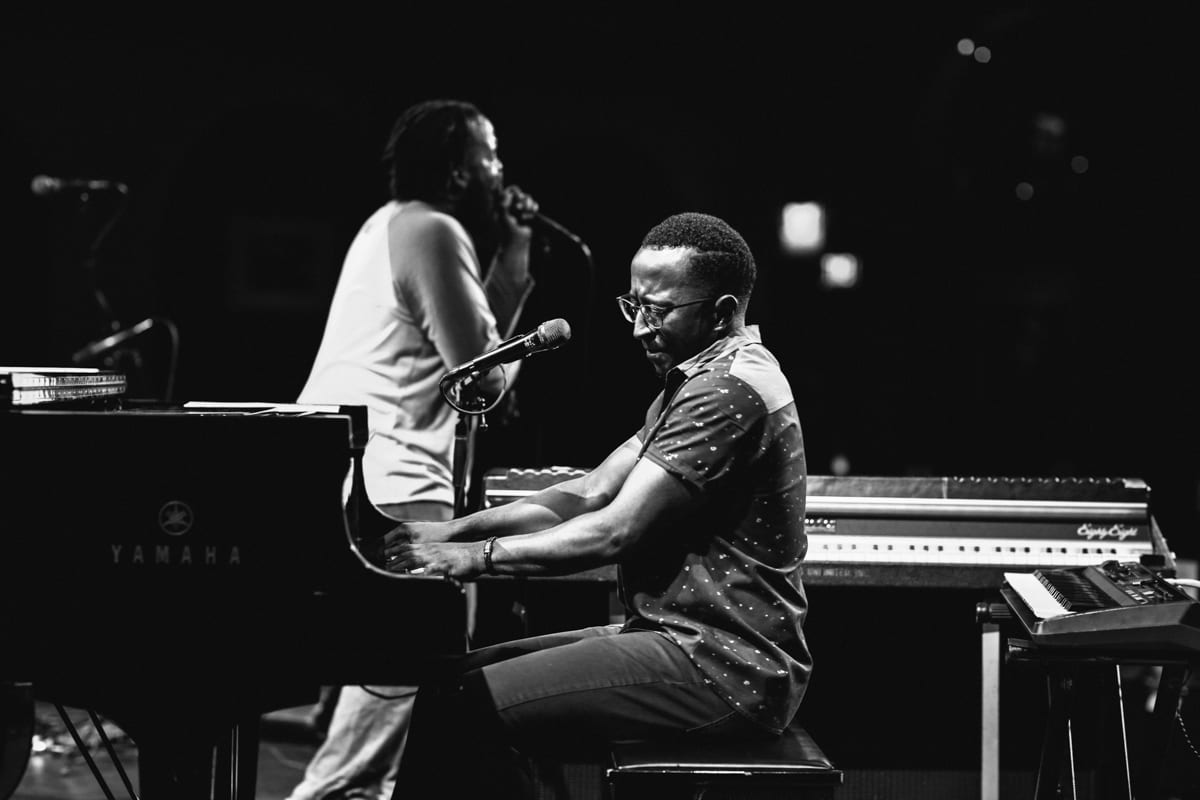 Before Croker’s set, keyboardist and vocalist Mark Meadows, a rising star in the D.C. scene, began the evening with a performance from his newest ensemble, the Movement, featuring music from their new, socially-minded album, To the People. The quintet is anchored by its core rhythm section, but it’s defined by the additions of John Lee on guitar and Deacon Izzy on vocals. Lee’s dirty tone channels the blues/rock influences of fusion greats like Frank Gambale and Hiram Bullock; Izzy is something of a partner frontman to Meadows, effusing earnest rap verses beside the pianist’s vocal hooks.

So the Movement’s sound is, at different times, hip-moving, foot-tapping, head-banging and soul-searching. The focus can change at a moment’s notice in order to serve Meadows and Izzy’s lyrical content, which centers on themes of injustice against Black America—an especially relevant theme in light of recent news. The band’s opening number, “A Chorus of Action,” opened in a rubato flurry of rich chord tones, funneling quickly into a complex jazz waltz that allowed Meadows to stretch his considerable chops as he moved through the quickly shifting chord changes. Then, after a blazing vamp solo by drummer Carroll “C.V.” Dashiell, the jazz groove dropped abruptly into a slow hip-hop beat. Izzy claimed his spot center stage, and the poetry began.

But it was another Izzy feature, “What Would You Do,” that truly held the room in rapture. Throughout the piece, Meadows, Dashiell and Lee worked to weave a dynamic texture, first taking the form of an aggressive volley of riffs, then a sparse, shimmering sheet of sound. As the band slowly increased its energy, Izzy’s verses soared out over the crowd, gripping listeners by their collars and pulling them in close. He was bringing us into a state of radical empathy for those celebrated and mourned in Meadows’ songs.

“Kick off your penny loafers / and take a walk in somebody’s shoes that thinks it’s over,” Izzy rapped. “When violence is your inner means to gain peace / And poppin’ on your enemies is how it be / When daddy is locked in penitentiary / Daddy’s baby to live with police brutality.”