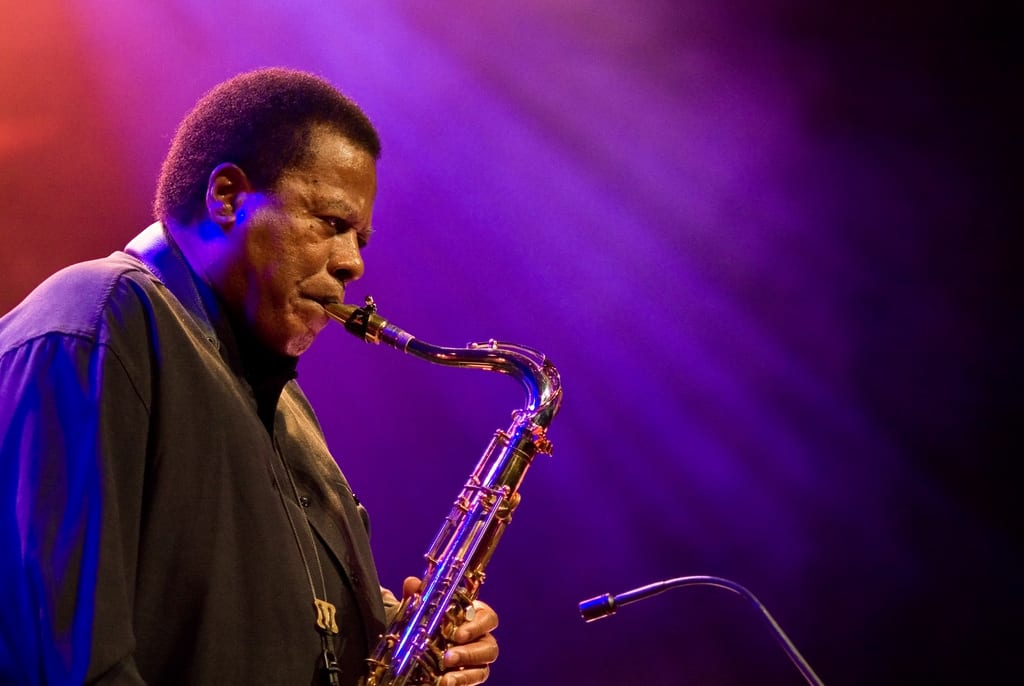 As many have said, “writing about music is a bit like dancing about architecture.” But somehow, somebody just wrote a breathtaking piece of music about the scientific theories explaining the universe’s creation. That someone is Wayne Shorter, among the most respected jazz musicians alive, and it’s hard to offer much in response to this latest feat, except awe.

Shorter, 83, returned to the Kennedy Center’s Eisenhower Theater on Saturday to premiere his newest orchestral jazz odyssey, “The Unfolding.” It is the tenor and soprano saxophonist’s 20-minute musical portrait of the Big Bang Theory, written for jazz quartet and 10-piece ensemble. It was given its name by Shorter’s good friends at the Stanford University Galaxy Formation & Cosmology Group.

With his always-formidable quartet — Danilo Perez on piano, John Patitucci on bass and Brian Blade on drums — backed by brass and winds, Shorter presented “The Unfolding” as the grand finale of a 90-minute concert. Even before he began the new piece, the show already felt like a lesson in musical astrophysics.

For those familiar with Shorter’s life and work, a piece like “The Unfolding” should come as no surprise. As a voracious reader of science fiction and a man whose expansive thinking can seem reminiscent of Siddhartha’s, he has always sought to push convention. Shorter’s music never reached the full-on unrestraint of his free jazz contemporaries like Ornette Coleman or Derek Bailey—but that’s only because he connects with the importance of gravity, in both music and the celestial sphere. With songs like “Orbits” and “Zero Gravity to the 10th Power,” Shorter feels that even without fully untethering himself musically, he can still explore the balance of freedom and control, gravity and order—and the possibilities that emerge in the space between those dichotomies.

The 70 minutes of music before the premiere served as an exploration of the scientific and musical ideas Shorter ultimately related in “The Unfolding.” The set also saw his quartet doing what it always does best: playing with textures. Listening to the four members’ playing, they were less interested in developing melodies or building harmonies as they were in exploring new ways to suggest color and tone. The four musicians played with rhythms, melodic clips, and even pronounced silence, creating a textured and often dissonant brand of post-bop. 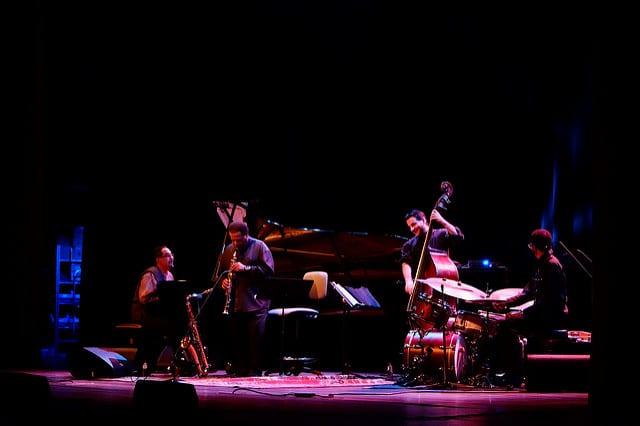 Take the opening number, “Zero Gravity to the 10th Power,” from the quartet’s 2013 release Without a Net. The pulsating, spiraling storm of music, conjuring visions of Lennie Tristano’s “Maelstrom,” gave Shorter few points to anchor down a melodic interjection. His tenor fought his quartet’s current to come to the surface. When it did, it sounded as if it was sputtering to life, gasping for the very first breaths of air and existence. While he breathed urgent life into the proceedings, Perez, Patitucci and Blade danced in a delicate interplay of sound and silence, light and shadow: matter and anti-matter.

The quartet pushed onward with only swift pauses for breath between the six tunes. Patitucci’s steady bass work guided us along on “She Moves through the Fair.” Perez’s piano created constellations of notes in “Prometheus Unbound.” Blade’s one-man orchestral dance on the “S.S. Golden Mean” conjured greater drama than a symphony’s full percussion section. Passages of discordant, primal chaos solidified into statements of pristine musicality and breathtaking beauty.

For all the directions that a piece about something like the Big Bang could take, Shorter chose to let the primordial strands swirl and synthesize in his quartet’s main set. In “The Unfolding” itself, Shorter celebrated less that initiating explosion and more of its ultimate after-effects: the continual expansion of the universe and the simple joy of existence.

To that end, “The Unfolding” was a fairly bright, bouncy and joyful turnaround, after the main set. The components of the piece made reference to the title, creating pockets and patches of musical development that unfolded into an illustrious, sky-like quilt by the 14 musicians on stage. But other times, acting as a near-titanic force, he would play something akin to a counter melody to push against the harmonic and dissonant boundaries of the ensemble. In either situation, Shorter’s improvisations would wind down to pre-defined ideas. He would then feed those to the ensemble, cuing the 13 other musicians onstage to the next passage.

Elsewhere, Shorter orchestrated moments that suggested a simple wonder at the radiance of the heavens. As the first swells of the piece faded away – the bang of creation passed – Danilo Perez’s twinkling notes of the piano sparked across the broad blanket of musical space created by the 10-piece ensemble. Later Shorter would find moments to bring particular voices to the front—often the oboe, bass clarinet and English horn, using the pronounced resonance of their reeds to create subtle overtones that suggested the emergence of life and light across the expanding cosmos.

If you look at pictures of those same cosmos, you will see a vast sea of black space. But you will also see stars, galaxies, nebulas—heavenly bodies radiating bright, resplendent colors. “The Unfolding” reveals a universe filled with light, life and joy. It gives you a sense of how one of the world’s most imaginative and generous artistic heroes sees the world—and it’s an invitation to adopt his gaze, one of awe and appreciation for all that is still unknown.