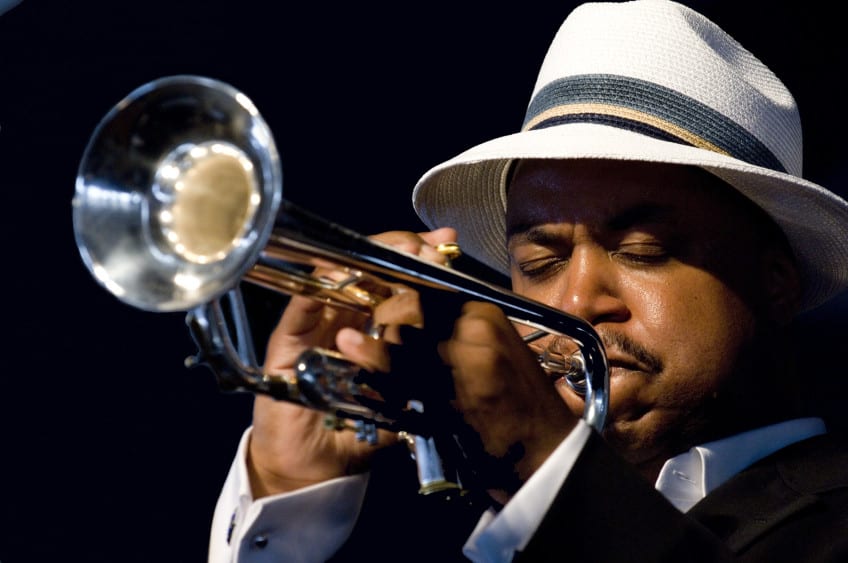 A few years ago, Nicholas Payton ginned up controversy in the easiest way possible: By speaking the straight and un-simple truth, with plenty of panache and defiance. He argued that jazz was an imposed (and, at least originally, degrading) title for a music that should simply be known as what it is: “Black American Music.” (Payton favors the abbreviated #BAM hashtag.) The devastatingly talented, New Orleans-bred trumpeter plays Friday and Saturday nights at Blues Alley with his trio, XXX. With that band he triples on trumpet, keyboards and vocals, though he’s more of a gifted amateur at the latter two.

When he plays with this trio, you can listen for the same elements that made his arguments around #BAM worth hearing: confidence, an expressive command of language (here that’ll be musical language), love for Black music across the spectrum. When he gets in trouble with XXX, it’s because of the same shortcomings that crippled his #BAM arguments: He can skew indulgent, he self-justifies beyond what’s needed, he proves the worthiness of his own worthiness when, really, we got it. If you can stand an overlong solo or two, and you like hearing a virtuoso at play in his wheelhouse, go to this show.

On Sunday night, Blues Alley follows Payton with something that’s just as assertive and just as righteous: the vocalist Alison Crockett, an under-appreciated local talent who most certainly plays her own form of #BAM. (Look out for our profile of Crockett, coming later today.) Across town, Akua Allrich brings her own tenacious, Diaspora-derived vocals to Bohemian Caverns on Friday and Saturday.

And at Twins Jazz, two strong area tenor saxophonists hold court: Jeff Antoniuk with his MARS 4tet on Friday and Saturday, and Bobby Muncy with his own four-piece on Sunday. As usual, all our favorite upcoming shows are shown in the calendar below. To see everything else as well, click on “tags” and remove the “CB PICK” selection.