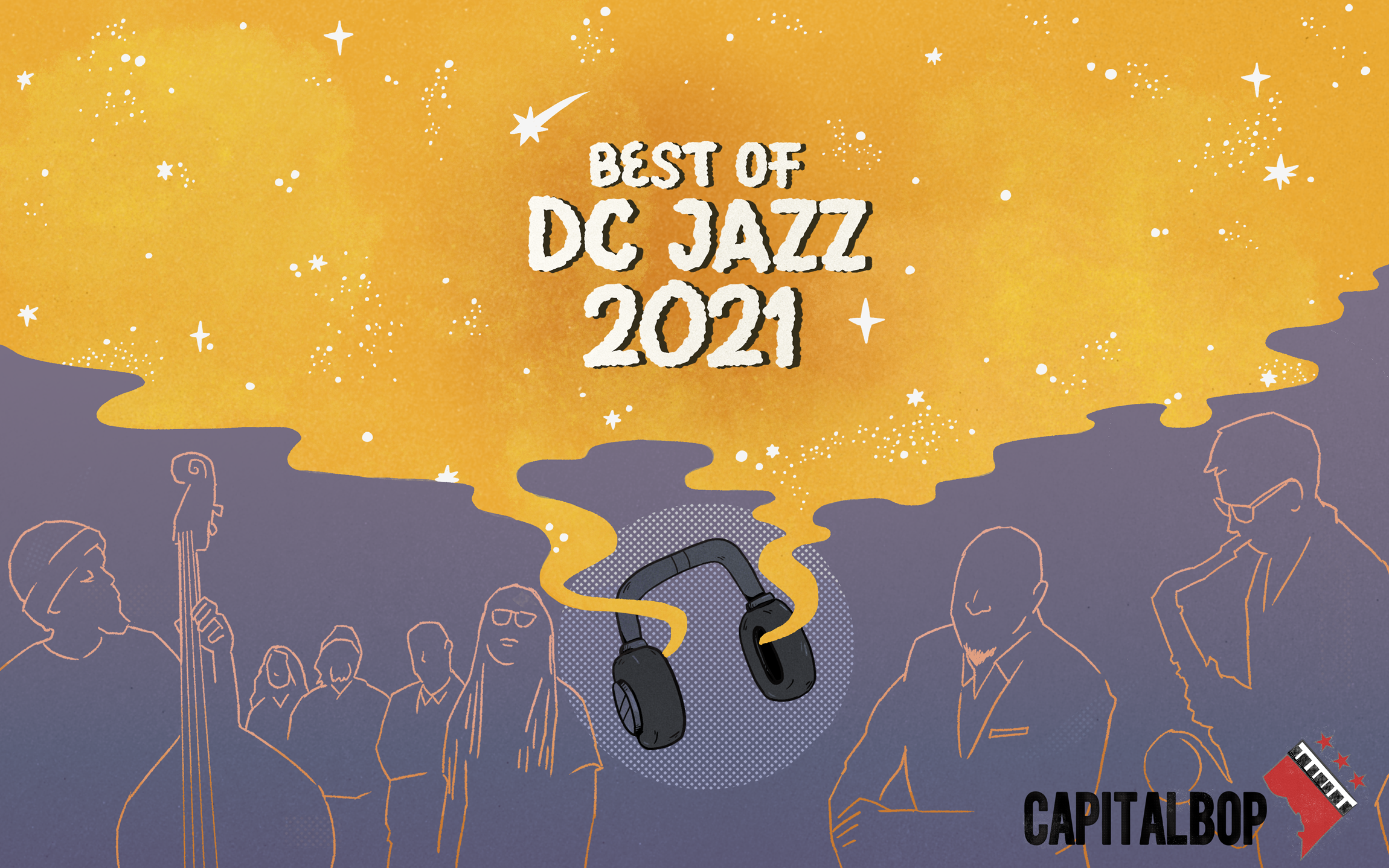 This has been a tough year, with just a few false starts of hope sprinkled in. We’re ending it much the same as we began: mostly in isolation, unsure of what’s to come. But throughout all of the difficulties we’ve continued to rely upon each other, especially on the D.C. music scene, where we’ve grieved for departed loved ones and elders, watched venues disappear, and adapted to a new level of dependency on technology.

Looking at the list below, you’ll see just how interwoven, interdependent and collaborative the D.C. jazz scene still is: In short, musicians had each other’s backs this year, just like they always have. And the albums listed below are evidence of that.

With so much great music being made in collaboration, this year’s best-D.C.-jazz vote was one of the tightest in CapitalBop history. The top-five list that we ended up with ranges from incendiary jazz-punk to sumptuous performances of ballads and standards — an example of the sonic diversity and deep well of talent that continue to define D.C. jazz.

The list that follows is unprecedented in a couple of ways. Spoiler alert, if you remember who won last year’s CB poll: For the first time since we started doing this ranking 10 years ago, we have a back-to-back No. 1 winner. And in another unprecedented feat, bassist Luke Stewart — who is also CapitalBop’s co-founder and director of presenting, but who didn’t vote in this poll — appears on three out of the five top albums, including two where he is a co-bandleader. We worked hard, as we always do, to make sure that the vote wasn’t beset by conflicts of interest; we also felt that it was important not to disqualify the vast creative contributions being made by one of our own teammates, particularly in light of how he’s being celebrated by national and international publications these days. The results of this poll only add to that growing consensus. (You can read more about the voting process and how we handled potential conflicts of interest at the bottom of this page.)

We’d invite you to read the full list, listen to all these great albums, and explore the “honorable mentions” as well. It was a tough year for all of us — but these recordings offer some light amid the darkness, and perhaps even some sense of direction. — Jackson Sinnenberg and Giovanni Russonello

Here is a true adventure in sinusoidal rhythmic exploration, taking the form of a conversation between sax and percussion of various kinds. Jarvis Earnshaw, on sitar and SP 404-esque digital reworkings, lays out an ambient resonance behind Devan Waldman’s tonally melodic flurries on alto saxophone; Luke Stewart’s layers on the bass have a percussive drive that sets the foundation for further polyrhythmic investigation by Ryan Sawyer’s light, fluent barrages. Together they make an extremely approachable album of fun and free playing.  — Allen Jones

Not since Mark G. Meadows released To The People five years ago has the D.C. jazz scene produced such a magnificent collection of explicit social-justice anthems and battle cries for the modern era as it has in Aaron Myers II’s The Pride Album. Myers delivers scorching invective against the modern failings of American society and politics, hand in hand with honey-sweet ballads and love songs that let you see the full yin and yang of his passion and his heart. Backed by some of D.C.’s best – Herb Scott on saxophone, Kris Funn on bass, Samuel Prather on keyboards, Dana Hawkins on drums and Stephen Arnold on guitar – Myers is able to speak to and for us all. — J.S.

Into Thin Air is an album of peace and, at times, even sensuality. It’s not loud, it is not overpowering. But, made by saxophonist Brad Linde in collaboration with an estimable cast of improvisers — Wendy Eisenberg on electric guitar and voice, Luke Stewart on bass, Allison Miller on drums and percussion, and Erika Dohi on piano, prepared piano, Rhodes, Wurlitzer and more — it’s an enjoyable journey down a newly paved musical road that seems to have no bumps or cracks, offering listeners an opportunity to ease their breath and tune in. — Jordannah Elizabeth

2. Mark Cisneros / Nik Francis / Luke Stewart, ‘We Were Here Before‘

Conceived as a memorial for the late, great Aaron Martin, Jr., We Were Here Before is a triumph, and a timely anchor for beauty-seekers in an age of disintegrating community and unmoored destiny. Six hands grip the wheel (two each from local masters Nik Francis, Luke Stewart, and Mark Cisneros), searching furtively in the dark for communion, steering the piece from discord, to unity, and discord again. Assuredness prevails, demanding rightful space for this music’s now and future belonging. — Abram Mamet

¡FIASCO!’s Post-Truth teleports listeners to a hauntingly abstract and timeless realm, with a soundtrack of genre-bending excellence. Post-Truth is the follow up to the band’s notable debut album, Arson. Here, ¡FIASCO! (Andrew Frankhouse on saxophone, Nelson Dougherty on guitar, Stephen Arnold on electric bass and Keith Butler Jr. on drums) has expanded on the textured storytelling and original compositions established on Arson, bringing forward the electro-acoustic pastiche of the first album into another heightened offering.

Each of the six tracks on Post-Truth renders a separate, distinctive chapter in this adventurous sonic tale. Among the brightest gems is the penultimate track, “Answerer,” which displays ¡FIASCO!’s ability to maintain intentional phrasing and well-spaced melodies amid the storm. Throughout Post-Truth, Frankhouse’s saxophone often seems to be relaying a wordless social commentary, urging further examination into the unknown. But every member of the group lends their own expertise across this well-balanced album.

Post-Truth is another otherworldly knockout for ¡FIASCO!. — Majeedah Johnson

Alex Hamburger, And She Spoke

The ranking above was compiled after a ranked-choice vote by a panel of seven CB contributors and close observers of the D.C. jazz scene, all of whom voted by secret ballot: Charvis Campbell, Jordannah Elizabeth, Majeedah Johnson, Allen Jones, Abram Mamet, Jamie Sandel and Jackson Sinnenberg. The ranking is an exact reflection of the tallied vote. Each album in the “honorable mentions” category received at least one vote from at least one panelist. Considering the interconnectedness of the District’s jazz scene, where any panelist had a direct conflict of interest related to a particular album under consideration, that panelist recused themselves from voting on it and other panelists’ votes for that album were weighted up to account for the smaller voting pool.