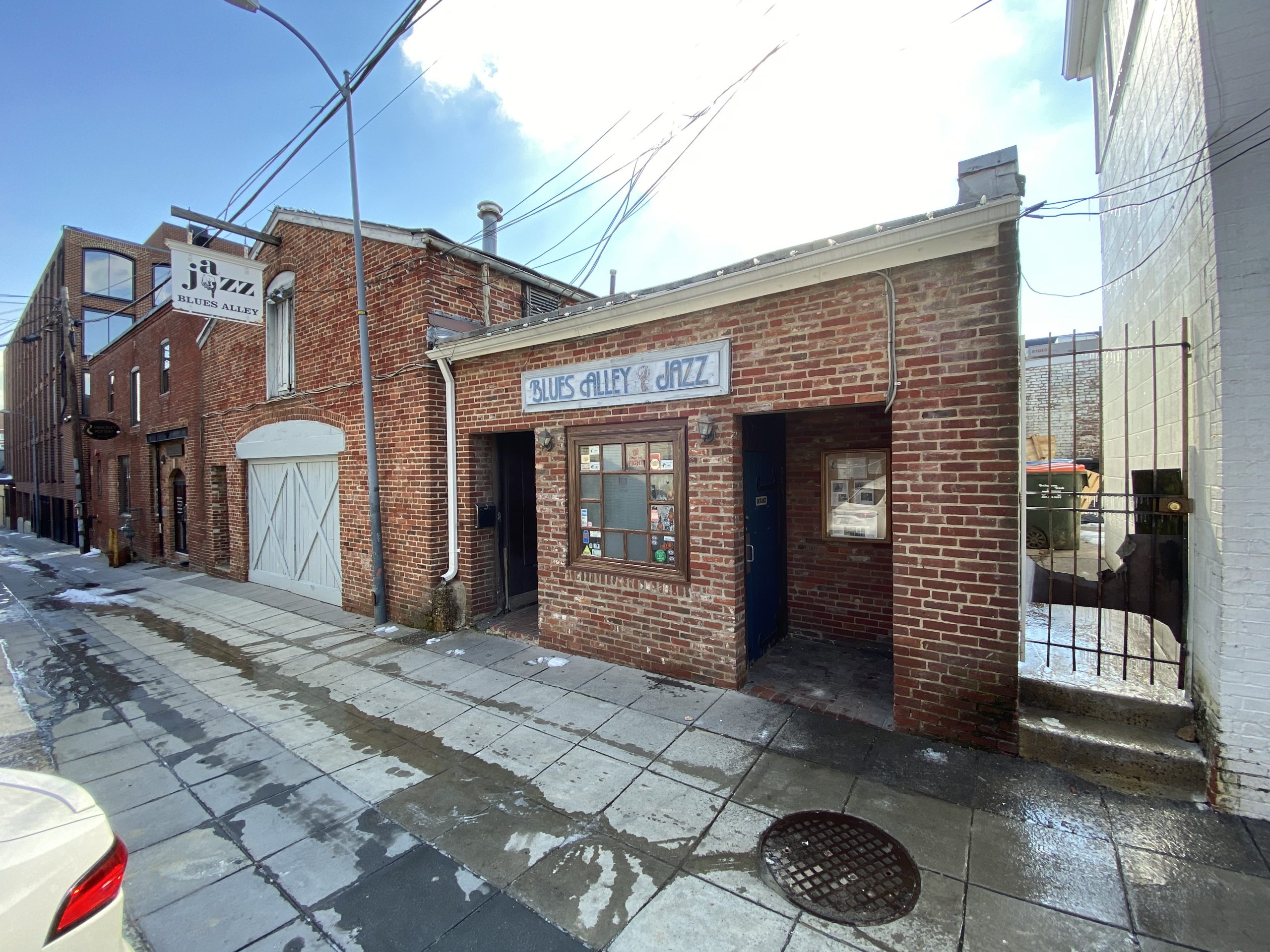 Blues Alley is the only full-time jazz club in D.C. that has survived the pandemic thus far. Its owners say that it may relocate after its lease expires next year. Abram Mamet/CapitalBop
News

This is the “and then there was one” moment for the D.C. jazz community: After a year of closures amid the coronavirus pandemic, Blues Alley is the only full-time jazz club left in town.

So the D.C. jazz community has been duly shaken over the past week by reports that the venue is looking to move out of the 18th-century brick carriage house that has been its home for more than five decades, as it grew into one of the country’s foremost jazz clubs.

But Blues Alley’s leadership told CapitalBop that they had no intention of closing for good, and that a move is far from certain. Instead, they are in the midst of negotiations as the club’s lease comes up for renewal.

Harry Schnipper, the club’s owner, declined to comment in detail about the status of his hunt for a new location, but he said that his lease is up in June 2022, and that he has been seeking a different home “for over a decade.”

“The simple truth is that our landlord refuses to sell us the building after 56 years of occupancy,” he wrote to CapitalBop in an email.

With the building changing ownership, Schnipper said the triple pressures of an expiring lease, the coronavirus shutdown and uncertainty about the future owners had led him to again contemplate a move.

Schnipper, who has owned Blues Alley since 2005, said that he did not want to make it “appear as though Blues Alley is going out of business.”

Asked in a separate phone interview if he planned to continue operations in the Georgetown location as soon as social-distancing restrictions are lifted, he said that “the simple answer is yes.”

Blues Alley has been in its Georgetown space for its entire half-century of existence, weathering waves of citywight neglect, violence and then gentrification to become one of the world’s premier spaces for jazz.

This news of Blues Alley’s most recent flirtation with a move was first reported last week by NBC 4 Washington. The virtual jazz community reacted with a mix of outrage and distress.

“I played in this club so many times over the years; it was one of my favorite jazz clubs in the US; it’s sad news,” the legendary trumpeter Arturo Sandoval tweeted shortly after the news broke.

“I can’t believe the news that the iconic location of Blues Alley will no longer be,” saxophonist Herb Scott wrote in a public Facebook post.

Nearly every establishment that regularly hosted jazz in D.C. has closed in the past year, as the coronavirus has forced a shutdown of entertainment venues. Public aid for venues — especially for-profit ones — has proved scarce. D.C.’s current operational guidelines prohibit all forms of live entertainment at restaurants and bars, and Blues Alley and other clubs have remained closed to in-person attendees since March 2020.

“The operative word here is closed, not closing,” Schnipper said by phone. “People have leapt to the conclusion that we are closing.”

NBC 4 reported that the building was for sale, which Schnipper confirmed to CapitalBop. But over the past week and a half, the owner of the property has not responded to multiple requests by CapitalBop for comment, and the building’s sale has not yet been listed to the general public.

While the club’s fate is far from sealed, Schnipper and Kris Ross, the club’s operations director and talent buyer, both told CapitalBop that there was little that the larger jazz community could do to keep the venue in Georgetown. “Aside from the current landlord, or someone purchasing and giving an extreme reduction in rent for a significant amount of time,” Ross said in an email, there is “not much” that can be done to keep the club in its current location.

Further complicating Blues Alley’s efforts to remain in its longtime Georgetown home are the opaque laws surrounding commercial lessees’ rights. Blues Alley’s lease runs through June of next year, and it remains unclear what would happen if the building were to be sold before the lease expired.

Vocalist Steve Washington, who has performed at Blues Alley many times throughout his career and also works as a realtor, said the situation would conform to the old adage that “everything is negotiable.” All three parties — the seller, the incoming building owner and the lessee (Blues Alley, in this case) — would have to come to an agreement, Washington said.

However, he also noted that if Blues Alley wanted to stay in the Georgetown space through the end of its lease, Schnipper would likely be able to do so. “If the current commercial tenant is very defensive of that lease, and insists on having that lease active through the course of those lease terms, then I would think that that is something that the seller, and the owner, would abide by,” he said.

Though the pandemic has certainly added to the club’s financial strain, Blues Alley has long been “headed for a cliff,” Ross said.

Ross, who had worked at the club since 1990, told CapitalBop in an email that with rents steadily rising over the years, Blues Alley “almost needed a nightly sell-out to cover daily operating costs.”

In 2007, Schnipper threatened to move Blues Alley amid rising taxes and increasing rents. Eventually, he and Snyder Properties reached an agreement, and the club remained open. In 2013, Schnipper teamed up with Jack Evans, then the D.C. Council member from Ward 2, to introduce a bill that would provide generous tax breaks to the club. It never passed. That same year, Schnipper told the Washington Business Journal that he was engaged in efforts to relocate, or possibly expand elsewhere in the D.C. region. Ultimately, he did not.

Blues Alley opened in 1965 as a Dixieland-style venue run by clarinetist Tommy Gwaltny, fitting into the counterculture that was then thriving in Georgetown. After the club was sold to John Bunyan in 1973, it adopted more of a supper-club atmosphere and began showcasing some of the leading jazz talent, drawn from both the national and local scenes.

Artists like Dizzy Gillespie, Ahmad Jamal and Wynton Marsalis played there regularly. Under Bunyan, the club’s brand grew, and Blues Alley became both a nonprofit and a (short-lived) franchise with locations in Baltimore and Tokyo. Bunyan sold Schnipper the club in 2003 after years of transition. Bunyan died on Feb. 6, according to Ross, who is Bunyan’s stepson.

Under the leadership of Schnipper, who brought to bear his background in commercial real estate, the club was able to navigate the rising rents and economic hardships of the early 2000s in D.C.

Today, after the mid-pandemic closures of Alice’s Jazz and Cultural Society and Twins Jazz, Blues Alley is the last traditional jazz club remaining in the District.

But Schnipper said that even if the club does leave Georgetown, Blues Alley as an institution will live on. He said his team has remained busy during the pandemic. “Man, I’m in the process right now of doing the music component of the National Cherry Blossom Festival, I just finished up a project with the Voice of America, we’re creating a consortium between six separate jazz clubs and scholars … and we’re launching a global virtual jazz festival on March 20,” he said. “I’m planning the fourth annual Ella Fitzgerald International Jazz Vocal Competition on April 24 at the National Press Club. I mean, I’ve got so many projects in the pipeline. I don’t see that Blues Alley is out of business.”