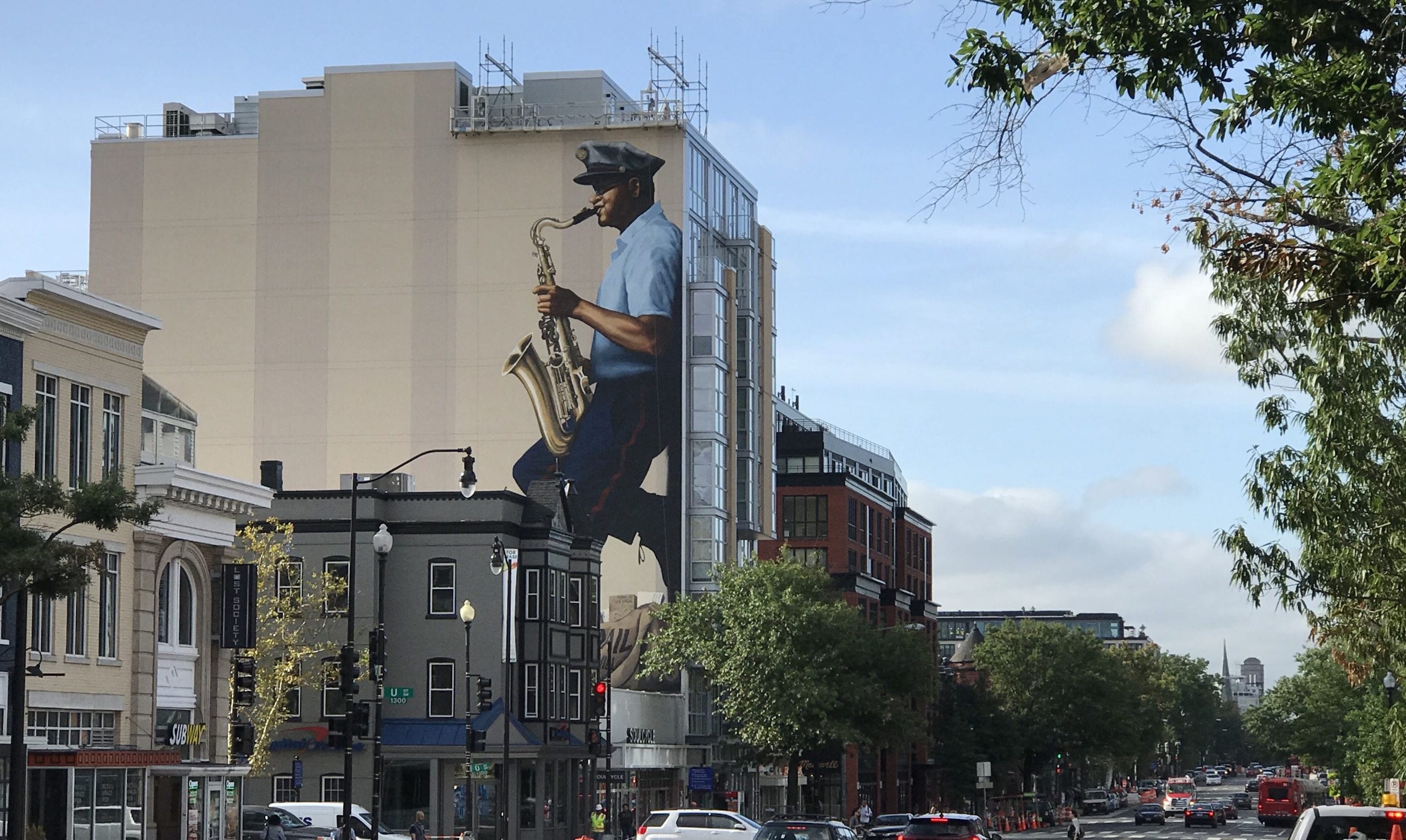 This new painting of Buck Hill is the largest mural in D.C. honoring an individual figure, according to the city. Courtesy MuralsDC / DC DPW
News

A new mural near the corner of 14th and U Streets NW features a 70-foot-high portrait of a postman playing a saxophone, leaning nonchalantly against a wall. It is a towering tribute to a figure who rarely sought the spotlight — but who ended up becoming a DMV legend anyway.

The man is Buck Hill, widely known as “the wailin’ mailman,” who for half a century doubled as a renowned jazz saxophonist and a daily-mail carrier in his hometown. The artwork is now the tallest mural in D.C. paying tribute to any individual figure, according to Nancee Lyons, a spokesperson for the D.C. Department of Public Works.

It was officially unveiled on Tuesday at noon, in a ceremony at the corner of 14th and U. A range of speakers — from jazz musicians to a representative of the postal workers’ union — addressed a crowd of roughly 60 people. A jazz trio also performed, featuring vocalist Donald Tillery, pianist Terry Marshall and drummer Earl Ivey.

MuralsDC, a collaborative project by the D.C. DPR and the D.C. Commission on the Arts and Humanities, sponsored the creation of the mural.

The Arizona-based muralist Joe Pagac was hired to create a piece at the 14th St. location, but MuralsDC allowed him to choose the subject. Pagac consulted with the Georgetown University history professor Maurice Jackson before settling on Hill, who seemed appropriate given the U Street corridor’s history as the heart-center of D.C.’s jazz community. (Go-go legend Chuck Brown was also considered as an option, Lyons said, but his visage can already be seen in multiple murals across the city.)

Today, the corner of 14th and U remains a locus point for D.C. music culture. This spring it was the site of massive protest concerts, when the #DontMuteDC movement arose to push back against the silencing of go-go musicians — and against gentrification writ large.

At Tuesday’s ceremony, several elders in the D.C. jazz community spoke, including Rusty Hassan, a scholar, educator and longtime radio host; Davey Yarborough, the recently retired head of jazz studies at the Duke Ellington School of the Arts; and Rev. Sandra Butler-Truesdale, a DJ, author and advocate for D.C. music history. Other speakers included Brian Renfroe, the executive vice president of the National Association of Letter Carriers; Chris Geldart, the director of the D.C. DPR; and Pagac.

The ceremony’s context also threw a light on some painful realities in the neighborhood where the mural was created. Hill’s image is a clear callback to the years when D.C. was widely known as Chocolate City, and when U Street was a bustling incubator of Black culture. While elements of U Street’s rich history remain intact, the corridor has been aggressively gentrified, with property costs skyrocketing and luxury apartments and condominiums springing up. “As much as I love seeing Buck on that wall, I’d love to see some affordable housing so people who look like him could live here,” Butler-Truesdale said in her remarks, according to the WAMU reporter Mikaela Lefrak.

The mural itself adorns the side of Elysium Fourteen, a shiny new apartment complex located above a SoulCycle and Lululemon store.

I’m at the dedication of DC’s new Buck Hill mural and the guy next to me just said, “It’s been a minute since I’ve seen this many black people at 14th and U.” The neighborhood’s certainly changed a lot since Hill’s time. pic.twitter.com/CIQvTEhWxi

Cognitive dissonance aside, there’s little doubt that the subject of the mural deserves a grand public homage, or that the U Street corridor is an appropriate place for it.

Buck Hill was born in Northeast D.C. in 1927, and first picked up the saxophone at age 13. His first gigs, when he was 16, came alongside his high-school friend Jimmy Cobb, who would go on to achieve fame as part of Miles Davis’ sextet. Unlike Cobb, though, Hill opted to remain on home turf.

In the late 1950s, Hill sat in with Davis, filling a spot that had been held by John Coltrane. Davis offered Hill a spot on his next tour, but Hill declined. “I felt if I went to New York I could play,” he told the Washington Post in 1980. “But I didn’t see how I could do that with a family. I had children to support.”

By the time of his encounter with Davis, he had already settled into his job at the U.S. Postal Service, where he would remain until 1998. Throughout that time, he kept up his craft, and would often arrive at work before dawn so he could practice his horn before the day began.

Muralist Joe Pagac, center, poses with members of the Hill family in front of his painting of Buck Hill. Courtesy MuralsDC / DC DPW

By night, he cast an imposing figure on stages across the city. Saxophonists visiting D.C. were often surprised to find themselves outmatched at late-night jam sessions by a musician that many of them had never heard of.

His star rose internationally in the 1970s and ’80s, when he recorded several well-received albums for the SteepleChase and Muse labels. After retiring from the post office, he spent his final decades playing here and there in clubs around D.C.

“Buck did not like to travel,” drummer Nasar Abadey told The Washington Post in 2013, after Hill died. “He did not like a lot of attention. He just wanted to plant his feet and play the music.”