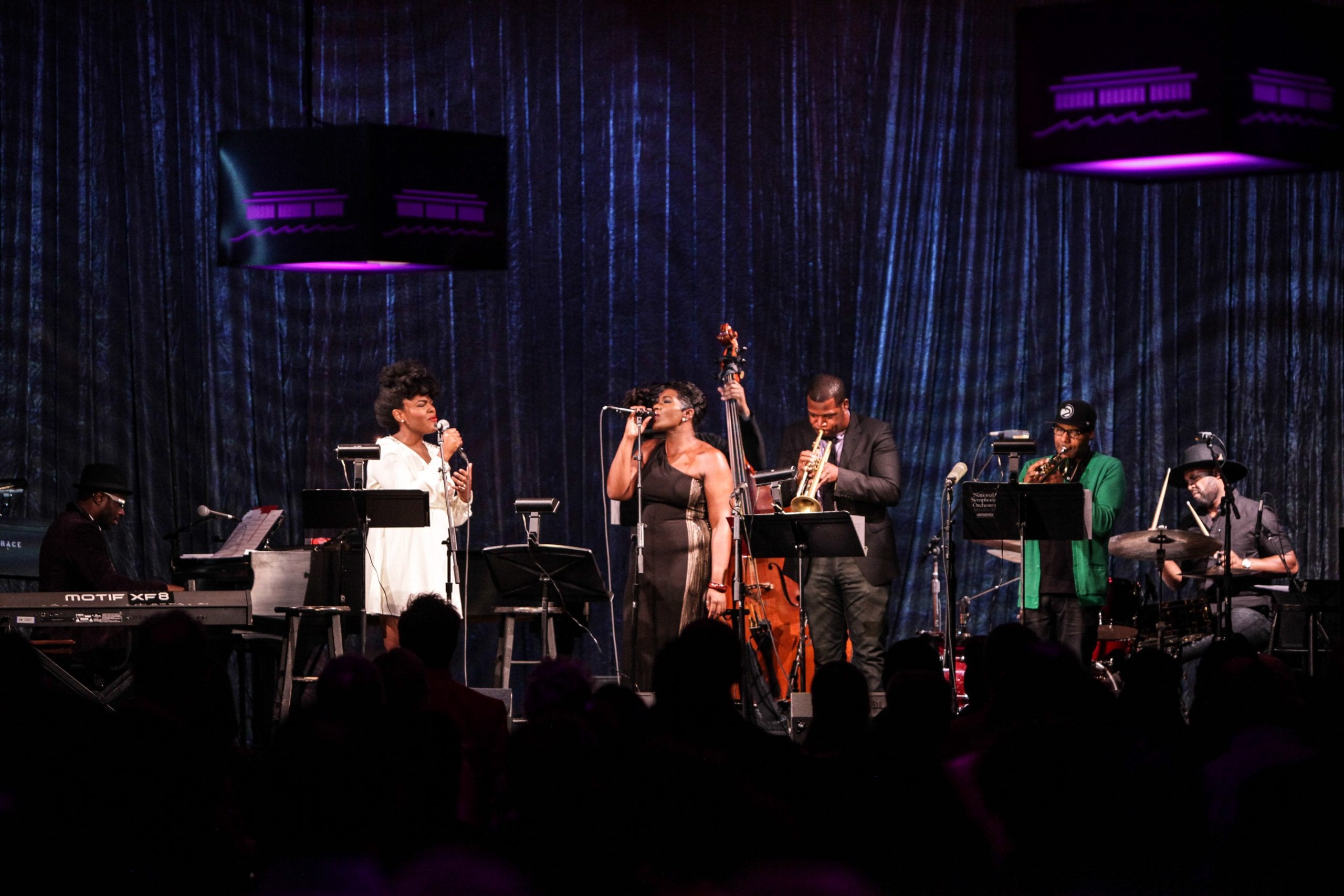 Ray Angry, far left, got the most out of every musician in his band at a recent concert presented by Revive Music Group. Courtesy Jati Lindsay
Live reviews

Ray Angry is a mad scientist. A mastermind in every sense of the word. His reach extends further than the tips of his fingers, coloring the world around him. That was on full display on Saturday, Oct. 24, when the pianist brought a seven-piece ensemble to the Kennedy Center’s Crossroads Club to perform a program titled Sarah Vaughan with Clifford Brown Reimagined, a fabulous ode to two legendary jazz musicians presented in partnership with the Revive Music Group.

Trumpeter Clifford Brown and vocalist Sarah Vaughan paired up to record Sarah Vaughan with Clifford Brown in 1954. The album went on to be inducted in the Grammy Hall of Fame in 1999 and is considered one of the iconic records in jazz history. Revive—a 10-year-old, New York-based organization dedicated to championing a genre-bending approach to contemporary jazz—chose Ray Angry to be the musical director leading its efforts to present a more contemporary take on the project.

Angry assembled a tour de force of an ensemble, featuring Howard University alum and vocalist Christie Dashiell alongside another talented female singer, Kennedy, plus trumpeters Keyon Harold and Russell Gunn, drummer Kendrick Scott and bassist Burniss Earl Travis II. Angry, also a Howard alum, has been a regular presence behind the pop music curtains for the past 10-plus years, arranging for artists like Lauryn Hill, The Roots, Joss Stone and Mick Jagger.

He’s probably learned a lot from the experiences: At the Kennedy Center, his masterful ability to draw the most out of an organic stew of talent and his knack for passionate arrangements were fully on display. There was an undercurrent of competitiveness that came along with pairing two vocalists, Kennedy and Dashiell, and two trumpeters, Harold and Gunn. It almost made you feel compelled to choose favorites. But each artist served as a beautiful stroke within a complete painting, all contributing uniquely to an outstanding performance.

Ray Angry has a very distinguished history in music. At 18, he was sitting in on the piano at jazz clubs with the great Wynton Marsalis, and being mentored by Mulgrew Miller. As a classical piano major at Howard University, he studied under highly acclaimed pianist Geri Allen, a connection that spurred his interest in taking up jazz. Since then he has acquired a world of credits, and received a Grammy for his work on The Roots’ album Undun. Recently Angry has begun performing more often with his own projects, including his Celebration of Life Suite; as musical director of the Sarah Vaughn and Clifford Brown project, Angry displayed a great sense of intuition and artistic vision, and proved why he was the perfect choice to bring it all together.

The set began with a take on the standard “What Is This Thing Called Love.” Angry transformed it into to a rumbling and thunderous arrangement that crashed and railed like a New York City subway. He comped with percussive accents, complementing the roaring solos from Harold and Gunn. Angry’s comping style ranged from aggressive to sweetly surrendering, at some moments conjuring an axe striking wood, and others a ribbon adorning a child’s hair.

He introduced Dashiell on the third tune, “You’re Not That Kinda Guy,” and her vocals were crisp and fine like flower petals or satin sheets. Harold’s muted, melodious soloing added warmth to the tune and he never missed a beat. His improvisation was almost sing-able. Dashiell really dug in on “September,” a thumping soul tune which featured Angry on the organ. Her vocals were impeccably controlled and spilling with church and soul: a performance that certainly hit the listener in the gut.

We were introduced to Kennedy on “April in Paris;” Angry’s arrangement of the classic standard sounded very close to Michael Jackson’s  “I Can’t Help It.” Kennedy gave a charismatic performance: Her tone was rich and her vocals exhibited a rasp that felt almost perfectly equipped for rock, but still fit so well. A skilled “scat” vocalist, she joked around with attempting to have the audience mimic her improvised lines. We failed miserably to keep up.

But the ensemble’s shining moment came at the end on “He’s My Guy,” a head-to-head battle between Dashiell and Kennedy with the vocalists quarreling over a man they had been both seeing. The interplay reminded me of Brandy and Monica’s “The Boy is Mine,” and Keyon Harold played the role as the scandalous “player” caught in the middle. He released a mocking “na-na-na boo-boo” on his horn and the competition heated up between Kennedy and Dashiell, and suddenly we realized it wasn’t about two women fighting over a guy, but two expert vocalists with very different styles engaged in a friendly competition for the audience’s affection. I didn’t want to choose who was winning, but I found myself rooting for both at different moments as they sparred back and forth.

The story became more complex as Russell Gunn jumped into the mix, playing the part of yet another guy involved in this love epic. Gunn and Harold challenged each other head-on, Harold playing smooth melodious licks while Gunn shot back from an “alpha male” posture, charging with rapid, hard-hitting solo lines. I wondered if this was the dynamic that Angry had been trying to execute by pairing these unique musicians with each other. Each one was equipped with specific strengths and skills that I might have thought at first the other lacked. But that was the genius of it all: Together, they were like The Avengers of jazz, each gifted with their own talent. When put together by the right maestro, they became a force to be reckoned with, even greater than their sum.