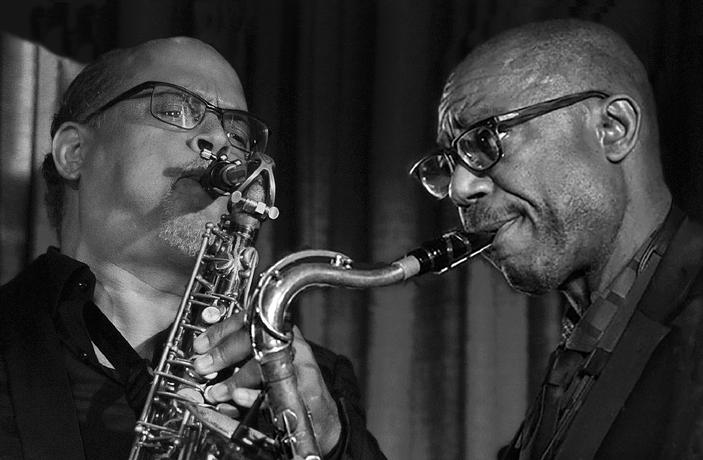 The Paul Carr/Marshall Keys Quintet will perform a tribute to Dexter Gordon on Friday at Westminster Presbyterian Church. Courtesy Phillips Collection
The Month in Shows

As I was looking over the calendar this month, I was reminded that nearly a year ago – after six months of uneasy but joyously resurgent, in-person live jazz in the nation’s capital – the Omicron variant of the coronavirus swept through the East Coast. Gigs were canceled as Christmas approached, leaving the end of 2021 to feel a lot less merry and bright, and more like the gloomy 2020.

We’re certainly not Covid-free, but the end of 2022 seems to hold a far more optimistic outlook for creative music in this city. After a lot of sacrifice and continued diligence for public health, the D.C. jazz scene is as bustling and hustling as it can be. So let’s take some time this month to reflect on the small victories that led us here, and the larger victories for the scene, before we buckle down to continue to fight and advocate for space for jazz in the DMV next year.

In another cause for celebration, our dear brother Warren “Trae” Crudup has returned to the scene after a couple years out of town. He’s already back to hosting an ultra-hip, grooving session at Harlot D.C. on Wednesday nights. A rare late-night, weekday hang, this new session kicks off at 11:30 p.m. Night owls are encouraged to pull up!

December is usually a feast for music lovers in D.C., and this month is no exception. Read our five picks for the top one-off shows happening this month, and head over to our D.C. jazz calendar for the rest of this month’s gigs, especially the glut of holiday programming.

Season’s greetings and blessings to you and yours. See you in the new year.

Saxophonists Marshall Keys and Paul Carr are two of the great fixtures of the D.C. jazz scene. When Carr, a powerful tenorman and veteran educator, and Keys — an alto player as comfortable swinging on blues and bebop as he is digging into fusion — come together, their combined force fronting a band is awesome to hear.

Pianist Erika Dohi may be best-known to D.C. audiences for her nearly decade-long association with the enterprising saxophonist Brad Linde, playing in several of his various projects. But she’s also played with great masters of creative music, like Wadada Leo Smith (she’s recently been in the maestro’s Golden Quartet).

She returns to D.C. to pair up with Linde again and perform pieces from her album I, Castorpollux. The album’s tracks all have an aching, tragic feel to them, with simply gorgeous melodies written by Dohi.

Trinidadian trumpeter and percussionist Etienne Charles emphasizes his Afro-Caribbean background in his music, performing sizzling originals and arrangements of standards that ride between calypso, Voodoo music traditions, and the carnival grooves of his birthplace. When he’s not leading the band from behind a pair of congas, he belts out bubbly, bright melodies on the trumpet. Here, he performs a Christmas program for the holidays, drawing material from his album Creole Christmas.

Jason Moran has not only guided the Kennedy Center’s jazz programming for the last decade, but has also deeply influenced directions in the music writ large over his career. His haunting solo piano works are pristinely delicate and beautiful. His working band, The Bandwagon, always charges with a fearsome groove. He often collaborates with old masters like Archie Shepp and, before that, the late Sam Rivers. His writing, too, is in demand, from his operas to his tributes to Monk, Fats Waller and more.

Here, he joins forces with a fellow luminary of his generation, bassist Christian McBride, who’s something of a standard-bearer for the upright bass in jazz these days. His tone is hammering but not overpowering, precise but loose, and his name has been on countless recordings by some of the greatest practitioners of the tradition over the last 30 years. What will happen when these two come together? Who knows? But it’s likely to wow and amaze.

Just like the Bohemian Caverns Jazz Orchestra’s annual Christmas tradition, there has been a definite gap these last three years in the D.C. jazz scene without Ben Williams’ annual holiday celebration at The Hamilton, which will return this month for the first time since its 2020 iteration was cancelled due to the coronavirus. Williams, a renowned bassist and composer, is one of the District’s star exports, often appearing on bandstands with New York City’s elite like Pat Metheny, Terence Blanchard and Stefon Harris. All of Williams’ music as a bandleader is clearly shaped by the contemporary modern jazz world he plays in, and his facility and confidence on both upright and electric basses are impressive. Williams celebrates his birthday – and the holidays – in his hometown every year with this tradition.

Some picks based on old listing text written by Giovanni Russonello