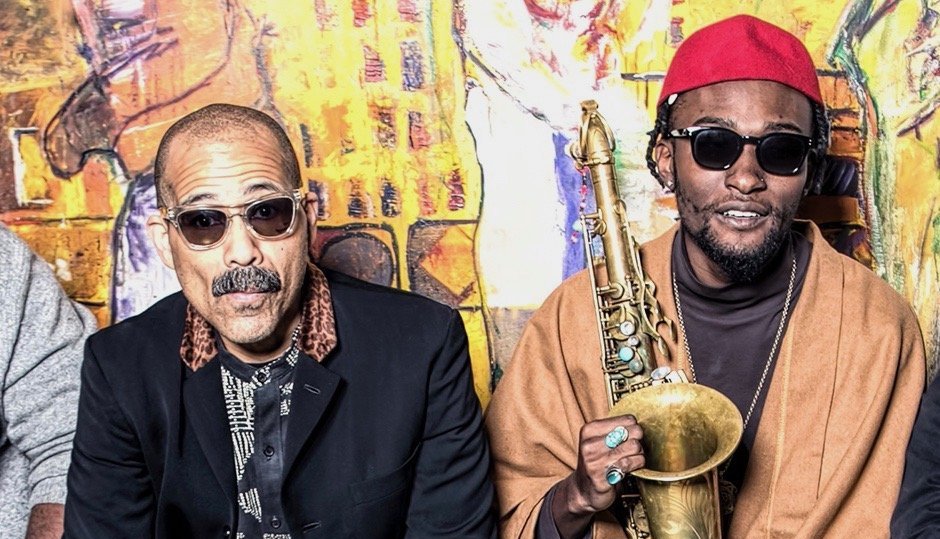 Kahil El'Zabar and Isaiah Collier will perform a tribute to John Coltrane and Elvin Jones on Sep. 26 at Rhizome DC. Courtesy rhizomedc.org
The Month in Shows

The running theme of this column tends to be: “There is a lot of great music happening in D.C. this month, and here’s a fraction of some of the best of it that I think you’ll enjoy.” So, bear that in mind when I say that this particular month might be the most exciting one for music in the DMV since I started writing this column in 2019. The DC JazzFest, which started the month off with a bang, is already behind us. Now, we can look forward to the Rosslyn Jazz Festival in Northern Virginia this coming weekend, CapitalBop’s own NEXTfest on Sep. 24 and 25, and an overflowing schedule of shows at venues all over the city. In truth, I’d need at least three different “5 picks” columns to round up my tip-top picks for this month.

But let’s stick to protocol, shall we? When I say these are my “top five” choices for September 2022, just take it with a grain of salt.

Some notes for what didn’t make the cut: A great pair of Baltimoreans – bass clarinetist Todd Marcus and trumpeter Sean Jones (the head honcho for jazz over at the Peabody Institute) – bring together a rather new quartet for what’s going to be a dynamite performance at Takoma Station on Sep. 10. Fela Kuti’s youngest son, Seun, leads his father’s dynamite backing band Egypt 80 at City Winery on Sep. 16, in a show that’s sure to be overflowing with spiritual and physical uplift. And pianist Benito Gonzalez, a one-time fixture at Twins, brings his McCoy Tyner tribute to Blues Alley on Sep. 24.

One housekeeping note for all you Blues Alley-goers out there: After decades of having its two nightly sets begin at 8 and 10 p.m., the shows now start at 7 and 9 p.m., effective Sep. 7.

The shows mentioned above, and the five picks that follow, are highlights — but check out our jam-packed D.C. jazz calendar for all the other shows and streams occurring in the area.

I also want to take a small moment to acknowledge the passing of jaimie branch from this realm. She was a singular sonic explorer and visionary (who frequently enlisted the vision and aid of our own Luke Stewart in her works). She will be dearly missed.

Sharón Clark belts Great American Songbook standards, and brings to bear decades of experience, having toured the world several times over. She can sing a Kansas City blues like she was born there, bring gospel devotion to a club setting, and deliver a great deal of emotional depth to the standards. She typically appears with pianist Chris Grasso, and for this date the pair will perform at D.C.’s jazz church  with a strong band: Paul Carr on saxophone, Zach Pride on bass and Lenny Robinson on drums.

Saxophonist Elijah Jamal Balbed was born and raised in Silver Spring and is a consummate student of the D.C. music scene: He’s equally comfortable blowing some burnished, buoyant hard-bop as he is grooving in the pocket of a go-go band. He can often be found leading groups featuring some of the other young statesmen of D.C. jazz, through originals and standards that swing just right.

He continues his monthly residency at Takoma Station with the Beltway Horns: Greg Boyer on trombone and Brad Clements on trumpet. The trio plays around the DMV, and with the likes of Sheila E. Between the three of them, they boast decades of experience playing with a huge range of Black American Music legends, like Prince, George Clinton, Chuck Brown and more.

Drummer and producer Nate Smith spent the better part of his career thus far backing some of the most impressive names on the New York scene, like the prolific trumpeter Dave Douglas and the versatile saxophonist Chris Potter.

With his project KINFOLK, Smith weaves sounds, shapes and stories from across the country and across the popular music spectrum. It’s “jazz” yes, but inflected with a vernacular rooted in Prince, ’90s slow jams and easygoing, Sunday-afternoon soul — just as much as Kenny Garrett or John Coltrane.

Since winning both the Thelonious Monk International Jazz Competition and Carmine Caruso International Jazz Trumpet Solo Competition in 2007, Ambrose Akinmusire has been an essential thread in the fabric of modern jazz. Each of his five albums for Blue Note Records has seen him pushing the bounds of post-bop jazz, from the hypnotic swirl of A Rift in Decorum to the scorching, twisting tones of his most recent LP, the self-described “blues” of On the Tender Spot of Every Calloused Moment. On the way, he’s played with a multitude of fellow stars — from Jason Moran and Wolfgang Muthspiel to Mary Halvorson and Kendrick Lamar (you can hear his clear, testifying trumpet on To Pimp a Butterfly), as well as in the new creative trio Trefoil, featuring Kris Davis and Gerald Cleaver. His tone is often haunting, sometimes cowering, frequently uplifting and always commanding — sometimes all at once.

Chicago’s Kahil El’Zabar is one of those true forces for good in the world. A percussionist, composer, vocalist and bandleader – as well as a former president of the Association for the Advancement of Creative Musicians (AACM) – El’Zabar has been associated with free and creative music for decades, but his music aligns with the kind of spiritually centered records made by Pharoah Sanders and Archie Shepp in the late 1960s and early 1970s. His Ritual Trio and Ethnic Heritage Ensemble have often featured icons of creative music and the AACM, like Sanders, David Murray, Malachi Flavors and others.

He pairs here with Isaiah Collier, a 24-year-old saxophonist — also from Chicago — making cosmic music and big waves in the creative world. Together they will perform a tribute to the deep partnership between John Coltrane and Elvin Jones. There will be two sets, each covering a different phase of Coltrane and Jones’ creative relationship. The two will focus on the years 1961-1963 at 7 p.m., and 1964-1966 at 8:30 p.m. The second set will take place outdoors.