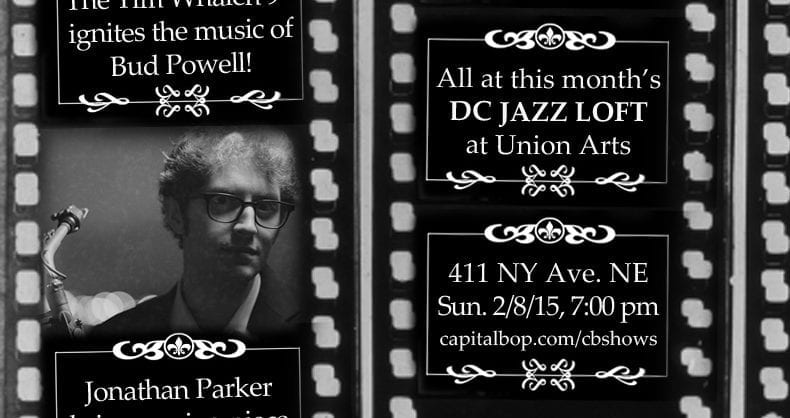 Last month the loft got subsumed under The Preparation, our three-night festival of creative music. The month before that, we set out on our first-ever Traveling Loft. It’s been a while since we had a good, old-fashioned DC Jazz Loft: Three bands, passing spirits and sounds around up on the third floor at Union Arts.

This month we’re bringing things back home with a night of music featuring three of the District’s brightest young performers and composers. Mark Meadows is the leader of Somethin’ Good, a potent small ensemble that can swing its butt off or draw new dimensions out of a Michael Jackson cover. (The band’s 2014 debut album earned a good review in legendary DownBeat Magazine.) Then there’s Tim Whalen, a rigorous arranger whose new album features his takes on the music of famous bebop founding father Bud Powell. And make sure you arrive close to the top of the program so you can catch Jonathan Parker, a dazzling young alto saxophonist who will be performing his compositions with a nine-piece band–yup, that’s right: nine!

You can find Union Arts at 411 New York Ave. NE. Just pull into the alley behind the building (just off Penn Street) and use the back entrance. We suggest a $15 donation, as always, which goes entirely to the musicians. Things will get started at 7 p.m., and the music will go until about 11 p.m. And if you’re a musician, bring your axe so we can try to fend off the night’s end with a jam session.

Mark Meadows has matured into one of the more exciting young pianists in the Baltimore-Washington region. He’s adeptly tapped into the area’s rich straight-ahead jazz tradition and culture, performing with some of its foremost talents, such as Warren Wolf and Kris Funn. Recently he released Somethin’ Good, a debut recording that cements his place as a major creative force in the area’s jazz community, with an eye toward the wider music industry. Likewise, he can please a crowd of jazz aficionados while also reaching newer audiences with his fusions of contemporary sounds. His approach invites the listener in with familiar sounds, executed masterfully with a deep connection to the past masters in various genres; it’s all helped him garner an enthusiastic following. Come join the Somethin’ Good fan club when Mark appears this Sunday alongside Elijah Jamal Balbed on tenor saxphone, Eliot Seppa on bass and Ele Rubenstein on drums.

The pianist, composer and arranger Tim Whalen puts none of his roles above the other—he’s a fierce, waggish improviser and a rich accompanist, with obvious debts to the bebop greats, but he also writes magnificent, interlaced pieces of his own, often arranged for large ensemble. On his new CD, Oblivion, set for release soon after this show, Whalen refocuses on the music of Bud Powell, a founder of bebop piano. It’ll be thrilling to hear those reinterpretations at the loft, when Whalen will be joined by a killer quintet of local heavyweights: Paul Pieper on guitar, Elijah Jamal Balbed on tenor saxophone, Eliot Seppa on bass and Dave McDonald on drums. And hopefully Whalen will find time to play one or two of his mind-bending originals, too.

Saxophonist Jonathan Parker has developed a popular jazz series in the Columbia Heights neighborhood, based at the Wonderland Ballroom, where he presents original tunes, arranged for an eight-piece band, and somehow manages to enthrall an audience that’s more likely to expect a bar band or a dance DJ, not a sophisticated full jazz ensemble. In so doing he uses his contemporary, ambitious, but ultimately lovable music to win over new jazz audiences. Parker’s a highly trained, deeply skilled musician with a strong sense of respect to the jazz tradition. After graduating from Oberlin Conservatory, a famous incubator of jazz talent, he spent two years cutting his teeth amongst the teeming jazz community of—where else?—Shanghai, China. Afterwards he moved to New York City, the other jazz capital, where he became more entrenched in the jazz scene while developing his sound and artistry. Now back in his native D.C., Jonathan Parker has found a perfect location to thrive as a working musician while spreading the message of jazz to newer, younger audiences. He’ll perform his originals at the loft with an expanded, nine-piece band.

Poster design by Giovanni Russonello. Altered image from “The Kiss” film, in public domain. Other photos courtesy of artists.