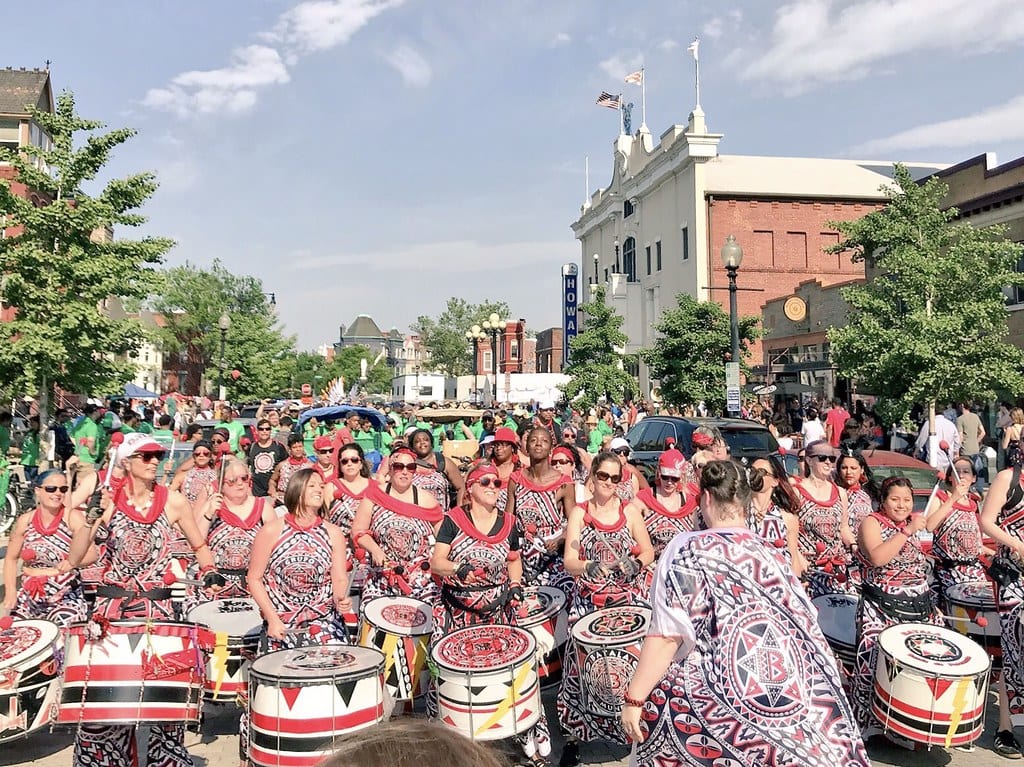 The Brazilian-drumming group Batalá performs at the 2018 Funk Parade. A new survey is currently open for responses from all members of D.C.'s greater music scene. Courtesy Joe Flood/flickr
News

Update: The DC Music Census has been extended to close on July 17.

Apparently, there are only 310 musicians working in Washington, D.C.

That statistic, based on professions listed on income tax forms, is found in Mayor Muriel Bowser’s DC Cultural Plan, which makes policy and investment recommendations for the city’s cultural life. Compare that to the number of musicians registered as members of the region’s chapter of the American Federation of Musicians (Local 161-710), which is 1,400 — and then consider the many non-union musicians and other contributors to the music economy — and things start to look extra sketchy.

If the mayor’s office aims to fully understand the impact and needs of the music ecosystem in D.C. — whether jazz, classical, punk rock or go-go — it will need to reconcile this discrepancy.

That is one of the major goals of the DC Music Census, a new survey designed to gather information about all the music made in Washington, D.C., and to then paint a comprehensive picture of that data. The census was proposed by Anna Celenza, professor of music at Georgetown University (and — full disclosure — this reporter’s former college professor), working with Maryann Lombardi, the chief creative economy officer of DC’s Office of Cable Television, Film, Music and Entertainment.

“One of the things that’s really been happening in D.C., in my opinion, was — because the city doesn’t really have a sense of who the community is, the squeaky wheel gets the grease,” Celenza said in an interview. “There were voices that weren’t being heard, weren’t even being asked to participate.… So if they don’t know you exist, they can’t do things that are actually best for the people. So the more people that respond to this census, it’s just one more person we can say, ‘They have something to say.’”

The approach seems to be bearing fruit: In the first week, 1,300 people filled out the census. It launched on June 4, and closes on Tuesday.

Celenza secured half of the funding for the study through a pilot grant in the Georgetown Provost’s Office and went to Lombardi with the idea, originally thinking the survey would pertain only to the D.C. jazz community. Lombardi suggested expanding its scope to cover all facets of D.C. music, and was then able to secure the other half of the funding through the mayor’s office.

To ensure greater participation, Celenza and Lombardi built the survey from the ground up, with input from major music community figures, and assistance from Don Pitts and Peter Schwarz (two of the major forces behind the 2015 Austin Music Census). Among those consulted were Aaron Myers of the Capitol Hill Jazz Foundation, Chris Naoum of Listen Local First, the Funk Parade board, members of 202Creates and management from venues like the 9:30 Club, Songbyrd Music House and Blues Alley.

This brain trust designed the census to full feedback from all parts of the city’s music ecosystem — targeting not only performing musicians but also presenters, journalists, activists, teachers and whoever else plays a role in the scene.

“Even if you don’t earn money as a musician but are actively involved in music, you should fill out the census,” Celenza said. “Because it’s also about space: Do you have a place to perform or a place to rehearse? Especially with all these noise ordinances, the idea of ‘Where do people get to actually work on their craft’ becomes a big issue.”

The issue of space for music has been a crucial issue in D.C. in the past year. Last July, the City Council attempted to pass an emergency measure to ban amplified performances; the council held hearings on that issue again in October; and public disagreement broke out this spring over noise complaints in gentrifying neighborhoods: both on the U Street corridor and on H Street NE. That’s part of the reason that the census creators think participation has been high thus far.

Already, the DC Music Census has been filled out by people across all eight wards, which may increase the likelihood that the D.C. government will distribute cultural funds across the entire city. Another reading of the data collected thus far shows the possibility for more venues to open throughout the District, according to Celenza.

“There are so many presenters doing events that don’t have a stable place to do it,” she said. “Or they can do it in one place for two months and then have to move. That surprised me and so that opened up my eyes to the possibility of more venues here.”

That also mirrors some of the issues that Myers and other members of the D.C. jazz community want to see addressed. “We have a thriving jazz/music ecosystem in D.C.,” Myers wrote to CapitalBop in an email. “This is not just a political town, it’s a town filled with culture, that happens to be the nation’s capital. With that, the needs of housing, healthcare, education and fair pay come immediately after that.” He said he hopes the data will show “to players in music infrastructure (agents, managers, publicists, labels, etc) that D.C. is a great place to plant their base and scout for talent, while offering those key services to DC based artists.”

Findings from the DC Music Census will be made public at the Music Policy Forum in October. The data will then live in the D.C. government’s public data and, much like crime statistics and other figures, will be accessible by anyone. Ultimately, the survey’s creators hope that it will help the disparate music communities find more common ground.