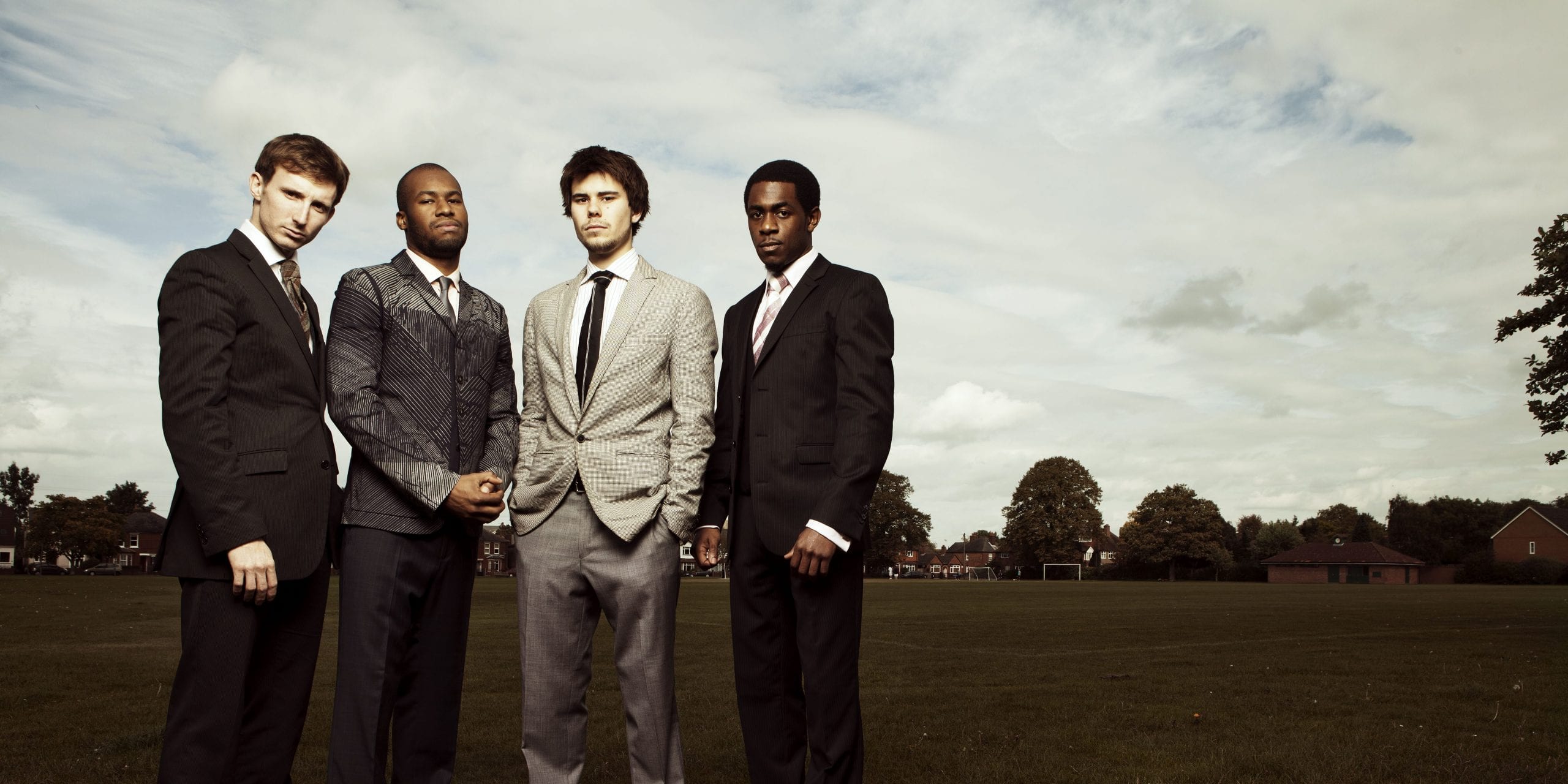 The British jazz quartet Empirical began an odyssey of unconventional public performances in early 2015 with a six-day residency at a bookstore in London. Those six short (and free) sets, only an hour each, were intended to publicly workshop ideas for a new album, but eventually began to draw rapt onlookers by the hundreds. The residency was a moment of unintentional jazz evangelism, but it was followed by a more focused, deliberate effort: Their next pop-up residency was in a London train station, where thousands of the jazz-uninitiated could be exposed to new sounds. Then came another, similarly popular one in a Birmingham shopping center.

Empirical presents a buttoned-up, uncompromising, pseudo-academic take on the jazz tradition, but it does it with an earnest desire to bring the music to everyone who will listen. It’s an interesting dissonance, and one that can really pay off — as it does on Connection, their 2016 release on the D.C.-based record label Cuneiform (which has released albums by Anthony Pirog, Wadada Leo Smith and Joel Harrison).

Empirical is about to tour the United States for the first time, and it will arrive at Rhizome DC in Takoma this Sunday, June 23. I sat down with the band’s bassist, Tom Farmer, to learn a bit about Empirical’s history, their involvement in the U.K.’s blazing-hot improvised music scene, and their own brand of jazz advocacy.

CapitalBop: I’m always curious about how a band name is settled on, especially for music without text. Is there a story to Empirical? Is there something empirical about Empirical?

Tom Farmer: A quick potted history of the band is that in 2006, some of the guys were in a group called Tomorrow’s Warriors, an educational group in London that trains up young musicians. The idea is that you take it on, you make your own band. Out of that project came a group of guys that Shane and Nathaniel were in. They made this band, and they came up with the name Empirical. It’s a scientific term: It means gathering knowledge through observation — through experimentation and observation — which is really apt for an improvising group. It stuck, and in 2008 we settled on a lineup.

CB: Tell me about this Birmingham pop-up jazz lounge. What led you to this idea? What did you learn from it?

TF: Well, that was just one instance of a project we’ve been running now for four or five years. It started off before Connection…. We wanted to do some repeat performances. So I hustled a residency at a bookshop in London: We played in there at 5 p.m., [six] nights in a row, just an hour set to work up some music. And what we noticed is that the word spread, so by the end of the week, by the Friday, it was absolutely rammed in there — like 200 people in this tiny space. So we thought, this is a great idea! [laughs] Let’s try to take this on, put it in front of people where they can see it.

We had this idea to go into a Tube station, in London, Old Street Tube station. We hired a shop; we’re like, we’re going to play in here every day, all day, for a week. And there’s 10,000 people walking past. And people just come in, there’s music, and they’re like, “What’s this?” … and then it builds, so by the end of the week, people were making special trips to come and see us, so we can engage with them. We’ve done it, like, four or five times now, at different locations in the U.K., and once in Berlin. Same kind of model: Hire a shop for a week, and play in it all day, okay, and see who comes in. I dunno, we must have met three-and-a-half, four thousand new people in a week, who have never heard of us before — and have never heard jazz like that. And people like it or they don’t like it, but at least they know it exists. So that’s the project.

CB: Did you have any standout moments of revelation on people’s parts? Any unique experiences there?

TF: Yeah, definitely. There’s some videos on our channel, little pop interviews. Some people are really moved by it. They don’t know this music, you know — they wouldn’t find it otherwise. They wouldn’t go to Ronnie Scott’s or Vortex [London jazz clubs] on a whim. They’re not going to go and take that risk. It’s expensive, and at times limited. But on their way to work, they’re like, “Wow — we’re going to come back and check it out.” We had a couple guys who kept coming back; it made a real impression on them …. They’re getting access to a music they would have never heard before.

CB: You’re signed on Cuneiform. They’re a label that’s based here in the D.C. area, in Silver Spring…. How did you get connected with them?

TF: In 2015, we had a bunch of music ready, and we were just looking around for options. I noticed this British band called Led Bib that had a record out on Cuneiform. I looked at the label, and I noticed that quite a few important Brit-jazz records were on there, reissues and such…. I was interested, and I reached out to Steve [Feigenbaum, the label’s head]. I really appreciated his straightforward manner — it’s something that we don’t experience much over here. Very direct, very up-front: This is what we can do, this is what we can’t do…. And I was like, “Cool, let’s try to do something.”

CB: This is an exciting time for British jazz. Figures like Shabaka Hutchings, Nubya Garcia, Yussef Kamaal — it seems like they’re developing a particular style. Do you see yourself as a part of a new movement that’s distinct from American jazz in some way?

TF: I mean, a lot gets talked about that. We in the band try not to make those differentials, you know — we just try to play jazz music…. I think geographically splitting it, to me, is a little against the interest of it. It’s these cultures coming together that made it. It’s tradition; there’s room for all cultures to express themselves under the same genre, I guess? I’ve always been a bit resistant [to] those labels. There is a sound coming out of London, for sure, at the moment that everyone’s kind of getting into. I don’t see us as part of that, really — I’m quite resistant to it, actually — that kind of merging with dance aspects, Afrobeat aspects, a little bit more up front and in-your-face, high energy and stuff. I think, for us, we’re a bit longer-form and a bit more of a story in the music … a bit more improvised, perhaps. But I’m desperately trying not to be too cynical.

CB: No, I’m sure that for any sort of communication you do with Americans on this, you have to answer that question of, “Oh no, I’m not like Shabaka Hutchings. I’m not playing that exact same thing as that name you’ve heard.” I’m sure that gets a little old after a while.

TF: Yeah, and … we really aren’t playing that music, quite deliberately. It’s not our bag. But I’ve known Shabaka since college — he was in college with me. We’re all good friends on the scene. We all support each other.

’People like it or they don’t like it, but at least they know it exists. So that’s the project.’ —Tom Farmer

CB: Do you see the music that Empirical makes as being of a tradition, or of a community? Who are some names I could look to?

TF: I think that generally we come out of the jazz tradition, more so than others. And by that I mean mid-’60s Black American music, I guess. We definitely draw from that the most. We’ve been — if you look at all the albums we’ve made, they’ve all been quite eclectic in terms of influence. It just happens at the moment we’ve been getting into a kind of quite improvised, quite open and expressive music … very long stories and evolving pieces. It’s very improvised, which is nice, because it means it’s really of the moment. But yeah, I would say those mid-’60s traditions. Obviously Eric Dolphy is a big influence on us. We’ve been taking in Trane as well, like ’60s Trane. All that stuff. We’re just playing like that, at the moment.

TF: A big part of how we think about it is that we think those messages that are in the music are still quite relevant today — that it’s about playing something together that’s bigger than the individuals in the band. It’s not about one solo, it’s about the whole thing. That’s definitely something we think is still relevant; there’s a bit of a move away from that, I think, which is a bit more towards, “What can you do? Show me something cool.” … You’ve got 20 seconds of a Twitter video.… That struggle for freedom in the music, and expression of something bigger than ourselves — that mid-’60s tradition — I think that’s what we’re trying to channel. Without sounding too pretentious.

CB: Building on that, it seems that you all are committed to the model of Empirical as a band, which stands in contrast to the more common jazz model of the leader and a sideman. How does being a band frame how you think about your music? How does that inform it?

TF: I’ll answer that by saying it’s our greatest strength but also our biggest weakness. We really strive to be quite democratic in the music-making. When you’re improving, literally anything goes. It becomes a bit of a game in the moment, like, how much can you go away from the idea for it to still be that idea? How much can this piece become something else while still being that piece? That’s the thing we like to play with…. Ultimately, you’re trying to reach a consensus. But yeah, I know what you’re saying; it’s different to most bands. And there are practical problems to trying to do that … but I think it’s worth it, ultimately, because the band sounds like the band. We’ve got such shared history: 10 years of playing together at a really high level. You just can’t erase it — it’s just there. It’s kind of what makes it … you know, good.