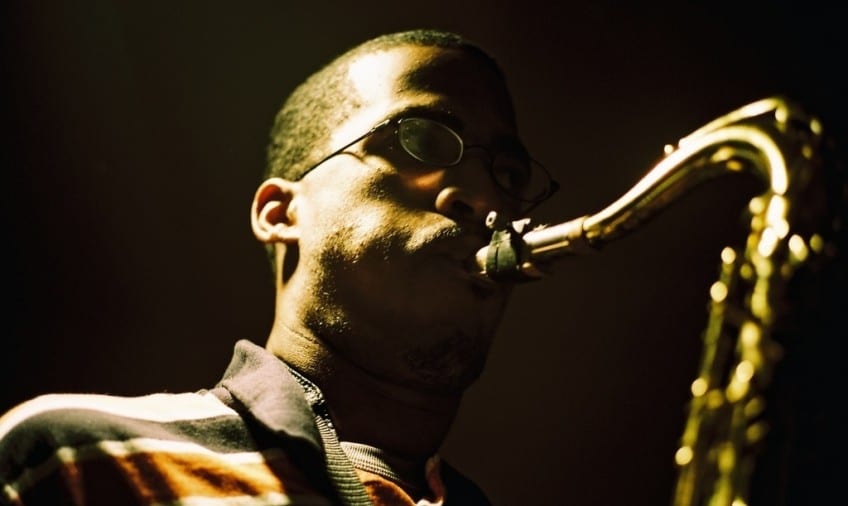 Can a focused mind wander? Can a peaceful person do battle? Contrasts and unlikely associations seem to guide the young saxophonist James Brandon Lewis, perhaps none more than this one: How does complication and murkiness help you access something simple—even elemental?

Lewis, 30, was raised playing jazz and gospel in Buffalo, N.Y., then educated at Howard University and the California Institute of the Arts. With a sound that reaches out, touches firmly, then pulls away, he seems accustomed to following his convictions on a beeline, even when they lead into the thicket.

What I’m angling at here is that things sometimes get choppy on Divine Travels, Lewis’ new album and his first on a major label, but they never throw you overboard. The record casts an imposing shadow—it features William Parker on bass and Gerald Cleaver on drums, two of the most storied free improvisers around, and finds Lewis in wrangling, stippled interplay with the poet Thomas Sayers Ellis on two tracks. But it doesn’t let go of you, partly because Cleaver plays the drums like Abdullah Ibrahim plays piano, laying out a bed of tone and topography rather than overemphasizing his punctuation marks. And partly because Lewis is big on consolidating impulses: He makes sense of all his reference points (classic gospel, mid-period John Coltrane, Dewey Redman) by draping his improvisations around minor-key structures. They give your ear context, and a home base.

Lewis performs at Blues Alley this Thursday with a different trio: Dominic Fragman on drums and Luke Stewart (also an editor for CapitalBop) on bass. Lewis and I spoke via phone earlier this month about his time as an undergraduate here in D.C., his collaboration with Ellis (a D.C. native and former go-go singer), and the dedication to openness that informs his approach.

CB: It’s not uncommon for jazz musicians to begin their studies in the church, but you actually went out West for a while and started a gospel career. What did you pick up along the way?

I was even a part of church groups while I was a student at Howard. I helped out as a chapel assistant at Rankin Chapel. It’s just been a part of my experience.

CB: You seem to be very conscious of the saxophone’s voice-like quality. Who has helped you develop an understanding of the instrument from that point of view — in terms of predecessors, mentors and peers?

JBL: We don’t have that long of a day to get into all that! I tend to want to refrain from cliché things, so I don’t want to say a cliché thing. But what I will say is that while I was in D.C. I studied with Charlie Young. He’s a legend in the city. When I met him, I had been playing in the church but also taking private lessons. I was in county band in Buffalo. As these things developed, when I met him, we got the sound aspect together, the technique, all those things.

Then fast forward to being in California, and I’m working with Wadada Leo Smith and Charlie Haden. I just played the Dolphy Festival in Montclair, N.J., and I played with Richard Davis and Andrew Cyrille, all these amazing people.

But I think what’s informed me is my own personal search. Early on, when I was at Howard, I was into Dexter Gordon and Wayne Shorter. Then later on, I think the people that I sort of latched onto and investigated on my own were Yusef Lateef, Ornette Coleman, Wardell Gray. It really was the study of [Gray] and Dewey Redman one whole summer. There’s this Wardell Gray box set, and what I took away from that is that Wardell Gray was very lyrical. He had a good mix of the bebop and the big band-era sound. That really made him have a great, lyrical line; it didn’t sound very patternistic.

Now, if we think about Dewey Redman and Ornette — who has a very vocal quality — you can listen to recordings of Redman when he’s trying to speak through the horn. Literally saying words while he’s playing sax.

CB: You mentioned avoiding cliché. How’s that manifest in study?

JBL: When you’re in school you learn the techniques and scales. But then when you’re out of school you learn music. Which is more of a philosophical approach. You’re constantly searching to define you. Your path is uniquely yours.

CB: Washington, D.C., is an underrated but extremely important incubator of American music, particularly Black music. Can you talk about what it was like to be here?

JBL: First of all, of course, I was coming from Buffalo, N.Y., which also has a rich history of music that no one talks about. [laughs] I reflect a lot on my experiences in D.C. and then getting my MFA at California Institute of the Arts. I enjoyed D.C., I learned a lot. When I was in D.C., I was playing with my friends a lot. We were shedding Chick Corea, those kinds of things.

In my big band alone you had Eric Wheeler, you had McClenty Hunter, Taylor Pace. So many amazing musicians that are now in the thick of things, I went to Howard with.

CB: How did your relationship with Thomas Sayers Ellis develop, and how has it opened you up artistically?

JBL: I met Thomas in 2011 at a residency in Florida. That’s also where I met Matthew Shipp. It was the Atlantic Center for the Arts. There were three master instructors: Thomas, Matthew and Rick Lowe. Some of my peers were coming out of [Ellis’s] class—other students, because I didn’t take his classes—and I noticed that a lot of kids were coming out of the room crying. I said, “Wow what’s happening?” I think I was sorta drawn to that—like, I need to meet this person, see what’s up.

It’s a tough love approach that sort of reminded me of Howard. I don’t know if that pushing works for everyone, but I think it is a method that can be used in learning, in trying to get people to where they need to go. So, quite naturally, I just hit it off with him.

And then he was one of the people, along with Matthew Ship, James Newton and Wadada Leo Smith, who encouraged me to move to New York.

CB: Talk about what it’s like to work with him.

JBL: When we collaborate, I think what I get is that it’s not about me, it’s not about him, it’s about the overall sound of the collaborative process. When I think about Skin Inc. [Ellis’s most recent poetry collection], the way it looks on the page is very similar to the way I think about music naturally: It’s very fragmented.

When I was at Howard, my friends and I would accompany poets and we would just be grooving with the poet on top. It’s kind of this cliché thing. My collaboration with Thomas has been anything but that. It’s more like, I go home and look at the poetry, me and him study the lines, and we come up with different things. It’s very fragmented.

And then Thomas was in go-go bands when he was growing up. So it’s quite natural for us to get into a groove, a headspace, where we’re almost one voice. I’ve learned a lot just in the way that he thinks. Even sometimes when we listen to music, there might be five or six voices. And he can hear all six voices in one voice. I don’t necessarily go into this thinking I’m the saxophonist and he the poet; we’re just trying to create one sound. And he can hear like that—which is amazing. That’s like Gil Evans, hearing everything as one composition. So I’ve learned a lot.