Will 2015 be the year when Black Lives Matter became a national conversation you had to address, with voices raised, ears opened, demands made and met—when we started to truly reckon with the fortress of racism that pushes huge numbers of Black and Brown Americans into isolated suburbs, under-funded schools, over-stuffed prisons? Or might this year go down as just one more step in our march toward absurdity, toward an existence dictated by mass media and mortgage-backed securities, where a few rich families decide what we hear, discuss and feel? Either way, you can be sure that music will be a big part of helping us forage for—that is, forge—the answer.

Jazz has always been a catalyst: It’s a vessel for revolutionary messages and a tool for social change. So when trombonist and educator Shannon Gunn approached CapitalBop recently to see if we’d help her present a festival highlighting jazz’s role in the struggle, we were there in a heartbeat. This Sunday, Jan. 18, we’re thrilled to be teaming up with Shannon’s JTTB Records to host D.C.’s first-ever Jazz and Freedom Festival. 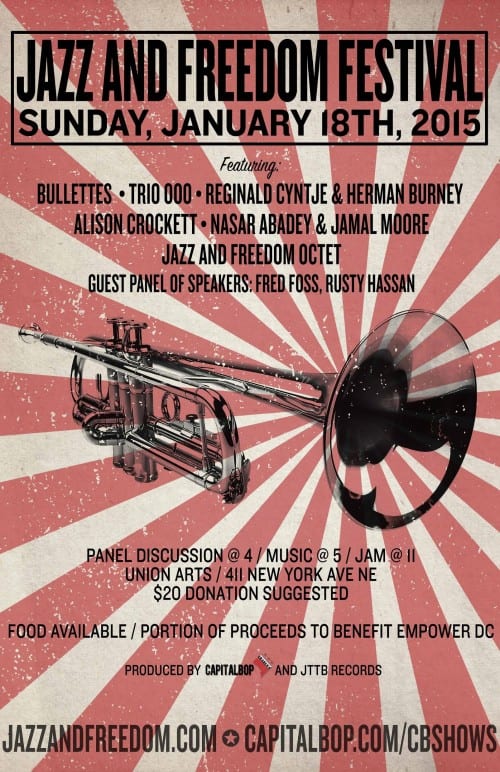 With an ear toward the Black Lives Matter movement and the continued campaign for racial justice in America, the festival will feature six musical performances as well as a panel discussion on music and activism—and proceeds will be donated to Empower DC, a non-profit dedicated to community development in D.C.

Taking place the night Martin Luther King, Jr. Day, the festival will run all evening, from 4 p.m. to 12 a.m., at Union Arts. It will feature a guest panel of speakers and six bands—jam-packed with many of D.C.’s very best improvisers and composers—followed by a jam session at the end. There will be food and vendors, creating a bazaar-like atmosphere as you walk in.

Shannon was inspired to organize the festival by a similar performance, in which her professors at Michigan State University played a consciousness-raising concert as part of a Martin Luther King, Jr. weekend celebration in 2003. We worked together with Shannon to put together a lineup of artists and speakers, and we decided to put the money where our mouths were at by using the event as a fundraiser for Empower DC. It’s a remarkable community-activism organization, whose mission is to enhance, improve and promote the self-advocacy of low- and moderate-income D.C. residents, in order to bring about sustained improvements in their quality of life.

At 4 p.m., the event kicks off with a panel discussion on jazz’s role in social activism, featuring saxophonist and educator Fred Foss and DJ, journalist and organizer Rusty Hassan. Foss played saxophone and woodwinds with Hugh Masekela and Lionel Hampton, among others. Hassan has a long-running jazz radio show at WPFW-FM, and is very knowledgeable about the history of jazz and its ties with freedom and justice.

Then at 5 p.m., Shannon Gunn and the Bullettes, an all-female octet, will kick off the night’s performances with a tribute to Charles Mingus. Following that, free jazz ensemble Trio OOO will play at 6 p.m., then trombonist Reginald Cyntje and bassist Herman Burney in a jazz duo at 7 p.m. At 8 p.m., local songstress and social justice advocate Alison Crockett will perform selections from her one woman show, “Is This It? My American Dream.” Following her performance will be a cross-generational improvising duo at 9 p.m. featuring Nasar Abadey on percussion and Jamal Moore on reeds—the two have never played together before.

At 10 pm the Jazz and Freedom Octet, an ensemble created to promote peace and social justice by performing music that inspires freedom, will perform pieces by the individual band members. The Jazz and Freedom Octet comprises Jessica Boykin-Settles on vocals, Grant Langford on tenor sax, Donvonte McCoy on trumpet, Elijah Easton on tenor sax, Shannon Gunn on trombone, Sam Prather on piano, Karine Chapdelaine-Walker on bass and Savannah G. Harris on drums, and will be joined for this performance by Tony Martucci on congas.