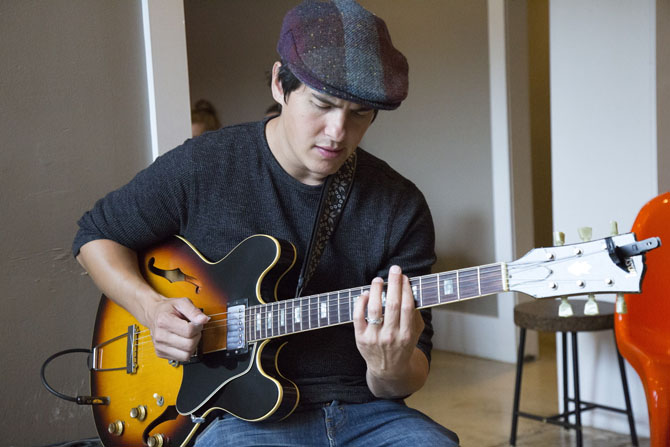 Guitarist John Lee is everywhere on the D.C. jazz scene. Well, really anywhere there’s a gig up and down our section of I-95, between Northern Virginia and Baltimore. Pre-pandemic, you could often find him at the side of Nicole Saphos — the Fiona Apple-adjacent jazz singer-songwriter and bassist — adding rich texture and detail to her subdued, breezy tunes. Or maybe you know him from his work with Kris Funn and Cornerstore, over nearly the last decade, adding harmonic structure as well as roaring, shredding solos to that trio’s knockout rock/funk/jazz. He also plays further out with the likes of saxophonist Sarah Marie Hughes and Baltimorean trumpeter Dave Ballou, two strong forces in creative music in our region.

Lee’s ears and fingers travel well beyond the DMV jazz and creative music scenes, too. When I spoke with him on the phone this week, he was keen to talk about the influence and impressions he received from touring with Malian singer and actress Fatoumata Diawara, as well as the widely respected Brazilian percussionist Cyro Baptista. The textures he produces through guitar and pedals as well as the way he attacks the strings reveal wide travels.

The 42-year-old Lee grew up on a steady diet of Yes — the British progressive rock band, known for their expansive, exploratory albums in the 1970s — before also taking in all he could about John Coltrane, Jimi Hendrix and Hermeto Pascoal. Listen to Lee’s solo on the Cornerstore track “Ghettobird,” and the influence of Steve Howe, Yes’ longtime guitarist, is clearly perceptible alongside his other influences: the fuzz and funk of Hendrix; Coltrane’s sheets of sound. Lee’s fingers run up and down the fretboard like they’re running a marathon on a mountain range.

He brings it all into his own music, which he describes as a “meditative journey.” After many years in D.C., he will headline Blues Alley for the first time on Monday, leading a strong band featuring some of Baltimore’s best: Ballou on trumpet, Jeff Reed on bass and Eric Kennedy on drums. We connected by phone last week to talk about his career thus far, his plans for Monday, and how Lee gets what Funn calls a “pyrotechnic” sound from the guitar. (This interview has been lightly edited for length and clarity.)

CapitalBop: I think a number of people these days will know you from your work in other people’s bands, like Kris Funn and Nicole Saphos. Can you give us an idea of what your music is like as a bandleader? What are the sonic cues you might use to explain it?

John Lee: Well, before I played with Nicole and Kris Funn, like 20 years ago, I used to only play my own music. So, a lot of people from the past kind of only know me as someone who plays their own music. It’s been a while. So, my music — I don’t know how to explain it! It’s just like its own world. It’s its own thing. It’s kind of like a meditative journey. For me, it takes me out of the body and goes somewhere else.

CB: Dave Ballou’s presence in the band would suggest it might be more “out” than straight-ahead.

JL: Well, I think my music is more structured than the stuff I play with him, but yeah, I play a lot of freer music with him. Having him makes me even more comfortable if we want to leave what’s been arranged to go anywhere.

CB: Talk about the rest of the band too. This lineup of you, Ballou, Eric Kennedy on drums and Jeff Reed on bass seems like a strong one; what do they all bring to the music?

JL: Jeff asked me a couple years ago to play with him at Bertha’s, and I had never played with Eric. So, Jeff was like, “Oh you gotta play with Eric.” So, I played some of my tunes with Eric, and was just thinking: This is amazing! He’s just so dynamic. Eric can play super-soft and super-loud, and that’s what I was kind of looking for now, that I had not really experienced in the past. Just being able to put more dynamic range in my music, as opposed to everything being the same volume. And I can just count on Jeff: I’ll know he’ll show up and bring it. I feel like if I have Jeff in the band, I don’t have to worry about anything.

CB: Kris Funn once told me that he realized he needed your guitar “pyrotechnics” in his band, Cornerstore, and the jazz-rock vibe you bring. Have you always had that style? How has your playing developed over time?

JL: I come from a Grateful Dead, prog-rock background, and I got into jazz later: towards my later years of high school. As I got towards the end of my first year of college, I started discovering styles of music that I had never heard, like Hermeto Pascoal and Frank Zappa and Son House and Delta Blues, and even Jimi Hendrix. I did not really deeply get into Hendrix until I really got into jazz and that was just an, “Oh My God!” falling in love with music again [moment]. So, I guess I’ve always been about pyrotechnics, just being a super-creative guitarist and being open to being influenced by a number of different styles. I love so many different things and have tried to always bring it together in one pot.

CB: And I do not get to talk about prog-rock here often, so let’s focus in on that! Talk about the prog bands you fell in love with.

JL: Well, it was mainly Yes. I was crazy about early Yes, like Tales from Topographic Oceans, Relayer, Closer to the Edge; I was really into that from a compositional point of view. At the same time, I was doing a bunch of improvising with these Grateful Dead-ish guys I was playing with in high school. This one guy, Ed Sauce, who was a drummer, he was the one that opened me up and introduced me to all these styles of music. That definitely influenced my writing at that time.

CB: So, Steve Howe was the blueprint.

JL: Yeah! I was really into Steve Howe; I was crazy about him! Like in my car on the way to high school was Steve Howe and then, maybe, like a year later was Stellar Regions by Coltrane. I shifted that way.

CB: Does Trane influence you as a guitarist and improviser? Did other non-guitarists?

JL: For sure. People taking it to that level of spirituality — Coltrane, Hermeto — were like the be-all, end-all. I would say Coltrane is definitely one of my hugest influences. I also really got into Wilco and Jim O’Rourke and Deerhoof later. That was a big thing for me. Then, just really being into blues and Malian music, I really fell in love with the music of Mali later, and I toured with this artist Fatoumata Diawara for four years. Then I played with Cyro Baptista, the Brazilian percussionist: That was a huge influence on me. And he’s in that John Zorn scene. So, playing with all those musicians, like Brian Marsella and Tim Keiper, who were good friends of mine — we were in a band called Caveman when I was in my twenties. We were all really influencing each other to check out different composers and different styles of music, globally speaking.

CB: To follow up on what you said there, when you write do you aim for more spiritually driven work?

JL: Not necessarily, but it’s just where I go to. I do not know if it’s spiritual, but I am trying to make a kind of deep statement, or something, without even knowing what it is. It’s just sound. 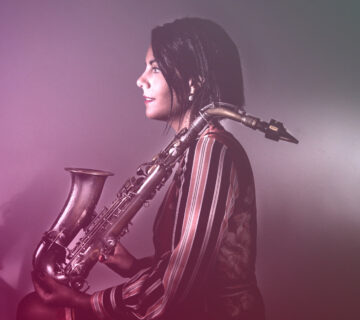