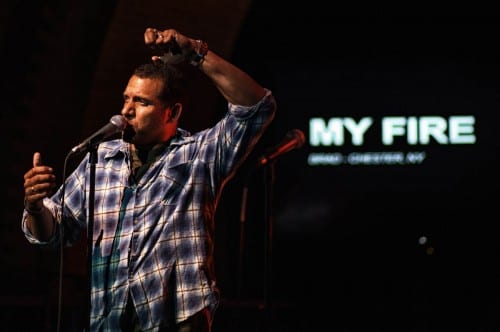 As the United States enters its 10th year at war in Iraq, and approaches its 12th in Afghanistan, the effects of war have never been more cloaked. In the early years, the wars and their progress were at the center of news pundits’ talking points. American casualties were updated alongside the terrorist threat level. But as the media’s focus has shifted toward the economy, immigration and other domestic issues, one of the most significant conflicts in American history is quickly being forgotten. Our collective amnesia is due to a number of factors. For one, the nature of modern conflict has changed dramatically. Military personnel management has evolved to the point where some soldiers are stationed in large, office-like buildings in major cities, going to war as if it were a normal office job: punching in, rather than getting a rude awakening by mortar fire; eating lunch at Starbucks, instead of a quick MRE scarf; driving home in a Jetta, not back to base in a Humvee. While roughly 66,000 U.S. troops are still deployed in Afghanistan, approximately 8.5 percent of Air Force pilots control unmanned aerial vehicles, popularly known as drones – and many of those pilots are deployed right here at home.

The public conversation in the media may have been quieted, but there are few here in the United States who do not have some sort of connection to the war. Many family members, co-workers, and friends have served stints overseas. The effects are certainly felt in the economy. But unlike during certain previous wars, the national cultural reaction has seemingly fallen silent. While we have experienced large protest actions, our biggest activist movement – Occupy – was not against war, but against corporate greed. Much of today’s “protest music,” if there is any, confronts domestic injustice. The “Machine Gun” of the new millennium has yet to emerge.

Also, at this time, the country’s community of creative musicians has never been further from the veterans community. In the past it was almost a rite of passage for a developing musician to spend some time in the military. Many legendary innovators participated in military bands, where they honed their craft and forged collaborative friendships. Today, the war’s veterans and the musicians’ community have largely been on opposite sides of society.

With “Holding It Down” – a multimedia performance that was staged three times last weekend at the Atlas Performing Arts Center, its first presentation outside of New York City – the pianist Vijay Iyer and the MC and poet Mike Ladd are attempting to rebuild the bridge between veterans of the current war and the rest of creative society.

“In a way, we kind of walked into this situation,” Ladd explained in an interview before the Friday performance at the Atlas. He and Iyer have been collaborating on innovative projects since “In What Language,” which explores spatial theory in airports as it relates to people of color. It started in 2001, just before September 11. Since then, Iyer explained, “All of these projects have been about … post-9/11 America from a Black and brown perspective.”

For Holding It Down, Ladd and Iyer immersed themselves in the veterans community, conducting dozens of interviews and engaging in serious dialogue with those who were affected by the war in Iraq and Afghanistan.

The performance is a sensory overload, bombarding the audience with powerful music and images. It tells a harrowing story — of war and the emotional rubble that new veterans often find themselves living in — largely by exploring the dreams they have when they return to civilian life. Nine performers adorn the stage, four instrumentalists and five vocalists, while projectors intersperse different clips of veterans sharing stories and feelings. With the exception of the military veterans and poets Marice Decaul and Lynn Hill, all are well-known and well-respected musicians and performers. The instrumentalists, led by Iyer, skillfully meander through compositions that complement the dialogue. But the real highlight of the performance is in the message.

Hill was a soldier in the Air Force. She went to war while living in Las Vegas, Nev., piloting drones from within a military facility there. In one of Holding It Down’s most exceptionally moving moments, Ladd and Hill enter what seems to be unscripted dialogue after the already powerful recitation of Lynn’s poem, “Capacity for War.” The war has just been explained to the audience from the mouth of a soldier who “fought” in it. 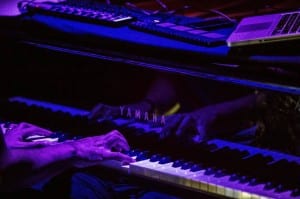 “We’re like Big Brother…. We can see everything,” she explains, describing the experience of navigating a war zone from behind video screens at a private facility surrounded by a gate. “The gate was a barrier between the war and real life.” On one side, Hill says, she was Lynn. On the other, she was Sgt. Hill. But once she was relocated to another unit, she began receiving orders not as Sgt. Hill but as Lynn. The gate virtually melted away. “When orders to fire were attached to ‘Lynn,’ I had nothing to hide behind when I got home,” she says. “My name is scarred, the holder of my reputation. And I can’t change it.”

Ultimately, the project wishes to open up an ongoing dialogue with veterans, who have generally responded very well. The premier was at the Harlem Stage Gatehouse in New York this past September. In the audience were many veterans of past wars. “This was, in several cases, their first time connecting with people from this new 21st century veterans community,” Iyer explained.

More of Marc Millman’s shots of Holding It Down can be found at marcmillmanphotos.com.