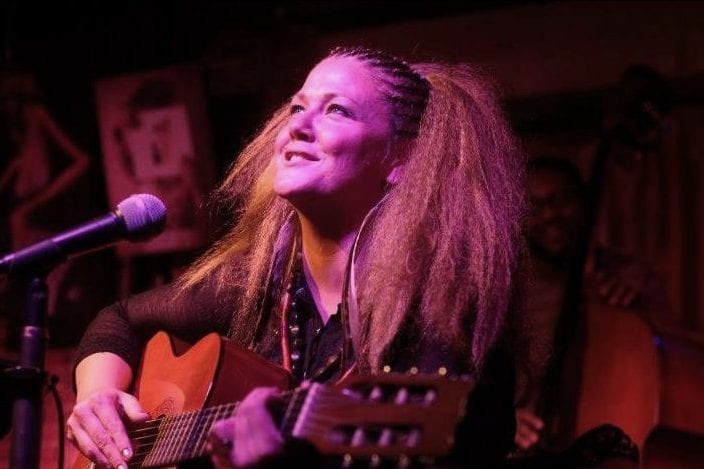 Go hear Heidi Martin perform at the Atlas Performing Arts Center this Thursday, and you’ll witness a woman unloosing her burdens. The songwriter and vocalist will whisper, and hum, and howl. She’ll pry on notes like hot iron. And with her lyrics – which banter and fold into each other like a shrewd internal monologue – Martin will let you in on things: fears, frustrations, imperfect ideals, the delicacy and strength of her passions.

But that’s not what you’ll leave the theater holding onto. Martin — who may be D.C.’s most original songwriter, in any genre, and is surely one of its most under-appreciated singers — means to turn your attention inward, by example more than entreaty. It’s why we listen in the first place: When an artist reveals herself with such unfaltering inquisitiveness, she helps us raise the bar for ourselves.

At the Atlas, Martin will be debuting a long-gestating project called The Race Card, which marries music, documentary, photography and provocation. The production treats one of her dearest topics: the open and untreated wound of America’s racial sins. Music, logically, is the launch pad; Martin will perform some of her original songs attacking the issue. But from there, she plans to move into other realms, showing portraits by the photographer Rahmeek Rasul and videos she took of friends answering questions about racial identity. And since Martin hasn’t got any time for complacency, she’ll ask members of the audience to respond to those same questions.

The project grew out of frustration with fellow white Americans, who she says use silence to avoid comprehending the roots of their privilege. “I started to really notice how in white culture, the media has all this false intimacy, and there seems to be this bridge of white and Black folks getting along – but without anyone really addressing what had gone on before,” Martin said in explaining her decision to create The Race Card, which she started developing about five years ago.

Her songs are nothing if not a deep search. “Do you know the history we’ve been eating / off the coast of Carolina’s gold? / Wasn’t just rice that was sold,” she sings in “Rice,” a tune from her 2005 album, Hide, that treats the sordid legacy of South Carolina’s rice plantations. “How many tons of men did this country pay for? / We have yet to digest peace in our gut.”

History is a major concern, but Martin’s default is disclosure. Her words tend to arrive in a self-seeking tumble, sticking to each other with easy wordplay and a bouncing patter. “If we ride in the back of the bus / Don’t mean I’ve walked in your shoes / But if I’m feeling low you know I can sing your blues,” she sings in “Brooklyn,” a vamping standout on her most recent album, 2007’s See Hear Love.

My guy keeps me open,
He don’t care if I’m broke, buying breakfast with a token,
Or if I find a man strolling too far up Nostrand….
If we lose our religion or lust,
God will protect and guide us.

“Everybody plays it safe, because it’s easier to work when your music is safe and you cause no ruffles in the skin,” said the pianist George Burton, a longtime collaborator. “She’s taking that chance – she’s talking about everything that she’s seeing out in the open. It’s the singer-songwriter’s perspective, which I don’t find in many jazz singers…. She’s applied that folk influence from the ’60s to a whole different genre of music.”

Martin was born on March 20, 1965, and grew up in Mitchellville, Md., where her earliest musical heroes were the singer-songwriters with whom she still identifies: Rickie Lee Jones, Bonnie Raitt, Joni Mitchell. (In most of Martin’s work, Mitchell’s influence lingers. There’s the bright but flinty inflection; the parade of imagery, woven with bits of observational philosophy; the occasional upsetting of harmonic symmetry with a high, held note from a different key.)

Martin remembers that when she was young, her family was one of a handful of white households to move into a new development in Mitchellville. It was built around three model homes, and not until all the other houses had been filled did a Black family arrive and move into one of the models. “Nobody invited them over. And it struck me that we’d all been up in their house – we’d tramped our feet all over the floor of that model home – but they couldn’t get invited to anything,” Martin said. “Their kids were the best behaved, the best at school, but we didn’t know shit about them.” (In the mid-1970s, Prince George’s County, where Mitchellville is located, became the country’s largest school district to adopt a busing policy. The disappearance of white families — first from public schools, then from the town — was swift. Mitchellville is now home to one of the United States’ most affluent majority-Black communities.)

When she was 17, Martin’s father was sent to jail. When she went to see him, she found that she was the only white person in the visitors’ line. “I’ve always been an open person. My lack of certainty has been a blessing,” she said. “In that moment, I absorbed a consciousness that had been hidden from my family, and it caused me to almost immediately identify – because my father was there too.” For Martin, it provided what she calls “the seed of distrust.” From there forward, wariness of institutional wisdom was her baseline.

Martin grew up in the years just before jazz education became the expected path for any young musician demonstrating virtuosity. She generally kept to the folk, country and pop music she was used to hearing. She learned a little guitar and piano, and developed her vocal chops, and after high school she spent a few years working a day job and performing recreationally. Then a waiting gig opened up at the Newsroom Café, a jazz club on Wisconsin Avenue. The first night she worked there, a band of prime local musicians performed. “It was Marshall Keys on saxophone, Rueben Brown on piano, Steve Novosel on bass, and Steve Williams on drums. I connected immediately upon hearing jazz,” Martin said. “I had never heard a music before that contained every emotion. It contained all of life – the joy, the sorrow, the things that we don’t admit.”

Brown began to mentor her, and suggested she enroll in the University of the District of Columbia’s jazz program. She took the advice, studying with Prof. Calvin Jones and listening constantly to jazz singers in her room at night: Sarah Vaughan, Carmen McRae, Cassandra Wilson. Martin left UDC after a few semesters, and played music around D.C. for six years before moving to New York in 1997. That’s where she acknowledged a need to swing back to her roots in folk, and to depart from the standard jazz repertoire. When she showed some original tunes to the musicians in her band, they told her she ought to focus on her talent as a songwriter. She started penning the sort of songs that now define her: vamping canvases that cut against comfort in the way jazz does, but soak in the warmth and volubility of folk. And the unhurried cadences of soul are laced through it all.

Martin also started playing around with personalized strategies of vocal improvisation. Today, a live trademark is the games she plays with three- or four-word shreds, a kind of sample-based scatting. She’s let that word-wrangling tactic seep into her songwriting, too; on record, she might meditate on a short phrase, pulling out words and slowly transfiguring the meaning. Putting them back together in a different form, she can segue into a new verse with a soft left turn, rather than a clean break.

“She would do that jazz vocalist thing – sing and stand to the side,” the drummer John Lamkin, whom Martin credits as a formative influence, said of her stage persona before she broke free of the classic jazz-vocalist role. “I was like, ‘No, jump in there! … Think of words and phrases that have to do with the message you’re trying to get across, and just go ahead and start singing. You have a band behind you, so if you come down we’ll come down. If you wanna go loud, we’ll go up with you.’ Heidi would just hit it. The band would take off and we would end up somewhere just totally different.”

Martin had released one album – a solid compendium of standards, Alone Together (1998) – when she went into the studio in 2001 with Eric Revis, Dana Murray and Gregoire Maret to record a demo for what would become Hide, her first CD of originals. Just a few months after the session, she was pregnant, and decided to move back to D.C. to raise her son. She didn’t finish the album until 2005, but when she did, it showed the singer she had become — one whose poetry flows out with comfortable wisdom and candor, with a firm grounding for the outrage it expresses.

In D.C. over the past decade, Martin has performed at most of the city’s major jazz venues, and recorded another album. See Hear Love is probably her high-water mark thus far, with an interest in traditional African instruments and rhythms thrown into the mix. She fleshes out her wordy grooves, and leans hard on a special synergy with the limber, woody bass playing of Kris Funn.

But when a vocalist decides that the standard repertoire is too constricting and insists on working through her own genre-defiant material, she doesn’t get as many calls. She’s no longer an ideal pickup player; that’s not the stuff of hotel and society gigs. All of which adds to the strain of making ends meet as a now-single mother of two boys.

“I was always going back and forth, thinking, ‘Am I going to do standards this way in order to get a following with these folks?’ And I realized that I’ve got to give that up. It’s not who I am,” Martin said. “Who I am is someone that writes a lot about race and consciousness and spirituality. I think in the last two years I’ve gotten really genuine about who I’m trying to be as an artist. I’m not answering everybody’s ads. And if it doesn’t become lucrative that’s okay, because I’m just sharing my life experience – and nothing more.”