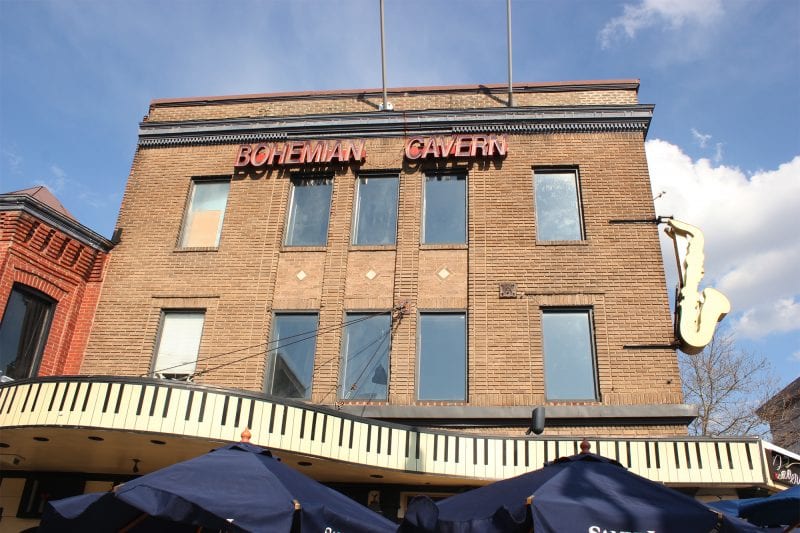 After more than three years of vacancy, a new business is set to move into the historic Bohemian Caverns building at 11th and U Streets NW, the landlord has confirmed.

A planned restaurant and jazz venue named Mama ‘San will start a five-year lease with the building’s landlord, Al Afshar, starting in late 2019 or early 2020, he told CapitalBop. The business has applied for a Class C Tavern license from the D.C. Alcoholic Beverage Regulation Administration, including “an Entertainment Endorsement, Dancing and Cover Charge.” The hours of live entertainment are listed on the application as 10 a.m. to 3 a.m. for Sunday through Thursday, and 10 a.m. to 4 a.m. on Friday and Saturday, according to records available on the ABRA website. The blog PoPville posted on Thursday about the appearance of an ABRA “Notice for Public Hearing” placard that had been placed on the Caverns building.

Afshar, who purchased and reopened the Caverns in 1999, after years of dormancy, told CapitalBop that the new tenants are planning to use the building for an American restaurant on the main floor, with musical performances in the second-story space and basement. “There will be Latino music, Latin jazz music, upstairs,” Afshar said Monday, adding that the downstairs will feature other kinds of jazz. David Bailey Jr., the representative listed on Mama ‘San’s ABRA application, did not respond to phone messages requesting comment.

Known for its cave-like interior, the basement room at 11th and U has operated as a nightclub and music venue off and on since 1926, when it was first known as the Crystal Caverns. Among its most famous incarnations, the club reopened as Bohemian Caverns in 1959 and booked many of the era’s major jazz musicians; it was most famously immortalized in a hit live recording by the Ramsey Lewis trio. For 10 years in the aughts and 2010s, a management group headed by Omrao Brown operated the basement club while also running a top-floor nightclub and ground-floor restaurant. Under Brown’s leadership, the Caverns played host to international touring acts, acted as a local talent incubator and became a beloved gathering spot for D.C.’s jazz and R&B musicians, as well as spoken-word poets.

The future of the building after Mama ‘San’s five-year lease is up remains an open question. Davey Yarborough, president of the Washington Jazz Arts Institute and the retired longtime jazz program director at the Duke Ellington School of the Arts, has publicly expressed a desire to get the space designated as a National Historic Landmark. In a recent phone interview, Yarborough said he envisions a living museum, where the historic basement jazz club would return as a fully functioning venue and other parts of the structure would become a “listening and visual library,” with space for WJAI educational initiatives on the top floor.

Afshar said he reached out to Yarborough earlier this year after hearing about his idea, out of respect for Yarborough’s commitment to the D.C. scene. The two sat down to discuss the idea, and Afshar warned Yarborough about his commitments to the now-current lease holders. Afshar said he articulated concerns over potential “financial issues” related to the landmark project, but expressed interest. He said Yarborough promised that additional people were also interested in supporting the project.

For his part, Yarborough acknowledged that Afshar has the option to re-sign Mama ’San at the end of the first five-year lease; he hopes to use that time to build a full proposal for the landmark project, assembling a leadership council, an operating plan, funding from the National Trust for Historic Preservation, capital to cover any necessary renovations, and a budget.

Afshar “is on board with what I’m trying to do,” Yarborough said. “Now he just needs to see what I can do and what I want to do.”