The huge news swirling around D.C.’s jazz community this week is that HR-57 is moving. What hasn’t been reported is that it might be expanding, too.

Owner Tony Puesan told CapitalBop that the popular 14th Street NW jazz club is set to relocate across town at H and 9th Streets NE, the heart of the popular Atlas District. And if all goes according to plan, Puesan will open a complementary blues joint only four blocks away.

“We’re thinking about doing a blues club,” he said, “but we have to work out the lease.”

This would be a major value add for the city’s arts and music scene, which has little in the way of blues offerings. The District’s only just-blues club is the Zoo Bar Café, a tiny dive across the street from the National Zoo.

The addition would also bring the 13-year-old venue into line with its official name (HR-57: Center for the Preservation of Jazz and Blues) and mission statement (to “traverse the full spectrum of the jazz and blues experience”).

Puesan says the move could come as early as January, and he’s already begun construction on the new jazz venue. He has workers getting things “plastered, finished, painted and installed,” he said, and he’s applied for a liquor license.

HR-57 will be leaving behind its 14th Street location. Giovanni Russonello/CapitalBop

The reason for the move is that, since Puesan sold the building three years ago where HR-57 is located, his rent has simply gotten too high, he said. He liked the looks of the space on H Street, as well.

It bears noting that HR, one of the most populated and appreciated jazz venues in town, is the second beloved bop club to announce its disappearance from the U Street corridor in recent months. (Café Nema closed its doors in October.)

And surely, many who’d grown accustomed to HR’s presence near Logan Circle will share the sentiments of local blogger Prince of Petworth: He called himself “destroyed by this news.”

But, as tenor saxophonist, HR-57 regular and Northeast D.C. resident Elijah Jamal Balbed points out, what goes up in one place comes down in another. “Well, I just moved to Northeast and I’m pretty excited to see a jazz club moving there,” he told CapitalBop. Presently, “there’s no real jazz club” on H Street.

Who knows, maybe in a few months we’ll be calling HR-57 “the center for the dissemination of jazz and blues.”

Updated 11.30.10: Michael J. West at the City Paper posted a couple shots yesterday of the new HR-57 space on H Street (the jazz spot, not the blues one, which Puesan still has not yet finalized). 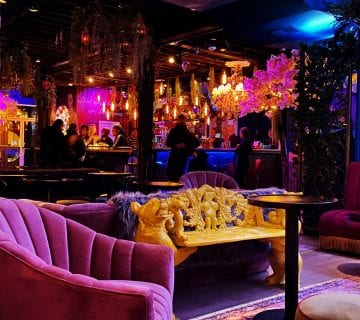