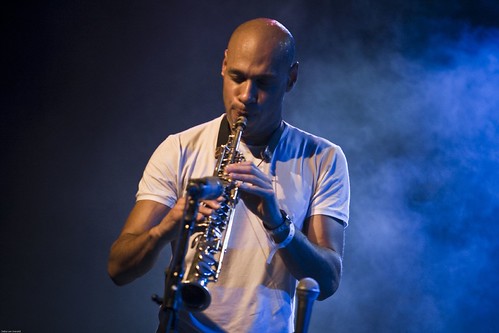 Now in its 22nd year, the Rosslyn Jazz Festival has developed into one of the D.C. area’s most anticipated musical events. Taking place outdoors amidst the tall buildings of downtown Rosslyn, Va., just across Key Bridge from Georgetown, over the years the festival has featured some of the most popular names in contemporary jazz. Best of all, it is free. For us here at CapitalBop, the festival holds a special place: We officially launched our website at the festival in 2010, when Jason Moran and the Bandwagon and the Bad Plus performed. (We did an interview with Moran and his band that day; you can watch it here.)

This Saturday, yet another lineup of premier jazz artists will be gracing the stage in Gateway Park. Just keep an eye on the weather – there’s a chance of thunderstorms this weekend, so cancellation is a slight possibilty.

As the son of jazz and saxophone legend Dewey Redman, it might have been easy for Joshua Redman to get lost in the shadow of his father. On the contrary, over the past two decades he has emerged as one of the most acclaimed and innovative saxophonists of his generation. He was exposed to a wealth of music in his youth in Berkeley, Calif. His artistic parentage contributed to his development (his mother was a sometime dancer), as did the rich cultural diversity of the region, which exposed him to music from around the world. Redman graduated from Harvard University with a degree in social studies and moved to Brooklyn, where he quickly became engulfed in the jazz scene there. Numerous gigs with the luminaries of the time in the late 1980s and early ’90s culminated in his winning the Thelonious Monk Jazz Competition for saxophone in 1991. It was only then that he decided not to attend Yale Law School – where he had been accepted – and instead to seriously pursue a career in music. Redman’s subsequent record deal with Warner Brothers placed him firmly in the mainstream jazz community, granting him the exposure he deserved. Now he is one of the most recognizable jazz saxophonists, as famous for his masterful straight-ahead post-bop improvisations as he is for his explorations of groove-based idioms. He recently co-founded the exciting all-star quartet James Farm, which released a critically acclaimed album last year. At Rosslyn, he’ll lead his own combo.

Multi-instrumentalist and composer Don Byron has achieved the status of jazz legend in a career that dates back to the 1970s. Throughout that time, he has explored many facets of jazz history through recreations and tributes to many forgotten and underrepresented forms in the music. Through these historical explorations, he has also developed a strong dexeterity on a range of instruments in the clarinet and saxophone families. As a sideman, he has recorded and performed with other members of the vanguard in jazz and other genres, from David Murray and Anthony Braxton to Alan Toussaint and Bill Frisell. At the Rosslyn Jazz Festival, Byron will bring his New Gospel Quintet, which explores his spirituality and in-depth study of gospel music.

One of the most dynamic vocalists in mainstream jazz today, René Marie has received some of the highest honors in jazz, including the coveted “crown” rating in the Penguin Guide to Jazz. She began her professional career at 42, landing gigs in and around the D.C. area. Most notably, she was “discovered” while singing at the legendary Blues Alley and was signed to MaxJazz, with whom she has recorded four albums. Her music is often charged with political consciousness and her own self-awareness as an African-American woman in jazz. A gifted performer and conceptualist, she has also produced one-woman shows to explore feminist issues and society. Her latest album, Black Lace Freudian Slip, was released on Motéma in 2011.

Howard University’s a capella jazz vocal ensemble, Afro Blue made a name for itself on the national stage last year, when it was featured on NBC’s “The Sing-Off.” None of the members who participated in that contest remain, as they have since graduated, but the legacy and momentum still lingers as the next generation of gifted vocalists emerges. Led by Connatrie Miller, the ensemble has received awards from critics and music institutions and adoration from thousands of fans. This ensemble is certainly one of the premier vocal groups – not just among college ensembles, but in the music industry at large.