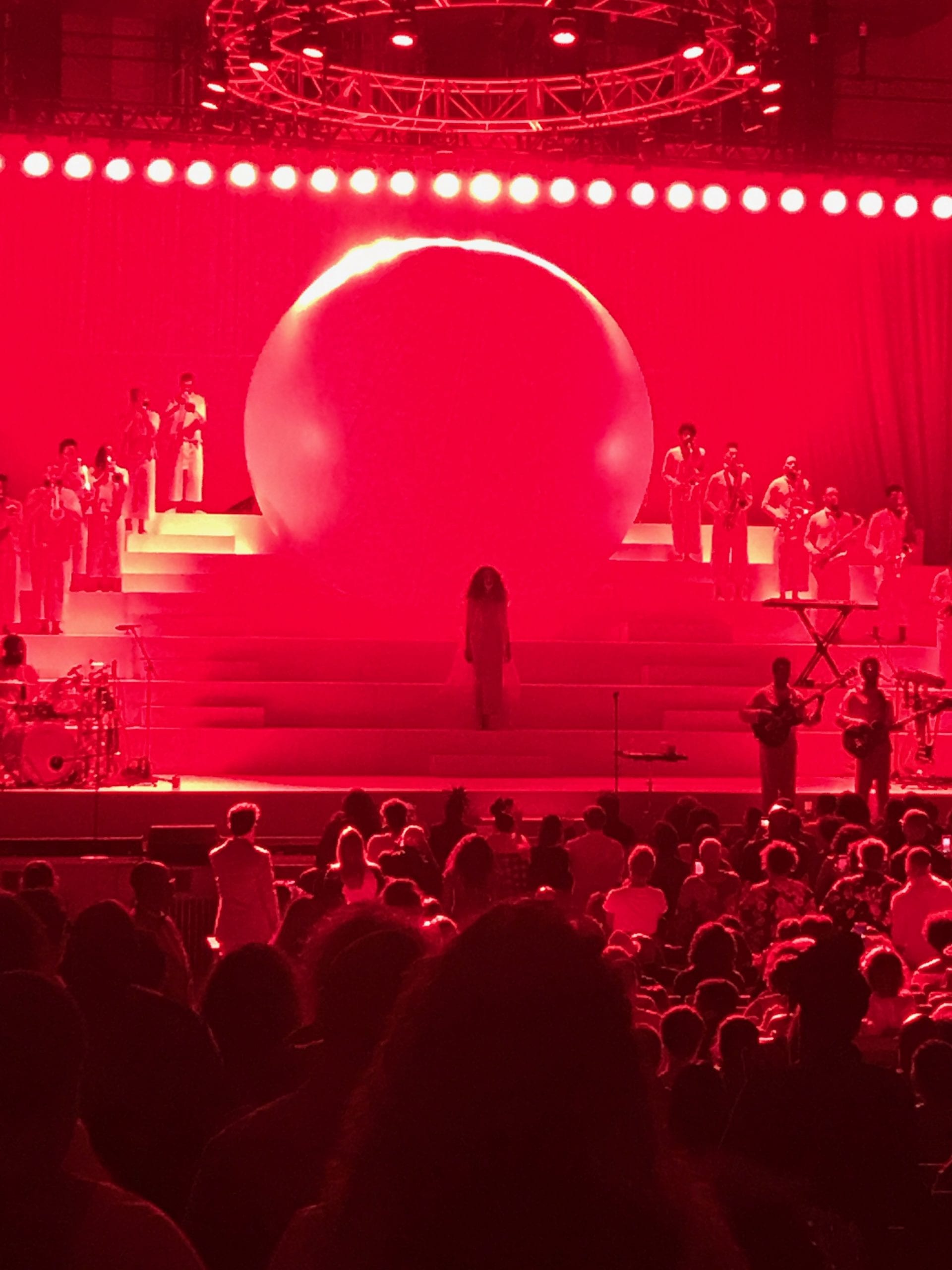 Solange performed recently at the Kennedy Center in a double-bill with the Sun Ra Arkestra. Photo by Jackson Sinnenberg/CapitalBop
Live reviews

“You can’t have the White House without the Black House. You can’t have something without its opposite.” The groundbreaking Afrofuturist musician, bandleader and philosopher Sun Ra spoke these words, captured in Robert Mugge’s 1980 film “Sun Ra: A Joyful Noise,” as one of many offerings of wisdom from an otherworldly mind trying to help those humans who would listen become more fully human. Vocalist and rising cultural force Solange Knowles appeared on a double bill with the Arkestra on Sunday, Oct. 1, at the Kennedy Center, and her set embodied the power of Ra’s wisdom in its own way, creating a new kind of “opposite” through every hair whip, twerk and soaring note belted from the concert-hall stage.

Solange had titled her performance “Orion Rises.” In much the same way that French director Marcel Camus reinvented the Greek myth of Orpheus and Eurydice for his 1959 Brazilian film, “Orfeu Negro,” or “Black Orpheus,” Solange has seized the Orion warrior myth, transforming and transcending it. The “Orion” that rises is Solange’s: Black Orion, a fierce femme warrior, wielding her towering voice as a weapon, that fights for “A Seat At The Table” for her people, among other things. Drawing material almost exclusively from her enthralling 2016 concept album (named “A Seat at the Table”), Solange presented her musical testimony in 75 minutes, sharing her own emotional struggles in the rawest form while simultaneously transforming those experiences into strength and wisdom to be absorbed by the audience. It’s the kind of encounter that Sun Ra strove to impart — albeit in a slightly more esoteric fashion — with each of his seemingly offbeat but spiritually enriching concerts.

Ra’s influence could be felt across multiple aspects of “Orion Rises” — which was a kind of performance art as much as a concert—including the stage which was like a massive temple of pyramids and planets, but with the aesthetic of a 1980s music video and the endearing camp of a 1970s prog rock stage show.

The Arkestra, all 14 members bedecked in dazzling, futuristic pseudo-Egyptian robes, instruments and outfits gleaming like a desert sunrise, continues to strive and thrive, 24 years after Ra’s return to his home plane. Under the directorship of alto saxophonist Marshall Allen, 93, the group’s music these days tends towards the more melodious aspects of Ra’s repertoire, but it hasn’t lost the avant-garde, exploratory spirit that always animated his work. This touring line up, featuring an assortment of seven horns and winds, two percussionists, drums, bass, guitar, keyboards and vocals, brought the joyful noise of their free yet focused cacophony to the concert hall. More than experimentation and exploration, the Arkestra focuses squarely on transformation. To the uninitiated, the sound can be overwhelming, as if Thelonious Monk melded his lyrical melodies and angular harmonies with Cecil Taylor’s most atonal performances. But there is no experience quite like seeing those almost painful gaps in tonality and timbre weave together into a sound that is pure and divine. You could see it in the audience, as they heard the clashing, dissonant harmonies of staples like “Queer Notions” or “Angels and Demons At Play” resolve into breathtakingly beautiful and calming music. As Allen and the Arkestra wove controlled chaos and Tara Middleton sang of sunrises, stars and the spaceways — breathing new depth and divine joy into these numbers — some kind of understanding seemed to dawn on faces across the crowded concert hall. There is stupefying beauty that comes from bringing jarring discord into loving harmony.

Solange followed the Arkestra with a performance that shared that philosophy. But where the astro-jazz big band mixed free, swing, traditional big band and straight-ahead jazz with underground electronic music, Solange united the tributaries of soul, R&B, hip-hop, gospel and other evolutions of black vocal performance into a singular river. That mix gives the singer enormous flexibility in concert. She can lay down a Queen Latifah-esque anthem of self-empowerment like “F.U.B.U.,” then segue into a Janet Jackson-meets-Toto, buoyant and bright dance-pop party number, like “Losing You.” If Solange was going for the full spectrum of musical emotions — from Kendrick Lamarian apocalypse to Carly Rae Jepsen-like cotton-candy joy — she certainly accomplished that.

But if Solange seemed to be trying to accomplish something, it is the space, the seat at the table, for her and anyone else who pleases to be a Black Orion. “They don’t understand / What it means to me,” she sings on “Don’t Touch My Hair,” the anthemic finale of the night. “Where we chose to go / Where we’ve been to know / They don’t understand.” Her two-piece horn section, which sometimes expanded into a celestial horn choir of a dozen members or so, often felt like it moved beyond playing classic horn lines, instead sounding like sirens wailing and sighing across a starry night. The dance parties she encouraged from the stage; her spontaneous bouts of twerking; all the funk, soul and groove that emanated from the musicians on stage — it all represented Solange trying to fulfill the cry she makes on “F.U.B.U.”: “All my niggas in the whole wide world / Made this song to make it all y’all’s turn / For us: This shit is for us.”

But coming back to Ra’s wisdom — “You can’t have something without it’s opposite” — what Solange and the Arkestra truly revealed in their double performance was that the opposite of our current society is possible. The opposite of our world — in which Nazis march openly on U.S. streets, in which the 45th president of the United States says there are “very fine” people amidst genocidal nationalists, in which we can’t seem to agree that Black Lives Matter — is the world beyond the stars. It’s the time and space proposed in the music of Solange and the Sun Ra Arkestra. What Black Orion and the space-faring orchestra play for — the reason why they resist the apathy and chaos of 2017 — is a world in which a woman’s joyful and genuine dancing and imaginative instrumental music can exist in freedom, liberated from scorn or condemnation.

The last nugget that Sun Ra leaves for us to chew on in Mugge’s documentary is this idea: “Everything that is unknown is part of the myth, and I’m sure the myth can do more for humanity than anything they ever dream is possible.” From the steps of her starship temple on the Kenney Center’s stage, Solange embodied a kind of myth, showing that the unknown — a world of true harmony and beauty — is possible.