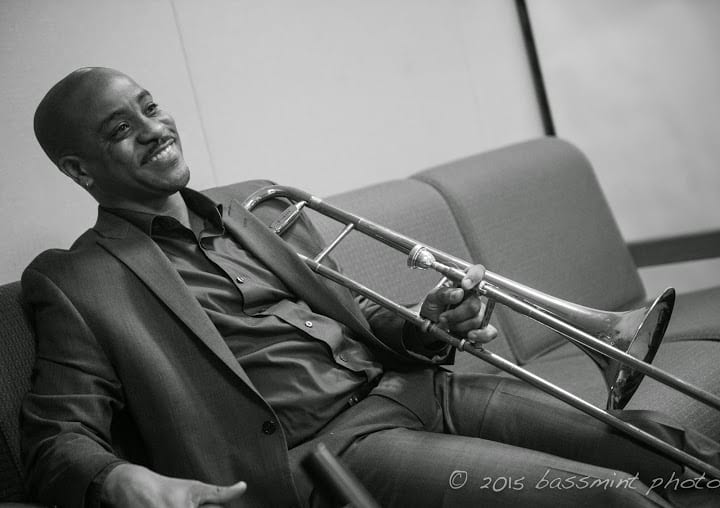 Trombonist Reginald Cyntje brings a worldly wisdom to all his musical endeavors. Pulling together influences from his native U.S. Virgin Islands with gospel and modern jazz, his music cuts straight to your core, demanding self-awareness and shaking loose your defenses.

Cyntje’s newest album, Spiritual Awakening, is due out May 4. It comes in the wake of last year’s excellent Elements of Life, which was the City Paper’s favorite jazz album of 2014 and was near the top of our own list. While that album was an extended ode to the natural world, Spiritual Awakening celebrates the search for consciousness and oneness within. And as is always the case with Cyntje’s projects, it features some of the most talented minds on the D.C. scene: Allyn Johnson on piano, Brian Settles on saxophone, Herman Burney on bass, Victor Provost on steel pan and Amin Gumbs on drums.

On Spiritual Awakening, elements of island life shine through; Cyntje is introspective, community-driven, and focused on liberation—all while holding onto the laid-back energy of someone who’s most comfortable sipping sorrel on a beach somewhere. But he’s got a funky, intellectual vibe too, reminiscent of Herbie Hancock’s Head Hunters band.

Today we’re excited to debut “Atonement,” track three on the forthcoming Spiritual Awakening disc. It floats between the pains of the past and hopes for future resolution, with bassist Burney laying down a heavy layer of funk underneath. Listen for Christie Dashiell’s fine-leather voice, Cyntje’s pleadingly melodic solo and Brian Settles’ song cry on tenor sax.

Stream the track below, then mark your calendar: Cyntje will celebrate the album’s release with a performance at Bohemian Caverns on May 17.