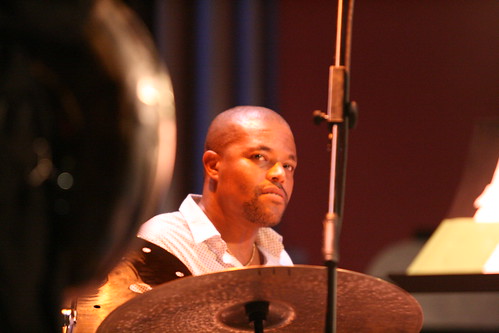 We’re just two days away from the DC Jazz Festival (CapitalBop will post a full preview of that later this week), which means that CapitalBop’s D.C. Jazz Loft Series at the festival is almost upon us. This weekend, we’ll host two consecutive performances at local galleries by some of the country’s most impressive, inventive musicians. On Friday, the loft series kicks off at the Dunes, with a performance by the Todd Marcus Jazz Ensemble and D.C.’s Christie Dashiell Quartet (a video preview for that is coming shortly). Then on Saturday, the New York City-based super trio Tarbaby is at the Fridge alongside the District’s Kris Funn & Corner Store.

Click for discounted, advance tickets
to Tarbaby’s show on Saturday

In this video, Waits talks with CapitalBop at his music studio in New York, discussing the group’s energy and what Tarbaby seeks to convey with its music. Head over to CapitalBop’s Facebook page and share this video, and you’ll be automatically entered to win a pair of free tickets to Tarbaby’s show at the Fridge on Saturday.